You know it's getting bad when you have to literally open your eyes with your fingers in the morning.

In other news, it is currently 56 degrees and raining. Freaky. That will change to ice, then 6-10 inches of snow, then below zero temperatures, and all within the next 36 hours. Whee!

We have plenty of milk for coffee though, so we can ride the storm out. If only I could sleep through it like a bear. 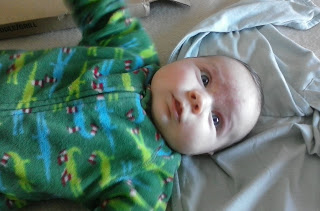 Fat chance, Mama Bear. I need my milk, too.

Labels: all about me, baby stuff, Poppy, the great white north, weather


Yesterday, it looked like A. stopping, unasked, in the middle of his 250-mile drive home from Blackrock to get me lettuce at the incredible produce store that I love but never get to go to. And remembering to get both the red leaf lettuce AND iceberg*, because then when the red leaf lettuce is gone, the iceberg will still be good for awhile.

This is the sort of thing one appreciates when living 25 miles from the nearest source of fresh greens in the winter.

He also got a bag of some sort of new New York State apple variety that claims to be always crisp, because I constantly bitch about the mealy apples I end up with from the store.

Grand gestures of affection are nice, but little acts of consideration are even more important.

* Usually I get romaine, but with the reports of e. coli lately that might or might not be from romaine lettuce, I've been opting out. And A. remembered that, too.
Posted by Kristin @ Going Country at 4:21 AM 4 comments:

Labels: all about me, fun with food, the A team

The Downside to a Thaw


The January thaw has commenced. It got above freezing yesterday for the first time in many, many weeks. Hooray!

I noticed a spot on the bedroom ceiling last night that looked suspiciously like a leak. I pointed it out to A.. He agreed that it hadn't been there before, then walked out of the bedroom and got dripped on by another leak in the living room. Further scrutiny revealed several places where water was coming through the ceiling.

Part of the ceiling upstairs is paneled. That was where the drips were coming down. In the places where the drywall was getting wet, there was just a wet spot.

A. went up into the attic and found that the entire underside of the roof was covered in ice, which was now melting.

I notified our landlady, though there doesn't seem much to be done about it. The dripping has mostly stopped, so she just asked that we let her know if it gets any worse.

The upside is that this is not our house, so any water damage is not our problem. Yay for renting.

Another upside is that our furnace is still working.

Plus, our plow guy showed up with his front-end loader to clear the enormous snow drifts from our driveway, thus ensuring Jack's entertainment for the morning. 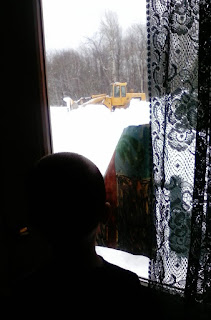 You know you live in a place with Serious Winter Weather when your plow guy uses earth-moving equipment to clear snow.

This means we'll have a(nother) giant mountain of snow waiting for Cubby and Charlie when they get home from school. Let the good times roll.