Me: Too bad Jack's gotten to that stage where he likes to try to run to the road all the time.

Charlie: If you and Grandma and Daddy and Cubby were all dead, and just Jack and I were alive, I would have to keep him from going into the road and getting runned over.

Me: Well, he's lucky to have so many people who can look out for him.

Charlie: But what if I were dead too?

I had no answer to this.

Charlie: Then I guess Jack would just go down to the road and get runned over and then the WHOLE FAMILY would be dead.

A Good Mop Is Hard To Find

I seem to be cursed with mops. This is unfortunate, seeing as how I have three small children that constantly spill things on the kitchen floor (along with their father and his near-constant coffee spilling . . .), leaving me with a kitchen floor that more or less ALWAYS needs mopping. I should do it every day. I don't.

Partially this is because I really don't like mopping, but also it's because I never seem to have a satisfactory mop. I prefer the sponge mops, because they're simple to use and light. A bought me one a few months ago. I mopped at least once a week because it was so easy and worked so well . . . until it didn't. There was this weird design flaw where the inside part kind of untwisted and the head fell off and there was no way to thread it back on because the screw part was on the inside.

I only know this because I asked A. to put it back together for me and he spent, no lie, 45 minutes messing around with the thing before I finally grabbed it and threw it in the trash. I wasn't even the one trying to fix it and it was making me mad.

It didn't fit. OF COURSE IT DIDN'T. They probably change the design every few months or something so you have to buy a new mop.

This left me with a string mop the MiL had bought awhile ago. It had all these screw parts I couldn't figure out and it was so long that it didn't even fit into my bucket.

THIRD FAIL AND SCREW THIS.

I ended up on my hands and knees scrubbing the kitchen floor with the useless new replacement head because I couldn't return it and it works okay as an extra-long sponge. There was a lot of swearing.

But at least my kitchen floor is clean now. For about an hour.

Labels: all about me, confessions, country wisdom, domesticity, randomness

What Happens When It Gets Hot


Well, I suppose 73 degrees is only "hot" if you live in a place accustomed to ice on interior house walls. But it felt hot to us.

Luckily, we know how to adapt. 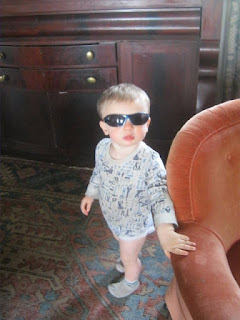 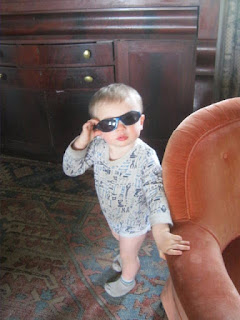 Add some shades. Good to go.