There was a new vendor at the tiny farmers market in the tiny village I pass through on my way to the dump. I had stopped by to pick up some tomatoes, with some vague idea of making Finny's tomato sauce if I got enough. The very friendly young woman at the new booth (which, yes, makes me feel about a hundred years old to say, but she was young--like 23 or so) had various quart-size containers of tomatoes and so on for two dollars each.

I asked her for the container of Romas, and she asked, "Do you sauce?" I replied in the affirmative, still looking at cucumbers and green beans and other things. "Do you sauce?" she asked again, a little more forcefully. "Yes," I said, looking directly at her this time and wondering if this was some kind of code and she was going to hand over a bag of weed or something.

Instead she asked me if I wanted a whole box of Romas for twenty dollars. I didn't quite have twenty dollars, though, so I asked her if she would be there next week. And then she lowered her voice a little and said, "You can have the box for fifteen."

Deal. I have a LOT of tomatoes now and a lot of Finny's tomato sauce in my future. Plus, I feel like a member of a secret club.

Cubby and Charlie are at this very moment hunting in the gully. This is the small gully right outside the garden fence. Cubby spent about an hour sitting in the brush there yesterday, scoping it out. He had great plans today to get a chipmunk, because it was the only animal unwise enough to get close to him. Charlie is also along for the hunt.

I didn't know Charlie was with Cubby, however, so when I yelled for Cubby to ask if Charlie was there, too, the reply was, "MOOOOOM!!! We're hunting! You're making me scare off the animals!"

Two minutes later, Cubby appeared to put Mia inside, because she was also impeding the Great Chipmunk Hunt.

I can even now hear Cubby yelling, "Otty! Come here!" I expect Otty will also be banished to the house in the next minute or two.

Nothing gets in the way of a boy and his chipmunk hunt.
Posted by Kristin @ Going Country at 11:55 AM 4 comments:

Is Brad Pitt still a thing? Do the paparazzi still stalk him? Or is it now someone like Justin Bieber?

Hell if I know. I have three kids under six. I'm pretty much the definition of unhip.

Charlie is not down with the photos these days. If I sneak up on him, I might get a couple before he realizes I'm there with the dreaded camera, but then . . . 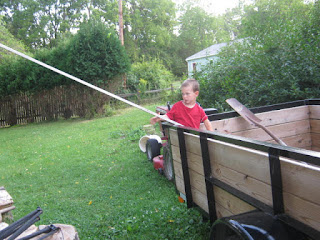 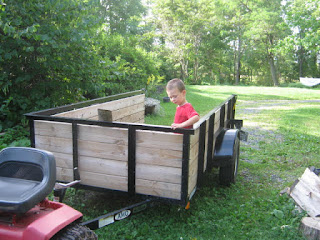 Captain Charlie at the controls. 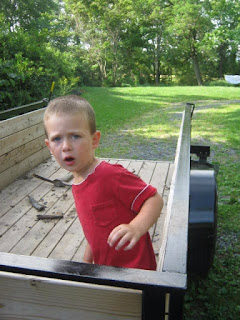 I expect to hear from his lawyer any day now.

The Magic of Five Years Old

When a foam build-your-own-superhero-mask from the local library and a floral pillowcase clothespinned to your shirt have transformative powers. 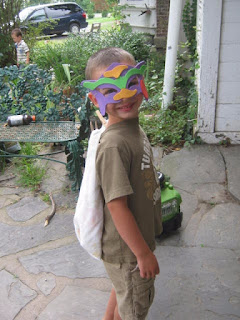 "Mom, wearing this mask and cape really makes me feel like a superhero."

Love it. And him.