After getting the medical all-clear for both me and the new addition this morning, A. and Jack--who was most assuredly not going to be left behind again, thank you very much--showed up at the hospital with an infant car seat and we were off.

We had to stop at the butcher on the way home so I could give my instructions for cutting up the half cow we bought, because I may be recovering from childbirth, but I know my priorities.

When we got home I found balloons on the mailbox, a welcome home sign on the front door, a plate of freshly baked oatmeal chocolate chip cookies tied up with ribbon (and I didn't even have to clear any snow!), and a bouquet of flowers on the table.

I was particularly touched by the bouquet of flowers after Nana explained that she and the two older children had gone to two neighbors to ask for flowers from their gardens--this not being a place where one can easily buy flowers--and the two ladies gave her the flowers they had cut before the first freeze and had in their own homes.

The first thing I did upon arriving home was eat some yogurt with maple syrup and blueberries. I'm pretty sure the "yogurt" I had at the hospital (which was a popular name brand kind) isn't even the same food as the kind I make.

Shortly thereafter, A. put Jack down for a nap, Nana took Cubby and Charlie for a walk, and Poppy blew out her diaper.

But after cleaning up the explosion and nursing her back to sleep, I got to lie down myself for a nap in my own bed, which was even more satisfying than eating my own yogurt.

Currently, Poppy is still sleeping (newborn gold star for her), the older three are at the playground with SuperNana and A., and I am sitting in a quiet house drinking seltzer.

All is right with the world. 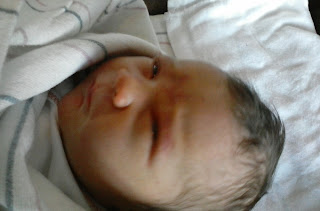 This photo was taken at the hospital, which accounts for the disgruntled expression. Well, that and the fact that all newborns look like grumpy old men. But check out the hair! Poppy has great hair. She gets that from her mother.

Labels: all about me, baby stuff, family, Poppy, the A team

A Child Is Born

4:10 p.m.: Apparently, a pregnant woman having a contraction in the middle of the admitting procedure will cause an aide to show up with a wheelchair right quick.

4:15 p.m.: The midwife does an internal check and tells me to let her know when I feel like pushing. 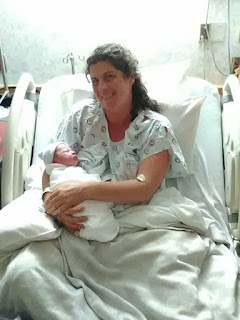 Yup, exactly 3 hours and 25 minutes start to finish. It's definitely a girl. You can call her Poppy*. She was just a hair over 8 pounds, is 20 inches long, and her hobbies include nursing. A lot.

So now we just nurse and recover. And in my case, revel in not being pregnant anymore. Hooray.

Yesterday was a good day.

* Not her real name. When I first found out I was pregnant, I looked up my due date on one of those baby websites and it informed me that my baby was the size of a poppy seed. We called her Poppy early on, and although at some point that changed to Buttercup while she was in utero, I still think Poppy is a better blog name.

Labels: all about me, baby stuff, family, Poppy


As a compulsively punctual person, I think it's clear that I'm going to have to have a serious talk with this little lady baby whenever she finally makes her appearance. Two days past her expected arrival already? That's just not going to be acceptable in our family*.

Plus, I would really like to be able to bend over to tie my shoes without a feeling of imminent suffocation.

And that's our grumpy update for the day. Carry on.

* My mother's sister, who is Very Southern, remarked that the baby is just arriving fashionably late. I am, lamentably, far too much of a Yankee to be so comfortable with the idea of tardiness being the way to make a good entrance. Especially for overdue babies. But I thought that was a funny comment anyway.

Labels: all about me, baby stuff


We've finished up the absurd quantity of cheese from last month, which means those seventeen pounds didn't even last quite one month. In fact, the mozzarella was finished last week and A. already bought more of that. Now he has to go back for another insane cheddar brick.

At least we won't be deficient in calcium.

Also, today is my official due date, which doesn't seem to be impressing this baby at all. I'm going to the midwife this morning, so maybe something dramatic and exciting--you know, like birth--might happen today. Or maybe we'll all just sit around waiting some more, with everyone eyeing me like a ticking time bomb and the kids saying, "But I thought the baby was supposed to come TODAY."

Good times all around.
Posted by Kristin @ Going Country at 3:41 AM 5 comments: