Welcome to Camp Blackrock for Boys

Cubby had a friend over to play this morning. The friend hopped out of his car and asked, "Where are the spears?"

He's been here before. He knows what to expect.

Over the next three hours, those two boys plus Charlie did the following things:

-Set a (questionably effective) deadfall trap under the copper beech tree on the front lawn.

-Dug potatoes and leeks in the garden. 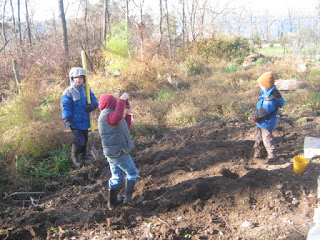 -Hauled a sled-load of wood from the shed to the big woodbox by the dining room door. 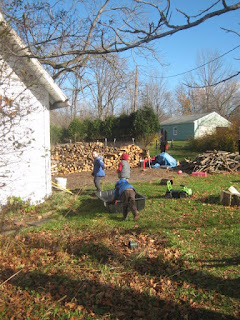 That utility sled is a three-boy job.

-Ate the potatoes and leeks they dug from the garden. After I cooked them with bacon and cheese, that is.

-Made and hunted with spears in the pasture, which involved commando-crawling through the grass. It was a very serious endeavor, although not ultimately successful.

-Climbed the persimmon tree in the pasture to harvest and eat a few persimmons*.

-Climbed around the old barn foundations and dragged out a fairly large sapling.

-Sawed the sapling into smaller lengths to make bows.

The bow-making was interrupted by Cubby's friend's mom arriving to pick him up. But he'll be back to finish the job, I have no doubt. Boys always want to come back to Blackrock. Maybe girls would, too, but I wouldn't know about that.

* Cubby's friend, who had never had a persimmon before, thoughtfully remarked that they taste like sunscreen. Upon reflection, I can kind of see what he means. But then, I'm not a fan of persimmons.
Posted by Kristin @ Going Country at 11:35 AM 2 comments:

The Flip Side of the Coin

Sometimes my children are real jerks--as are all children on occassion--and they say really jerky things. Please see Exhibit A.

But then there are moments like this morning when I dropped Cubby off at school. I picked him up for a hug, as I always do (though this is getting increasingly difficult as he grows ever larger). He wrapped himself around me and said, "I want to stay near your heart forever."

You will, my love. Forever.
Posted by Kristin @ Going Country at 7:04 AM 4 comments:

Labels: all about me, Cubby

A. dispatched the rooster yesterday morning, and I currently have approximately three gallons of chicken stock in my refrigerator awaiting pressure canning.

This was the great excitement for me, of course, but for Cubby and Charlie, who were naturally present for all activity regarding the rooster killing, the great excitement was the wings. A. decided to just whack off the head, wings, and feet and then skin the bird, forgoing all the wretched plucking and saving him about half an hour. This meant there were various parts of the rooster on the table outside while he was doing the skinning.

I'm not sure which child discovered the wings first, but they certainly weren't going to let those wings go to waste.

Cubby currently has a spear with a stone point (that he also made himself in the style of a caveman, i.e., by smashing shale with other rocks), and he decided it needed decoration. 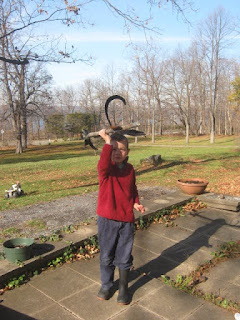 I suspect it will be mostly ceremonial rather than actually useful for hunting, but the feathers are a nice touch.

Charlie elected to keep his wing intact and spread it out to make a shield. 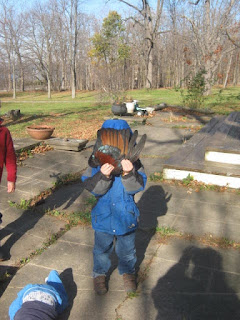 Kind of reminds me of those feather fans I associate with Marie Antoinette for some reason. Not, I think, the idea he was going for.

Jack didn't get a wing, seeing as there are only two on a rooster and he's not even a year old. 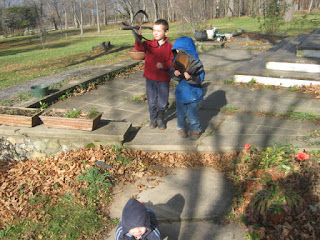 He wisely decided to crawl away from this scene.

Chicken stock for me, feathered battle gear for them. Everyone's happy.
Posted by Kristin @ Going Country at 3:56 AM 1 comment: