Long version: Yes, we are having that tomato salad a lot. That's because we have a lot of all the ingredients, thanks to our produce delivery via Rafael, i.e., the old guy in the truck who we keep seeing and who is apparently having a bumper crop of cucumbers thanks to his windmill irrigation.

I love the fact that people use actual windmills out here to pump water on their properties.

This was the day we drove two hundred miles roundtrip with the whole family so I could go to Walmart to get such exciting things as an outdoor garbage can and a paper towel holder, among many, many other things.

I hate Walmart. I really hated this Walmart. It was incredibly crowded and everyone was of course moving at New Mexico Speed, which is . . . not quickly.

I applaud their apparent disinterest in rushing around, but it does make for difficult shopping. I was in there for two hours. It was terrible.

I am happy to have the paper towels up off the counter, though.

Also, I passed a stand on the road there that had tomatoes, corn, green beans, and peaches from Colorado, so of course I stopped to get some.

Anyway. We were pretty late getting home, so I needed something quick to cook. Thus, pork chops.

Long version: The sole restaurant in town catered this event, and we were pleased to find that their food is really good. It was almost the same as the cowboy feed we went to the weekend before, but better. They offered shredded beef, pinto beans, potato salad, and pickles. Plus something for dessert that I didn't even look at, because the kids had been eating candy and drinking Gatorade and soda all afternoon. They definitely didn't need any more sugar.

Long version: Neither A. nor I like chicken drumsticks, though the children love them. Unfortunately, I also do not like Snappy Grillers, so I was out of luck with this meal. I mostly ate vegetables. The zucchini--also courtesy of Rafael--was a really big one, so I cooked half of it, then grated half of the other half to freeze, then diced the remaining quarter also to freeze.

I feel so much better now that the stockpiling for winter has begun. Even if it is just two quart bags of zucchini in the freezer.

Long version: It was 85 degrees and not the day to be braising beef, but that was what was on sale. I had some leftover sauce from the goulash last week that I wanted to finish up, so I braised the meat in just onion, bay leaf, and a diced tomato in water. Then I sliced it and added the warmed goulash sauce, saving the broth from the beef for something later this week.

I got exactly one first day of school photo of Charlie and Cubby (with Poppy in her stroller). It looked fine on my phone, but mysteriously uploaded this way: 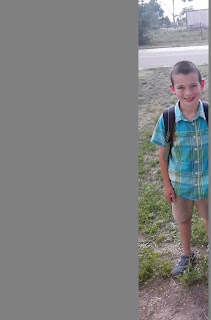 I am so awesome at capturing memories. Way to go, Mom.

Long version: I bought twelve pounds of the pork loin chops two weeks ago (stored mostly in the freezer, obviously) and was still trying to find a good way to cook them so they don't dry out. This was the best way so far.

I cut them into chunks, then browned them on high heat, took them out, cooked a little diced onion and garlic in the pan, added red wine and reduced it, added a little heavy cream and some of the beef broth from the night before, and then put the pork back into the sauce to finish cooking.

It was really good, and not dry. Hooray.

I mixed the cooked pasta with about half a stick of butter, garlic powder, salt, and pepper. The children were happy with this.

I mostly made the mushrooms because I wanted a bit of onion for the pork sauce and then needed to cook the remaining onion so I didn't have a smelly, already-cut onion to store in the refrigerator. It was a good call. The combination of the pork and its sauce, mushrooms, onion, and pasta was actually something like beef stroganoff. Yum.

Long version: Charlie came home from school early because he managed to injure his eye when pulling his folder out of his backpack*. Poppy was having a very fussy day and half the family left for church at 5 p.m. I needed something easy to cook with the ground beef I had taken out to thaw. Taco meat it is.

Charlie ate one taco before retreating back to the master bedroom closet, because it was the dimmest room in the house. Jack started to fall asleep with his head on the table, so I put him in his bed. He bounced out, though, and managed to eat his tacos. Poppy ate a couple of bits of meat and tortilla before deciding the day should be over.

It was not one of our more successful meals behavior-wise, but the tacos were fine. 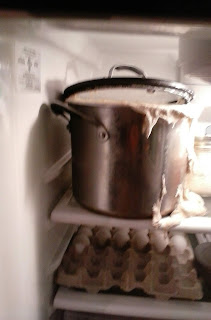 I did manage to subdue it and bake bread, though, which is a good thing because I really ended the cooking week with a whimper here. I roasted the vegetables when I was baking the bread around noon. I made the ranch dressing at the same time, so when it was time for dinner, all I had to do was scramble the eggs and cut up the carrots.


My sourdough has been very exuberant here in New Mexico. I suspect it's mostly the altitude, though maybe there are some other wild yeasts here that are particularly, well, wild.

I don't know. All I know is I put the pot of rising dough in the refrigerator last night to slow it down some on its last rise and woke up to Mt. Sourdough erupting all over the top shelf. The lid had been pushed off and everything. It was a mess.

But at least I know I have an active starter.


One of the two churches--the one we don't go to--in our new village hosts a tent meeting one weekend every August to which the entire community goes. They call it the Cowboy Camp Meeting. There are two actual preaching events, which we did not attend, but there are also a lot of games and activities for everyone.

We were invited to it by no less than five separate people, and of course we went.

The children have never had so much fun. I must say, it was possibly the best small-town gathering I have yet attended.

There was archery taught by game wardens: 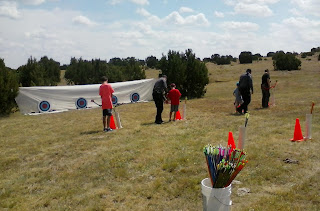 Though Cubby was the only one of the boys strong enough to do it. 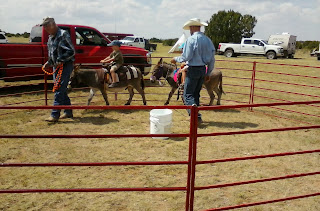 Charlie is there behind the guy with the cowboy hat. 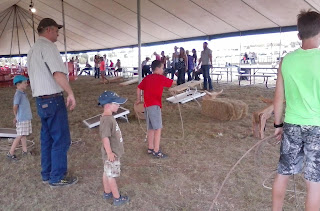 Both Charlie and Cubby tried it. The (fake) cow was quite safe from them, however. 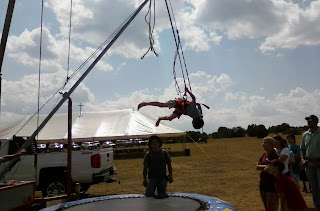 Charlie did maybe eight flips during his turn. He was the only child I saw actually flip. So Charlie. 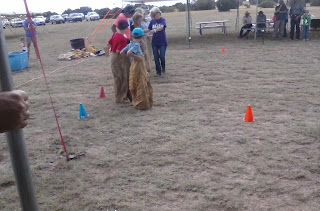 A fenced-in area with toys for younger kids: 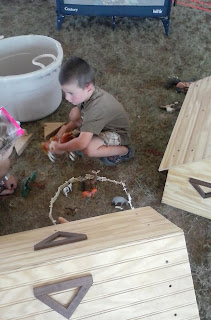 Jack spent much of his time in there playing with the barn animals.

And even baby equipment: 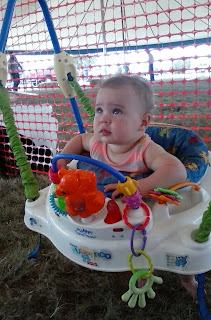 Though Poppy was one of only two babies present, and the only one old enough to actually sit in it.

There were also foot races; a corn toss tournament; a dunk tank much loved by Cubby and Charlie; a team "wild cow" milking contest (wild cow=a goat); tubs of drinks in water with dry ice that bubbled and smoked thrillingly (one of the highlights for the boys); and dinner catered by the local restaurant.

We left after dinner. It was a good way to meet many of our new neighbors, and the kids had non-stop fun for four hours.

Way to roll out the welcome mat, New Mexico.