One thing about moving to the Canadian border is that after about December 1 (or, uh, maybe even before that), traveling any distance becomes a game of chance. Winter weather is Weather with a capital "W."

I've noticed already that we always get at least the amount of snow predicted for our location, and often more right here where our house is. It's usually colder and windier than the national weather site forecast, because the closest official weather station is actually 13 miles away, off this plateau we live on. And this is a place with severe weather.

Whenever I know I have to go somewhere, even just to the large village 25 miles away to get the kids to the pediatrician, as I did on Monday, I start checking the weather as soon as I can. In the case of my pediatrician's appointment, that meant the first forecast I saw for that day, ten days out, was 5-8 inches of snow with ice pellets.

The forecast changed the closer the day came, though, until eventually it said 1-3 inches. No ice pellets mentioned. Okay, I thought, I can deal with 50 miles roundtrip in 1-3 inches of snow.

Except almost all the 3 inches--which ended up being more like 4 inches--fell in the morning just before and during my drive. And the plow hadn't gotten to our road yet. So when I left, I was driving on unplowed roads for the first five miles, and then on a road that had been plowed, but still had a significant amount of snow and slush on it. And it was still snowing.

The drive home was better. But I figure this is the way it is here. Things are not cancelled because of snow, unless it's a real doozy, so I'd better get used to it.

But when people are flying to Montreal specifically to come to visit us in December--as my parents are today for the boys' triple baptism on Sunday--the weather assumes even more importance. Most of their stay is just going to be really cold. Much as my Arizona-accustomed parents aren't looking forward to the 17-degree high temperature tomorrow, I'm sure the 3-5 inches of snow forecasted for Monday is even more unappealing to them.

I don't think it's enough to cancel their flight out on Tuesday morning, though it might make the drive to the airport a little more exciting than they want.

I think it's clear they really love their grandsons.

We just booked tickets to fly out of Montreal ourselves in February for a trip to Tucson. There could be a blizzard. There could be a foot of snow. There could be nothing at all. Oh the excitement of anticipation! Fingers crossed, because it's all you can do when faced with winter travel in the north country.

Labels: all about me, family, the great white north, travelin', weather

Hey, you know the best way to be instantly in the Christmas mood? Live on an actual Christmas tree farm. Then, when you're ready to get a Christmas tree, you can just walk 100 yards down the road and cut one. 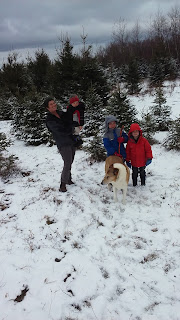 Snow for ambiance is also pretty much guaranteed.

Of course, you still have to lie down in the snow to cut the tree. 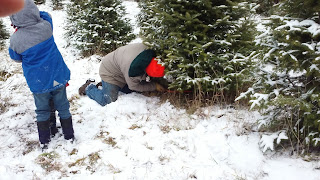 There are also plenty of branches to cut when you decide you're going to be all crafty and make a wreath, forgetting you are not actually crafty and will inevitably give up on the wreath and go with a rustic decorative . . . something. 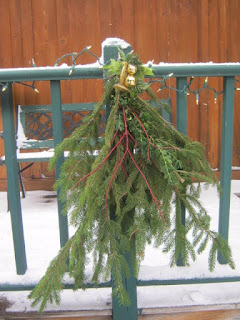 But then, if you've made good choices in life, your husband will notice your despondency over the wreath fail and will take the frame and make a wreath for you. 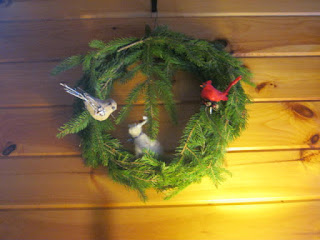 And by "your husband," I mean "my husband," because I definitely made a good life choice there.

Yup, Christmas is fun on a Christmas tree farm. Especially since we don't have to do any of the actual work on the farm.