There are certainly drawbacks sometimes to living the way we live (this comes to mind), but there is no doubt that our lifestyle provides endless entertainment to the younger crowd.  That is, Cubby.

Today's excitement came when A. started his next big project: re-mortaring the stone wall in the Pit of Despair that supports the living room floor. This wall is directly behind one of the cabinets I use to store canned food, so I have the chance to observe the wall with some regularity.  I've noticed for some time that this wall seemed to have . . . gaps.  Holes would actually be more accurate.  It was, essentially, reduced to a dry stone wall.  Not that dry stone walls aren't structurally supportive, but know what's more supportive?  A stone wall with mortar in it.

So A. bought some bags of mortar, dug out the appropriate tools from our extensive collection of antique tools from by-gone generations, and commenced to slapping on some mortar.  Or rather, filling the holes with mortar.  And in some cases, new stones and bricks.

But A.'s many hours of labor with the mortar provided excellent entertainment for Cubby. 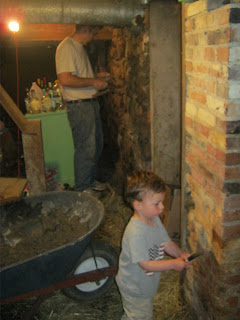 Not that I let him actually use the mortar, because I am a Mean Mommy.

Well, it provided entertainment for about twenty minutes, after which point Cubby got mad because Daddy wasn't done yet and I wouldn't let him run off with Daddy's tools or dump all the mortar on the floor.  And then he got REALLY mad when I hauled him out of the cellar because he was pitching a fit and getting in the way.  And then he screamed and cried for about ten minutes before getting distracted by the two lawn tractors mowing grass over at the neighbors.

But before all THAT, it was fascinating.  As is everything that Daddy does, because it always involves the ever-popular tools.

Who knows what tomorrow might furnish in the way of fun?  Blackrock-style, that is.
Posted by Kristin @ Going Country at 6:07 PM 1 comment:

She Did, He Did

A productive hour or so in the garden this morning for Cubby and me.

I weeded the garlic.  He hammered on the tiller with his big metal spoon.

I spread the muck over the garlic as a mulch.  He "dug up weeds" with his big metal spoon.

I weeded the asparagus bed.  He speared the pitchfork in the dirt so it would stand upright (surprisingly difficult when you're three feet tall).

I patrolled around the still-unplanted section of the garden for clumps of the evil horsemint weed.  He pulled leaves off the two parsnip plants we left in the ground to go to seed.

I pulled out enormous armfuls of garlic mustard growing next to and through the boundary fence by the gully.  He followed behind me, asking if he could eat it and stepping on the tiny lettuce plants.

I pulled up a huge section of yet more evil horsemint near the compost heap.  He ate garlic mustard.

I contemplated the caked mud under my fingernails.  He stuck a forest of bamboo stakes in the dirt to hold up the corn and peas.  (At least, that's what he said they were for.  I didn't have the heart to tell him I'm not planting either of those this year.)

I sat on a stump outside the garden.  He sat down in the wet dirt, scratched up handfuls of the mud and carefully squeezed it in his fists.

We both got really dirty.  But only one of us was actually productive.

Though I suppose that depends on your definition of productivity.

If I throw some photos your way, perhaps they will distract you from noticing that I don't actually have anything much to say about this random collection of Kodak moments.  Except I just told you, so I guess you noticed.

Anyway!  On with the randomness!  Which, of course, all feature Cubby, as that seems to be my only photographic subject these days. 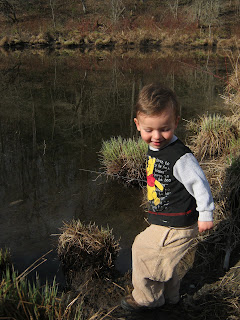 Fishing.  That is, smacking the water with the top section of a fishing pole.  Surprisingly, he did not catch any fish with this method. 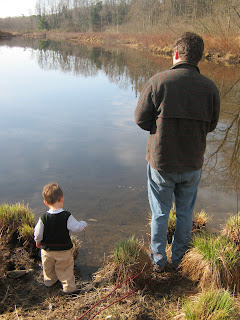 But then, neither did A. with the more standard fishing method of actually putting a line with a hook in the water, so perhaps Cubby is not so foolish after all. 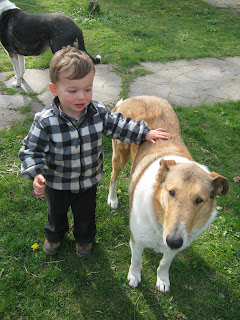 Still buddies, even after all these years (two) and so many indignities.  That Mia is an awfully good dog.  Cubby's not so bad, either.

Happy May Day, duckies!  I'm going to have a baby in less than three months.  Just thought I'd throw that in there so you can all start hyperventilating on my behalf because I haven't done one damn thing to get ready for this kid, including moving his big brother out of the room that will be his when he arrives.  In two and a half months.

With the promised photos, which you should know require me to walk ALL THE WAY up to the pasture.  Emphasis on "up."  I don't really appreciate "up" anymore, in my delicate condition and all. 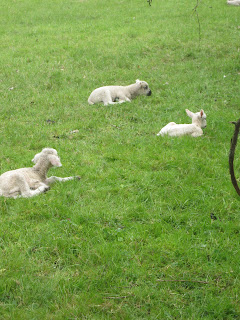 It was apparently naptime in the nursery when I arrived. 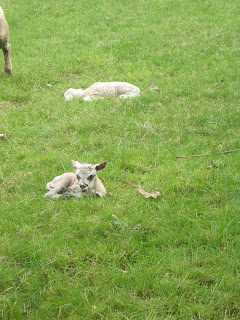 I think this is one of the ones born just yesterday.  But don't quote me on that. 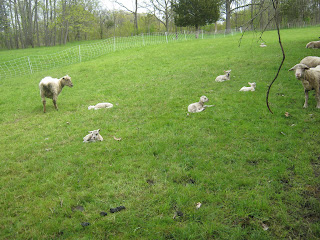 Sure is a sleepy bunch.  They just wouldn't do anything photo-worthy.  I suppose their adorable faces will just have to be enough.

That's a whole hell of a lot of lambs, people.  And there are so many more to come.  At least five more, probably more like eight.  There's a lot of docking in our future.  Whee.

I know how to keep you coming back for more, don't I?  Right.
Posted by Kristin @ Going Country at 5:47 PM 1 comment: