What better way to celebrate the end of a long work week than with . . . more work. It is the Blackrock way, you know.
A. finished up in his office yesterday and decided to start a fire in the sap evaporator to burn up all the incredibly numerous junk pieces of wood that always accumulate with alarming speed around here. So he did. Before long, there was a towering pyre in the evaporator, which A.--and his bottle of hard cider*--monitored and replenished occasionally.
Meantime, I took the laundry off the line and Cubby did some serious pounding with the rusty old ball peen hammer his father had kindly offered him as a plaything.
After the MiL got home, Cubby and I joined her in an inspection tour of the daffodils in the pasture. As well as the very pregnant sheep, some of whom look ready to have lambs any day now. And they all look pregnant. So let's see. Thirteen ewes, several of whom will likely have twins, so that's . . . a shitload of lambs. Yikes.
Shortly thereafter it was time for Cubby's bath and retirement to bed, A. came in from outside, and the workday was done.
Not to worry though. We shan't be too leisurely. Today is a brand-new day, just waiting to be filled with many more tasks. No rest for the wicked, you know. And the inhabitants of Blackrock.
* Not his hard cider, of course. That's long, long gone.
Posted by Kristin @ Going Country at 4:48 AM 1 comment:

The Acquisition of Knowledge

Funny how there are so many things we take for granted kids will know. Like the difference between a rock and a chunk of dry dirt. Cubby and I spent several minutes in the garden today inspecting chunks of dirt, crumbling them up and chucking them at the wall to see if they would break up. If they broke, that was dirt. Dirt stays in the garden. Rocks, which don't crumble up or break on the wall, can be thrown over the fence. Dirt in, rocks out.
So elementary, and yet . . . not. When you're two years old.
Also on today's curriculum: What's a weed (goddamn dock plants) and what's something we can eat (arugula); why only plants and not people go into the raised bed (soil compaction and killing plants); why it's a bad idea to pound on the metal parts of the lawn tractor with a hammer (dents leading to rust) but the rubber tires are okay; why it's best to pull up dandelion plants before the pretty yellow flowers turn into evil, fluffy seeds that try to take over the garden; why blackberry plants require caution (thorns, like the rose bush or a cactus) and on and on and on.
I never thought I would make a very good teacher, yet here I am.
Incidentally, if you would like a child you know to learn about vegetable gardens, the MiL's friend (hi, Becky!) just sent Cubby a great book called Two Little Gardeners. It's one of those Little Golden Books classics, written in 1951 by Margaret Wise Brown, the author of Good Night Moon, and another lady named Edith Thacher Hurd. Anyway, it's a very nice little book all about growing vegetables. It's pretty detailed, and Cubby and I have had many discussions already about all the tools used in the garden (all of which he knows) and all the vegetables grown in the garden (all of which he also knows, and eats).
So this book, along with the A.A. Milne books, gets the Blackrock Seal of Approval. For whatever that's worth.
And now I think I shall go recline on the couch for awhile. It's getting hard to bend over to pull weeds, and my legs are protesting this morning's mild labors already. It's going to be a long three more months . . .
Posted by Kristin @ Going Country at 10:31 AM 5 comments:

Oh, Right. That OTHER Thing.

Here I am blathering on about enormous crowds for Easter dinner* and countrified Easter egg hunts, and completely failing to mention the real news: The tomato seeds have sprouted.
Yes. Despite my incredible laziness in the starting of the seeds and the fact that they wouldn't germinate and then the MiL told me the soil I found in the barn was proved useless last year so I had to take some old soil sitting around in a pot from last year and mix it with some compost and then scoop out the top half-inch of the Useless Soil in which my tiny, impossible-to-see seeds were planted--hoping I was scooping the seeds with the Useless Soil--and just plop that on top of the new/old soil in what is undoubtedly the worst and least professional seed-starting attempt in the history of gardening.
Despite all THAT, the seeds still germinated. Seeds sure are amazing and persistent little buggers.
The most germination came from the seeds I had saved from the Stupice tomatoes last year, which shocked me no end as I was (surprise!) not exactly precise in my following of acceptable seed-saving protocol. That is, I squeezed those seeds out of the tomatoes, soaked them for awhile but I don't know how long because I sort of forgot about them on top of the refrigerator, let them dry out on plates, and then stored them and hoped for the best.
Once again, the seeds will triumph despite my laziness.
I still have more seedlings than I'll need, but that's a good thing. Better than not having enough. And of course, there could still be some casualties. Especially since I'm obviously not exactly obsessing over them this year. But one way or another, there will be tomato plants in the ground in about a month.
Life (and the Tomato Crazy, albeit a subdued version of it) marches on.
* To answer your question Lindsey, there were 25 people. And Tina, the sideboard you asked about is actually called a credenza, I think. There are other pictures of it here and here. I believe it's Spanish in origin and from the 18th century, but my knowledge of antiques is extremely limited. It, like all the antiques at Blackrock, came with the house and was acquired by one of A.'s long-deceased ancestors. The MiL probably knows more about it. She usually does.
Edited to add: The MiL, as I suspected, had some more information on the credenza. She saw one nearly identical to ours in a museum collection that was 16th century Italian, so that's her guess. Maybe we need a whole "Antiques Roadshow" episode at Blackrock . . .
Posted by Kristin @ Going Country at 6:02 PM 6 comments:

A.'s sister was kind enough to bring some dyed eggs for an Easter egg hunt at our house yesterday. Cubby and his second cousin, who is almost a year older than Cubby, were the only children old enough to really participate. And as it turned out, Cubby's cousin was the one who found most of the eggs.
The Easter eggs, that is.
As soon as Cubby realized we were looking for eggs, he took off for the sheep barn, where he crawled right into the chicken nest behind the hay feeder and brought out two newly-laid eggs.
Not the exact idea of an Easter egg hunt, but I can't say I was surprised. Highly amused, yes, but not surprised. That's my (country) boy.
Posted by Kristin @ Going Country at 6:25 PM 4 comments: 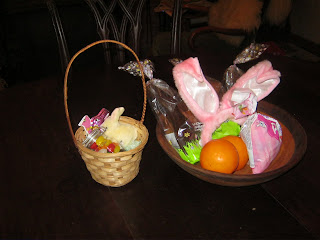 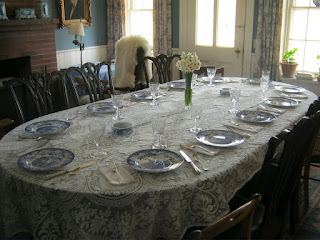 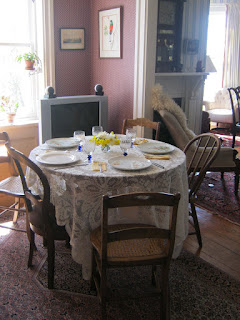 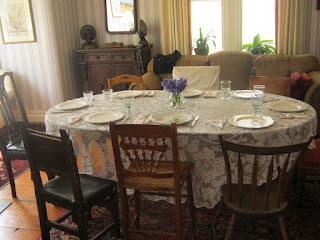