In addition to crawling, Charlie is now pulling himself up on every available stationary object in preparation for walking.

And when I say "every available stationary object," I mean . . . 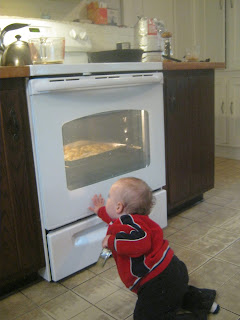 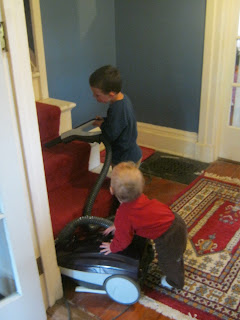 Vacuum. Not entirely stationary, this one. 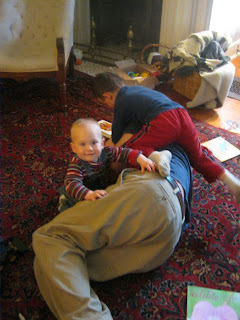 And Daddy. Only stationary for as long as he can stand being used as a climbing wall.

Life around here has become significantly more action packed. And the real walking hasn't even started yet.

This morning when I came downstairs at 5:15 a.m., Mia and Leda were still outside in the dog pen and Otty was still in the back hall. When the dogs in the pen started barking and then Otty started yipping with some agitation from the back hall, I figured there was something significant prowling around outside.

Most likely that damn fox. We haven't lost any more hens to it since I've been vigilant about locking them up at night. Also, the dogs chased it off awhile ago and I think it was a close-enough call that the fox was deterred for a little while. But they always come back.

If A. had been up I might have sent him out with his rifle. But he wasn't up and I don't shoot guns. I do, however, have three quite effective weapons with sharp teeth and no fear. All I had to do was set them loose. So that's what I did. Those dogs shot out of their two enclosures directly to the hollow without pausing.

I don't think they caught whatever it was this time, but I do know that no animal is going to hang around with those three slavering canines charging around.

We have a fairly large front porch. There's a hammock there, and a rocking chair, and a very nice view. There is also, unfortunately, an ever-changing collection of junk that accumulates there. It's mostly stuff that A. takes out of his car when he parks in his accustomed spot directly in front of the porch. The porch is the closest covered spot to dump stuff when he has to clear his car out.

Which is why we've had two bags of salt (for melting the ice on the steps), a huge roll of plastic tubing (for a water heating system that never quite materialized), and four bags of mortar mix (to finish the stone chicken coop that A. started in the fall) sitting there for months. Until I got sick of looking at them and decided to get rid of them.

There were actually many, many more things on the porch, but for this topic, those are the relevant ones. Because they are heavy. They are things I can't easily carry myself in my arms, so I had to use the wheelbarrow to transport them.

The roll of tubing wasn't too heavy, just kind of awkward because of its size. The bags of salt were 40 pounds each, so no big deal to put both of them in the wheelbarrow and  move them around the house to the shed.

But the bags of mortar mix . . . HOLY HELL. The bags themselves are pretty small, but that's only because the mortar itself is so damn heavy. I mean, we're basically talking powdered rock. You wouldn't want to try to carry a big bag of it, that's for sure. Even these small bags were 60 pounds each. And there were four of them.

I carried them one by one down the porch steps and dumped them in the waiting wheelbarrow. Then I tipped the handles of the wheelbarrow up and commenced wheeling.

I realized immediately that I had overloaded the wheelbarrow. But did I stop and take out a couple of bags, reducing my load to a more-sane 120 pounds? No, I did not. Even though I had to rest halfway to the shed and I was a little afraid the wheelbarrow might just buckle before I got there, I did not make two trips.

Because I am a one-trip pony.

If I can possibly do what needs to be done in only one trip, I will do it. Even if it means carrying fifty pounds of groceries looped on my arm, leaving my skin with red marks where the bag handles have cut into me. Even if it means wheezing like an asthmatic because I'm carrying two full laundry baskets stacked together up the stairs.

Even if it means 240 pounds in a wheelbarrow that I'm pretty sure has a 200-pound maximum capacity.

I realize there are many people who are not like this. Who will take multiple trips to save themselves some pain and hassle.

So there's the question, poppets: Do you take multiple trips to accomplish a task? Or do you grimly power through just the one trip?
Posted by Kristin @ Going Country at 5:22 PM 11 comments: