Long version: Still sick of the kitchen after a week of baking, but dinner waits for no woman. I walked into the kitchen at 4 p.m. with no clear idea of what I was going to do with the three pounds of ground beef that were sitting in the refrigerator. I ended up with a skillet casserole comprised of beef, onion, garlic, frozen green beans, red wine, a little ketchup, plus sliced potatoes (cooked first in the microwave) on top that in turn had cheese on top of them. Then I shoved it under the broiler to melt and brown the cheese.

This was a popular dish. I don't know why I bother making anything other than casseroles. I don't think I've yet made one that everyone hasn't eaten.

Long version: Still sick of the kitchen, still no other option besides cooking. Seasoned pork chops and a sliced onion on the griddle pan (salt, pepper, garlic powder, paprika), rice with butter, sliced carrots and broccoli florets cooked in olive oil, and carrot sticks with leftover ranch dressing for the two boys that don't like cooked carrots. Thirty minutes and done.

Certainly nothing exciting, but there were no complaints and everyone was satisfactorily fed. That was pretty much all I was going for. 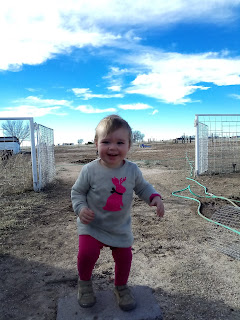 Less baby and more toddler by the day, though.

Long version: A. used the rest of his tripe and hominy to make another batch of his signature stew, this time with pigs' feet. He had put some pork chops in it, so I fished that out for the children. Cubby and Jack tried the pigs' feet, but in the end elected to go with the less-exotic pork chops.

I can't blame them. I wouldn't even try the pigs' feet. They made A. happy, though. And they certainly made a very gelatinous stock. I had to gouge out the leftovers with some force after it had been chilled.

As A. said, "There's a woman who's been where you are." Miss Amelia had five children and I'm pretty sure there were no restaurants around when she had them at home, either.

Anyway, A. went over later in the afternoon--bringing with him a loaf of sourdough bread, which Miss Amelia is luckily very fond of--and returned home with two quart jars of soup and a container of pinto beans. The children and I ate that, while A. had more of his ponudo.

Long version: Browned cube steaks simmered with a sliced onion, a sliced bell pepper, garlic powder, and a can of tomatoes. Does that sound like Swiss steak? Sure. That's what we had, anyway.

Can you guess what A. had? Dingdingding! Yes! More ponudo! And then he had some beef and potatoes.

Long version: I made both an arm roast and some beef ribs by cooking them in a covered roaster for quite awhile at a low heat. Then I sliced the roast, and broiled the ribs to get them a little crispy, adding barbecue sauce on top of both.

I think A. said it best about this when I asked him how the ribs were, "They're okay. I mean, it's meat."

The biscuits were really good, though, as always.

Long version: I made the taco meat out of the leftover arm roast and used the liquid from the roast in the beans. Which I then forgot to actually serve at dinnertime. I did all this in the morning because I was gone right before dinner delivering doughnuts with Cubby and Charlie. The elementary school students sold Krispy Kreme doughnuts to raise money for an end-of-year trip to a city. 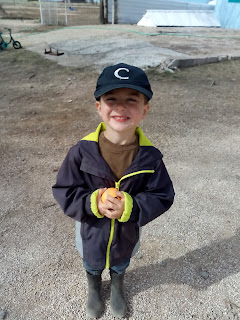 Thankfully, this doughnut selling did not include the preschoolers. Although I bet this face could sell a lot of doughnuts.

Cubby and Charlie sold fourteen dozen between them, and the school as a whole sold an incredible quantity, considering how few people live around here. Everyone in the county is going to be eating doughnuts today. Given that someone had to drive 300 miles roundtrip to pick them up, I hope they all enjoy them.

Anyway. Cubby and Charlie were eating cupcakes to celebrate their hundredth day of school when I got there to pick them up, and Jack took advantage of my absence to beg peanut butter and jelly from his father (as always) so no one was particularly hungry for dinner. They ate, but only because I told them they could each have half a doughnut after dinner. Dessert bribery works every time.

I May Have a Problem


My clock inexplicably lost power sometime last night, and so when I woke up this morning I thought it was time to get up. Then I got in the bathroom and saw on my watch that it was 4:30 a.m., not 5:25 a.m.

You may recall that I try never to get up before 5 a.m., even if I'm awake. So I went back to bed for a bit. But then, of course, I was just lying there thinking of all the things I needed to do when I got up. For some reason this morning, it was the thought of making and packing school lunches for Cubby, Charlie, and Jack that seemed like a crushing burden.

"I don't waaaant to," said my inner four-year-old. "It's too haaaard."

And then I remembered: Hey! They could BUY LUNCH! Yes! This is the solution! I could be lazy this morning and send them to school with notes to their teachers that they would eat the cafeteria lunch just like literally EVERY OTHER child at their school. I checked the school lunch menu calendar (which, yes, I keep on my refrigerator even though they almost never buy lunch) and saw that it was even something they would probably all eat: chicken and dumplings.

So I sat down with my coffee with every intention of ignoring the lunch bags and all those little Tupperware containers and the ice packs and the bread knife and everything else that I use every school morning to pack lunches.

But then, Poppy and I (she gets up early, so it's mostly the two of us in the mornings) went into the kitchen about 6:20 a.m. to start breakfast and it's like my body moved all on its own and . . . made lunches. Peanut butter and honey sandwiches, cheese, and oranges. I sliced the bread. I put it all in the stupid Tupperware things. I even peeled the oranges. And the whole time, I was thinking, "WHY AM I DOING THIS? I was going to have them buy lunch!"

I guess I figured if I had to be in the kitchen anyway making breakfast, then it wasn't that much more effort to make the lunches too.


If you have ever had the pleasure of having a whip-smart kid (or two), you know that they are often very, very funny. Charlie has been my most consistently unintentionally funny child of late. He gave me a Valentine he made at school that said, "Mom, I love you when you . . . give me leftovers."

I just love a low bar.

The other day when Jack was arguing with me about something, Charlie told him to stop arguing with me because I know best. I felt compelled to point out that Charlie himself argues with me all the time. "Yeah," he replied, "But I am always right."

At the school pep rally, the elementary kids--all eight of them--were playing a game of Family Feud. When it was Charlie's turn, his opponent buzzed in first to answer the question, "What shape is a basketball?" "Circle!" she announced triumphantly. Everyone cheered, the person in charge prepared to move on . . . and Charlie grabbed her arm and had a quick conversation with her that resulted in her handing him the microphone and him announcing very firmly into the microphone, "A basketball is a sphere." 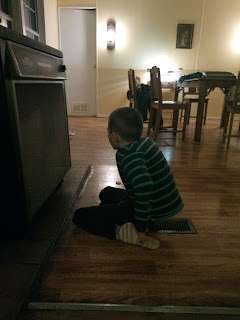 This photo is also funny, as the hot air blowing out of the furnace has given skinny Charlie a distinctly muscle-bound appearance.

And just so we don't leave out that other smart kid we have in residence . . .

The other morning when Cubby was making himself some eggs for breakfast, he informed A. that I discourage him from cooking (totally untrue, by the way). "Because," he went on, "Jack and Charlie like my cooking better and she's jealous."

Yup. Those smart kids sure are fun.