Long version: We had school this day to make up for having Monday off for Labor Day--otherwise, it would have been a three-day week because we usually have Fridays off--so I had to work. But I bet you could have guessed that from the skillet meal.

Long version: Yes! It's the return of the elk! But this was the last bag in the freezer, so it is also the curtain call for the elk.

So I used the cleanest pieces for the elk bites, which were just small slices that I marinated (vinegar, salt, garlic powder, olive oil), then fried in bacon grease with paprika, salt, pepper, and more garlic powder. It had been long enough since we had had elk that all the children were appreciative of it and had second servings.

Absence really does make the heart grow fonder of elk. Or makes the palate grow fonder. Or whatever.

I made the macaroni and cheese with Cubby, using a recipe in a Christopher Kimball cookbook I have. I didn't have the right cheese--only cheap mild cheddar and more of the Velveeta someone gave us. Also, I misread the recipe, resulting in twice as much flour and half as much butter as there should have been.

I am obviously the best person to be teaching Cubby how to cook. Ahem.

The resulting macaroni and cheese was bland and gluey and not particularly appealing, but we had a lot of it. I salvaged most of it for the kids' lunch the next day by frying it in bacon grease and butter and adding more salt and some garlic powder. That made it much more palatable. As you might imagine.

Long version: Usually when I make chili, I use dried chili powder. This time, however, as I was adding the onions to saute, I decided to chop up the half dozen or so peppers I harvested before our cold snap. I don't actually know what kind of peppers they are. A. bought the plants at a nursery, and they were just labeled "mild chilis." So maybe like Hatch chilis? I don't know.

Anyway, when I tasted them raw, they tasted like green peppers with just a tiny bit of heat. So I chopped them all and put them in the pot. Luckily, I tasted the chili before adding anymore varieties of chili, which is when I discovered that those chilis got pretty spicy when they were cooked. And by the time the elk was done simmering, I was VERY glad I hadn't adding any more heat to it. It was pretty spicy. Enough that some of the kids needed sour cream to tone it down.

A. loved it, though, and declared that I should make it this way from now on.

Poppy requested the chocolate cake, which Cubby was happy to make. We used (great-great) Grandma Bishop's recipe, which is particularly fun for kids to make because of the step where the buttermilk (we use yogurt) and baking soda are combined. FOAM! It's like those baking soda and vinegar volcanoes.

Anyway, the cake was delicious as always. The kids went to Rafael's ranch in the late afternoon with A. to get Rafael's chickens that he wanted us to take, so Cubby wasn't around to make any frosting. Instead I just dusted it with powdered sugar, which somehow makes it a bit more wholesome.

Or maybe that's just wishful thinking. It was good, though.

And speaking of Cubby! Check out this extremely old photo I found of Cubby when he was a bit younger than Poppy: 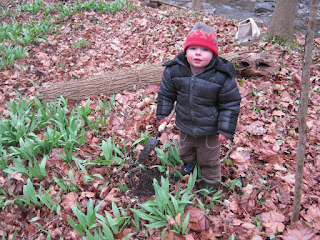 Digging ramps in New York. He was into food even then. (Also: Wookit da widdle FACE!)

Long version: I've read about chili mac before, which is made with macaroni, cheese, and chili. I had both leftover chili and leftover macaroni and cheese, so I decided to combine them. I thought it tasted pretty good, but the children did not approve of this combination. None of them finished their servings, so I made the cocoa, too, to fill things in a little.

Also because I wanted some cocoa myself. Kids are a convenient excuse for making cocoa. (Equal amounts cocoa powder and sugar, a pinch of salt, milk, and a bit of heavy cream.)

Long version: I took out some ground beef, which I mixed with the remainder of the elk chili, plus some extra green chili and tomatoes, to make taco meat. I did this early in the afternoon because I had a meeting at 4 p.m.

Good thing I made it earlier, because when I came in the door at 5:30 p.m., the children were past ready to eat. Meat in storebought corn tortillas with cheese, lettuce, and sour cream, and everyone's fed.

I did not give them a vegetable, other than the lettuce. They'll survive.

And with the consumption of this skillet meal, we are officially done with the elk.

It was a big moment. I announced it to the family at large. I feel it was a significant endeavor to cook my way through two hundred pounds of strongly flavored game meat over the course of almost a full year.

Cubby's next elk tag for his hunt in December is for an antler-less animal, which means if he gets one, it will almost certainly be milder in taste than a bull elk in full rut. Here's hoping.

Long version: This was some of the pork loin that Miss Amelia gave us. When I cut up the steaks a couple of weeks ago, I also chunked some of it up and froze it with a stir-fry marinade (soy sauce, vinegar, garlic powder, ginger powder). That was the meat in it, and then for the vegetables I had all the banana peppers I had harvested before the freezer that didn't quite freeze, plus a couple of not-quite red bell peppers I harvested for the same reason. Also carrots, onions, and a bag of frozen stir-fry vegetables that included broccoli, green beans, and mushrooms, but really seemed to mostly be chunks of broccoli stems.

In any case, it was good, and everyone was happy with it.

In the Wee Hours

Is there anything more tedious than listening to other people talk about how tired they are? Not really.

But I am, indeed, very tired this morning and I'm going to talk about it. Because the reasons are actually pretty funny.

The plan was to go to sleep early last night. The toddler, however, had other plans. At 8:30 p.m., she was still calling to me from her room to tell me this very important information: "Mommy! 'Rain' and 'Rainbow'! They rhyme!" It wasn't really the time to get into the difference between rhyming and compound words, so I just replied, "Well, no. But rain is the first word in rainbow. Now go to sleep."

So I didn't go to bed until around 9 p.m. Still okay, though, if I could just sleep uninterrupted until at least 5 a.m.

Ah, the optimistically wishful thinking of the tired mother.

At 3 a.m., the same toddler was calling to me from her bed so I could fix her covers.

At 3:45 a.m., that very same toddler was crying in her room. Presumably this was a nightmare because she didn't actually wake up, but did quiet down when I went into her room.

At 4:45 a.m., the five-year-old was demanding to know who put water in his bed. As if one of his brothers would rise from their sound sleep to splash water in his bed while he was sleeping.

Well, actually, I wouldn't put it past them, but this time they were innocent. Turns out, he was just sleeping very heavily with his mouth open and just woke himself up with his own drool.

But that was it for me. I gave up at that point and just got in the shower.

And so now, I am tired. But at least I have plenty of time to drink my coffee before we get on the school bus.

Plus, I used to get a lot less sleep. Like during this crazy time: 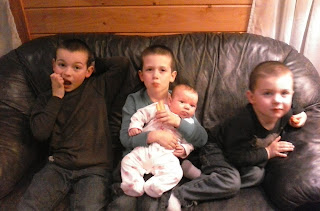 So cute. So exhausting.
Even though I'm tired today, at least I have a reasonable chance of sleeping tonight, which was definitely not the case in the previous decade of my life with newborns and toddlers. So, you know, silver linings.
Posted by Kristin @ Going Country at 5:03 AM 4 comments: