The End of an Era

Poppy has always had her own idea of when the appropriate time is to reach milestones.

She quit nursing on her own cold-turkey when she was 14 months old.

She decided she was ready to use the toilet at around two years old, and three months later, we were done with diapers entirely.

She insisted I remove her booster seat from her chair at the table about a month ago. Her chin is now about level with the table unless she kneels on her chair, but she was done with that booster and there was to be no discussion about it.

And now, the crib has been retired. 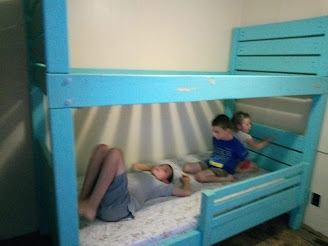 That was the bed my brother made for his daughters when they were sharing a room. When they decided they wanted their own rooms, they each got a single bed and he asked us if we had any use for a bunk bed. We didn't at the time, but I knew we would need a bed for Poppy eventually, so A. brought it back with him from his trip to Tucson for Thanksgiving last year.

Then it sat in the barn for several months. But today, we hauled it out, hosed it off, and set it up.

It was a little sad retiring the crib that has been in constant use since Cubby was born. That's more than a decade of putting babies in that old, hand-me-down crib with the cheesy lambs painted on the side that we got from my friend Alyssa.

But there's nothing but big kids in this house now, so out goes the crib and in goes the big bed.

Friday Food: Back to School

Long version: Oh look! A picture of quite unexciting food! 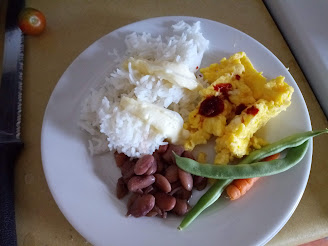 This is Jack's plate. The red stuff on his eggs is hot sauce, because he's a good New Mexican boy.

Long version: This was the first Delicata squash from the single plant that sprouted from the six seeds I planted. I put one piece on each of the children's plates, because they'd never had it before. None of the boys like squash, and they didn't like this, either. Poppy did, though.

Long version: Both the corn and the cookies were courtesy of Cubby. (That's some pleasingly inadvertent alliteration right there.)

He went with A. to get firewood last week some distance away, and they stopped at a store on the way home. Cubby spied the sweet corn in the produce section and asked A. to get some. So he did, and the children were very happy.

Cubby was also responsible for the cookies. He wandered into the kitchen at 3:30 p.m. and announced that he would take care of our Sunday dessert. He wanted to make cookies, which was not something I would have done in an 84-degree kitchen, but that was his choice. Unfortunately, we didn't have enough butter in the refrigerator and I had to get some out of the freezer. So the only cookie recipe he could make was the one from his cookbook that calls for melting the butter.

Those are the best chocolate chip cookies anyway, so it was fine. 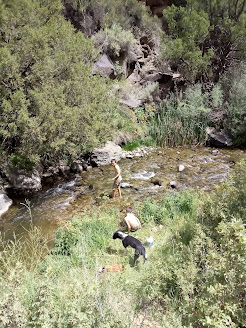 This one includes Odin the One-Eyed Guard Dog, who drove off something very large from the campsite overnight. A. didn't see whatever it was, but he heard it crashing as it fled from Odin, so he's guessing it was a bear. Elk aren't likely to visit a campsite, and those were the only two large animals in the area. Good dog, Odin.

Long version: This was our first day of school for the year. This year, given the new requirements for class size and so on, I'm acting as assistant for the Kindergarten/1st grade teacher and essentially working as a classroom teacher. I knew it would be exhausting the first day, and I would not be brimming with cooking energy by the time we all got home. That's why I cooked the brisket the night before in the oven and then just sliced it in the morning and stuck it back in the refrigerator.

When we got home, I heated the brisket with barbecue sauce, made rice, and nuked some peas.

Then I lay down in bed to rest "for a minute" and actually fell asleep for about half an hour at 6 p.m.

Good call on making that brisket ahead of time.

Long version: This chicken was a clearance package of lemon-pepper seasoned giant chicken legs. There were four of the legs, and there was no way all of them were fitting in the skillet I started browning them in. So then I had to transfer the browned chicken to a 400 degree oven. It was much too hot in the kitchen for that, and it took a lot longer to cook them than I anticipated.

It was 6 p.m. before we sat down to eat. We usually eat at 5 p.m. But at least there was tomato salad.

It's always exciting to have the first tomato salad of the season. I didn't have any asadero cheese for it, which I prefer, but just the tomatoes and basil with balsamic vinegar and olive oil was delicious.

Long version: Another work day for me, and also a rather hot day. My kingdom for a Wendy's.

Absent any options for food made by someone else, I went with my original plan. That is, I made some taco meat with the leftover shredded chicken by just putting the chicken in a skillet with a couple of tablespoons of salsa, and some chili powder and cumin. Charlie, Jack, and Poppy ate that in corn tortillas with cheese. They also had some green beans.

Cubby had some of the chicken on its own, plus the rest of the leftover mashed potatoes and some green beans.

A. had leftover brisket, leftover rice, and some leftover peas.

I had a salad with some of the leftover brisket in it. And I managed to stay awake until 8:30 p.m., so, you know, progress.

Long version: The sliders are those small hamburgers seasoned like meatballs. Poppy and I made the pesto in the morning while we were watering the gardens and harvesting things, which included the tomatoes.

A. took a photo of our harvest for you: 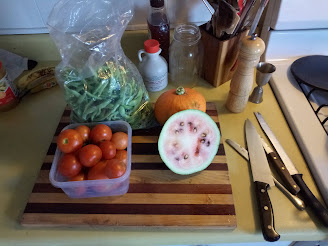 That round pink thing in the front is a watermelon that wasn't quite ripe. It was at least as good as your average seedless watermelon, but definitely not all the way ready. There are about five more still on the vines, however, so we have great hopes that this will be the year we grow our own delicious seeded watermelons.

A. wants everyone (where "everyone"= "my mom") to see that I am not lacking fresh vegetables. So there. You see. I have many, many vegetables.

We have discovered a new use for the decorative iron thing in our front entry: 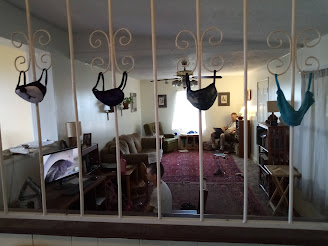 Mask central.
I bet I could show the kids that photo in twenty years, and they will know what year it was taken. Unless we're all still wearing masks whenever we leave the property in 2021, which I suppose is possible.
And in related news, Cubby has found a new use for the sewing skills taught to him by the MiL years ago: 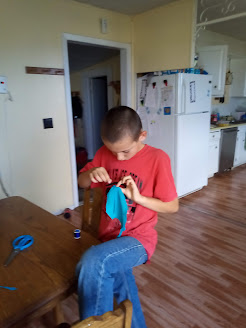 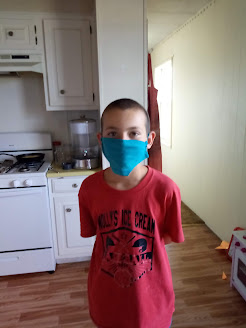 He was complaining that the masks I bought for the other kids didn't fit him (they don't--he has a big head) and that nothing fits him and everything is uncomfortable and "I'M GOING TO MAKE MY OWN."
And so, with an old t-shirt of Jack's and a needle, he did. It took him about thirty minutes. I helped him very minimally. I don't sew at all, except for the odd button that needs to be sewn on, so my help was limited to assisting him with the measuring of his face and the length of the ear loops.
We didn't actually look up any instructions, instead just winging it, but it turns out there are quite a few tutorials for t-shirt masks online. Of course.
I did tell him he needed to make sure to cut the shirt with the double layers, figuring that would make it more effective, and after the fact I found that I was more right than I knew.
Nice to find scientific confirmation.
Anyway. School starts for us today, so we need all the masks we have. And if we need more, I know who to ask.
Posted by Kristin @ Going Country at 5:15 AM 4 comments: