Long version: Did that say homemade pasta? Yes. Do I have a pasta machine? No. But I do have a rolling pin and a knife!

Or maybe not so surprising, given my difficulty with any machine I have ever encountered. I am not mechanically minded.

So I found making the pasta without the machine to be less challenging. Mentally, anyway.

It was Cubby who wanted to make it. He asked me totally out of the blue in the morning if we could make pasta. How could I say no? It's not like we didn't have the ingredients on hand. And since I already had some pesto made and wasn't planning on making anything else for dinner, I said okay.

We used this recipe, mostly because it didn't call for any separate egg yolks. I dislike separating eggs and having parts of eggs in the refrigerator. I did have to add an extra egg, though.

I actually found it easier to just roll the dough out with the rolling pin. I've never been good with machines, and I don't like washing and storing them, so a rolling pin seems more reasonable than a pasta machine to me.

We made the full recipe, which made four piles of pasta that looked like this: 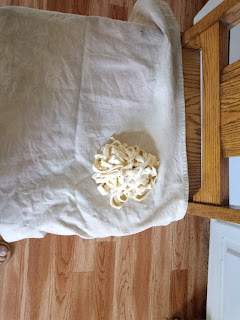 On a chair, because I ran out of counter space during this endeavor.

We cooked two and froze two, but Cubby said we should have cooked all of it. He really liked it. Of course.

Long version: When A. is in charge of grocery shopping, we end up with a lot of . . . interesting meat. This time he bought some pork neck bones, which I had never dealt with before. However, I know the best way to get meat off of bones like that is to simmer them for a long time until the meat is able to be pulled off the bones.

So that's what I did. It was a pain getting all the little bones separated from the meat, but the meat ended up being really good. I fried it in the lard that was rendered out of the meat.

As a bonus, I ended up with a couple of quarts of highly gelatinous pork stock, which I put in the freezer for soups. Sometime when it's soup weather, which is not now.

Long version: These were the big chicken leg quarters that I separated into thighs and drumsticks. I didn't have yogurt to marinate the chicken, so I just marinated it in salt and vinegar. I coated it in the same mixture of masa and spices and it came out fine.

Cubby took it upon himself to make cookies for our Sunday dessert. He actually asked me at 5 p.m. the day before if he could make them, but I told him he'd have to wait until the next day. He and Poppy made the cookies all by themselves, and they were perfect.

Long version: When I made bread on Sunday, I screwed up the division of the dough and two of the loaves of bread were quite small and kind of thin. So I cut them in half horizontally and used them to make cheese pizzas. 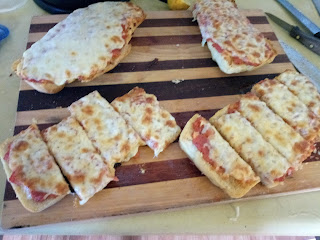 The children were pleased.

A. had the rest of the leftover goulash and rice, too.

Long version: When I was organizing the big chest freezer, I counted ten pounds of ground beef left from the cow we got over a year ago. I was very pleased about this, because there is absolutely no comparison between real ground beef and store ground beef.

We hadn't had hamburgers in awhile. All of the children had seconds.

Random old photo from when A. took the children to the mountains: 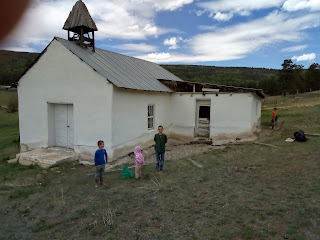 You can't go anywhere in New Mexico without finding an old church.

One of the other meats A. came home with was an entire brisket, which you may remember is very, very large. I cut it into several pieces before freezing them. This was one of the pieces.

Brisket cooks for so long in the oven, I decided to cook it overnight at 250 degrees. Then I pulled all the fat off, sliced it, returned it to the pot, and put it in the refrigerator to be re-heated with barbecue sauce at dinner time.

Cubby pulled his cookbook out with the intention of making something, and I suggested that perhaps he should try to make something other than various forms of starch. He decided to make "Creamy, Dreamy Tomato Soup," which doesn't actually have any cream in it. All it is is canned tomatoes, garlic, shallot (we used onion), chicken stock, a small amount of brown sugar, and white bread.

It's the bread that makes it creamy when it's all blended together. So, starch and tomatoes, then.

It was very easy to make, though, and good. Even Charlie, who doesn't like soup, liked it. I might even make a larger batch at some point in the fall and freeze it to have some soup on hand for when sickness inevitably strikes. It should freeze well because it doesn't have any dairy in it.

Long version: It's been awhile since we've had those thick country ribs. I cooked them for a few hours, covered, in the oven in the morning, then at dinnertime added spices and broiled them until they were crispy.

Just before dinner, I went outside and picked some green beans for the kids' vegetable. I just love doing that. I didn't even bother to cook them. The kids like them better raw, anyway.


Sure they are. And who couldn't use a little more fun in their lives?

I mean, how fun is this photo of the top of my old stove? 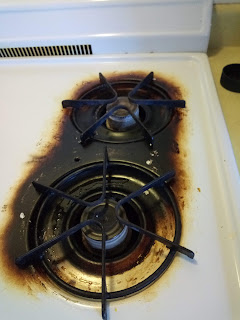 I do not miss this filthy black junk that got all over my kitchen. 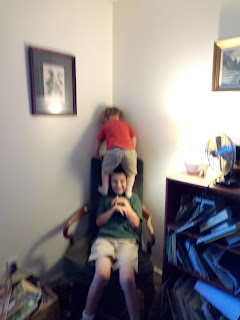 Just after this was taken, she started to actually stand on his head, and I cruelly had to end the game.

Cookies are definitely fun, especially when they're completely made by someone who is not me. That is, by Cubby and Poppy. 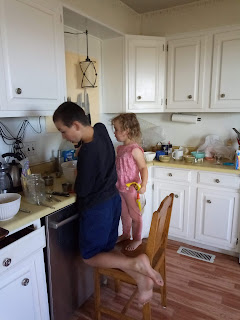 Poppy was in charge of the chocolate chips, and she took her job very seriously.

And then there was the homemade pasta Cubby requested we make. 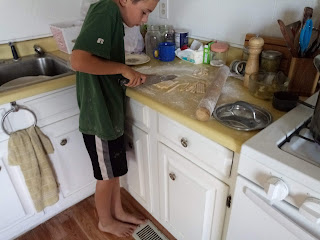 This child has definitely (and unfortunately) inherited my love of simple carbs.

There! Wasn't that fun? Back to our regular, boring lives now.