A Small (and Temporary) Triumph


On Wednesday I decided I'd better get photographic evidence of that rarest of sightings: The completely clean playroom. 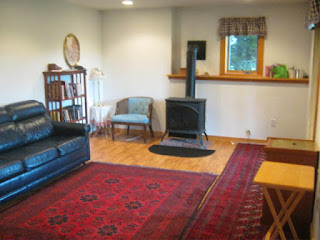 You'll probably see a Yeti before you see this again.

Okay, so it's not exactly a Pinterest-staged playroom. You don't see any whimsical alphabet wall hangings or carefully placed and aesthetically pleasing wooden toys. But you know what you also don't see? A confetti of cut paper on the floor, multiple "houses" and "bases" made out of cut and taped-together cardboard, block castles guarded by Storm Trooper action figures, and some straight-up trash. All those bits of tape and paper and random pieces of plastic wrap from when Cubby made a "video game" and . . . I don't even know. I just threw it away.

I did not, however, throw away the cardboard creations. Those  I stashed in the back of their closet so I can't be accused of throwing them away should they suddenly demand the fate of those artistic creations. And if they don't ask? Then I'll throw them away.

I got it all cleaned up and vacuumed and dusted and everything. 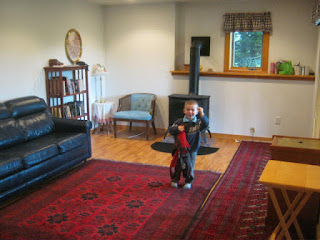 Pretty sure Jack's giving a fist pump for Mom here.

Twenty minutes later, Cubby and Charlie got home from school and immediately began to trash the joint again, with Jack's able assistance. 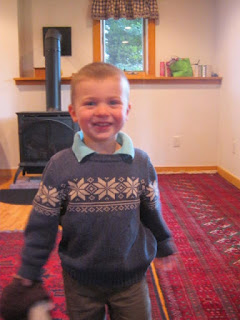 Oh well. At least they're cute.

Labels: all about me, domesticity, Jack, randomness

Earplugs Are the New Bad Pennies


A. has always had a problem keeping track of his earplugs. He uses earplugs a lot, for mowing, chainsaw work, log splitting, and all the other tasks he does that require extremely loud machines.

Earplugs are pretty small and easy to lose, but the main issue was that he never put them away when he was done with them. Instead he would stick them in his pocket, where they would stay until I washed his clothes. Then I would find them in the washing machine* and throw them in a bowl on top of the dryer.

So if he needed earplugs, he would generally look there. But they weren't always there, and then there would be wailing and gnashing of teeth and demands for help locating the earplugs.

Then one day he went to Home Depot and came home with a package of 80 bright-orange earplugs. Problem solved!

The new problem this has created is that the children are extremely enthused about large quantities of small items. They pilfered at least a few dozen of the earplugs before I stashed them high up where the little monkeys couldn't get to them. And those few dozen turn up EVERYWHERE.

They've been tied to lengths of string, jammed into holes in boxes, taped to various action figures, stuffed into the cockpits of Star Wars ships, and generally scattered hither and yon until I can't go anywhere without seeing a spot of bright-orange and finding an earplug.

This morning when I was picking up the playroom in preparation for vacuuming, I found no less than eight. When I went out to put them in their hiding place in the barn, I found two more in the grass and one in an empty water bottle. There is one sitting just under the edge of the couch right now, mocking me.

I'm maybe beginning to get a little paranoid that the earplugs can move at will and are stalking me.

Eventually I will find them all and hide them away where the small monkey-children can't find them.

* I don't usually check his pockets before I do laundry, mostly because he's a grown man and I feel I shouldn't have to, but also because his pockets are FILTHY and I am loathe to stick my hands in them. This does occasionally result in me washing things like his wallet and one time, his cell phone. Amazingly, the cell phone was still functional after that, and everything in the wallet dried out just fine.

Labels: all about me, brothers, confessions, randomness, the A team


Before you run off to start your fun Memorial Day plans (mine include fishing en famille--whee), please read this and take your moment.

Onward.
Posted by Kristin @ Going Country at 4:40 AM No comments:


Yesterday afternoon, after we had returned from a necessary but somewhat boring trip to the small city to drop off A.'s rental car, get some tomato plants*, and buy a lug nut to replace the one that fell off of the Subaru, I suggested to A. that perhaps we should move the kids' tent outside and let them "camp out" on the lawn that night.

A. has been wanting to take them camping, but he knew it would just be a miserable experience because of the bugs. I thought maybe the bugs around the house would be tolerable at least, though I wasn't sure Cubby would be very enthused about faux-camping in the backyard.

Cubby once memorably remarked upon arrival at a state campground in Arizona, "Are you kidding? We're going to camp in this parking lot?"

But then A. said if he set up the big tent on the lawn and told Cubby they were going to camp out there to get Jack used to the idea of sleeping in a tent, it would probably be okay.

I also added that perhaps we could cook hot dogs in the firepit A. made in the brushy area behind the house. Because every campout needs a fire.

So that's what we did.

A. decided to take his bike to the general store four miles away to get the hot dogs. I asked him to get hot dogs, buns, and chips. He came back with hot dogs, buns . . . and beer.

I couldn't very well send him back to ride another eight miles for chips, even though I was bummed about the no-chips thing. What's a cookout without fun snacks? And fun snacks are in short supply at our house. This was the best I could come up with. 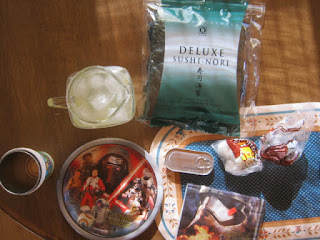 At least I managed to scrounge up enough lemons for lemonade and the last of some marshmallows. Add in some pickled carrots, radishes from the garden, and Star Wars plates sent by my mom for Cubby's birthday that I forgot to use in February, and you have one festive cookout.

A. got the fire going and cooked some hot dogs. 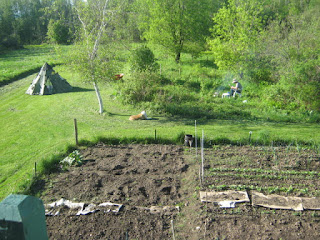 Just steps away from the garden and a freshly-picked arugula garnish.

Charlie was displeased because the only hot dogs at the general store were the red hot dogs, which are a local variety that are bright red with some kind of scary dye and which Charlie declared unfit for consumption the one time we tried them. Frankly, I agree. So he had ham and cheese in his bun, and I ate a salad.

Then they made some really gross-looking "sandwiches" with roasted marshmallows and more hot dog buns, because we didn't even have the right ingredients for S'mores. And then they finished up some coconut-flour cookies I had made the day before. (These are really good, even though the name of the blog makes me cringe.)

This was obviously the weirdest campout food ever.

They spent the next couple of hours racing around like maniacs, pretending to be raptors. 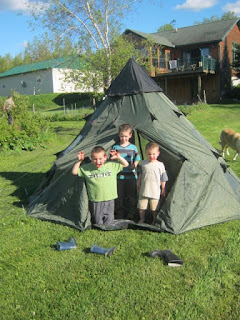 At 8:30 p.m., A. announced that Jack was so tired he was seeing elephants, so they all got ready for bed and got into the tent. I listened to the ensuing tent insanity from the comfort of the house. The last of the shrieking died down by 9:30 p.m.

At 3:30 a.m., A. came in with Jack, both of them cold from inadequate covers. A. put Jack right into his sleep sack and into his bed and we heard no more from him. Then A. got into bed in the house.

At 4:30 a.m., Cubby came in demanding to know why Daddy wasn't in the tent anymore. Then he said he was cold and got into his bed.

This only proves to me that everyone really prefers his own bed over a sleeping bag in a tent, and I still do not understand why anyone would ever voluntarily sleep in a tent.

But Charlie is still out there. I went out to check on him and found him sound asleep in the tent, with good old dog Mia zonked out in guard-dog position right in front of the tent's entrance.

I expect they'll all be awake shortly, requiring hot baths and a large breakfast and already ready to do it all again.

* Six Juliet plants and six Mortgage Lifters are now in the ground. Hooray for The Tomato Crazy: Northwoods Version!