There are some things that I have given up on after having a third kid. Any hope of going anywhere without at least one child in attendance, for one thing. Normal haircuts, for another. Although that last one has taken a turn for the rather alarming.

When Cubby was young, I would bring him to an actual salon (albeit a Country Salon with a deer head on the wall) to get his hair cut whenever A. went. This was feasible because I only had one kid and the Country Salon only charged five bucks to cut Cubby's hair.

Then I had another kid. And then this kid started to have a lot of hair. Getting two kids to any kind of salon became kind of a hassle, as well as kind of expensive, so I would mostly cut their hair myself, despite having no experience or skill whatsoever. Every four months or so I would bring them both to a professional to fix my mistakes.

It was at this point that A. started suggesting that he could just give them buzzcuts with his beard trimmer. I adamantly refused this suggestion, because I don't really like the way buzzcuts on little boys look. 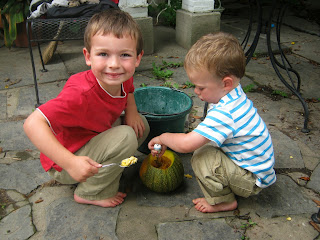 I mean, look at the cuteness of those little heads of hair. JUST LOOK.


Then I had a third kid. He doesn't yet have enough hair to worry about really, but getting three kids to a salon for a haircut with any kid of regularity was just . . . no.

I have some problems, though. One of them is that I am really not good at cutting their hair. Another is their hair is very thick and grows very fast, especially Cubby's, so they need a haircut every four weeks without fail. And the third problem is that I do not like long hair on males of any age. So if I wasn't willing to cut it myself, pay for someone else to cut it, or let their hair grow . . .

I surrendered to the beard trimmer. And A. has been shaving their heads regularly ever since.

But then his beard trimmer died, probably because it wasn't really meant for shaving whole heads of hair with any regularity, so A. bought actual electric hair clippers. He used them for the first time last night, putting on the number zero guard* first and starting with Cubby. He took the first swipe right above Cubby's ear and said, "Oops."

The number zero guard is pretty much the "bald" guard. Super.

Because he didn't actually want Cubby to be completely bald, he then did the rest of the bottom part of Cubby's head with that guard, using a longer guard for the top and then attempting to sort of fade the two together with an intermediate-length guard.

And then, so Cubby wouldn't be too upset about his, um, extreme haircut, he did Charlie's hair the same way. 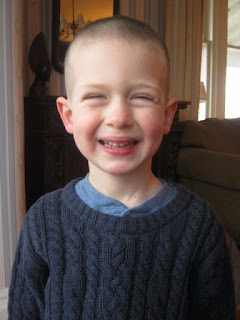 This is Charlie's response to a request for a smile. Yikes. 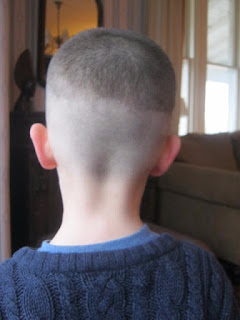 DROP AND GIVE ME TWENTY, PLEBE.

I trimmed Jack's hair for him a few days ago, but he has so far escaped the clippers. 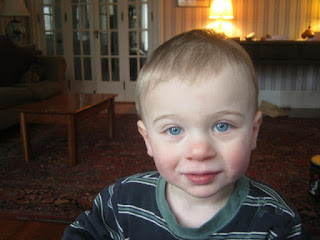 Looks like a damn hippie next to his brothers now, though.

At least we won't have to worry about cutting it again for awhile. I guess.

* The guards are the interchangeable heads for the clippers that determine how short the resulting haircut is. They start at zero for the shortest (i.e., BALD) and go up from there.

Because It's Been Too Dull


I was just thinking I could use a little more excitement in my life. Good thing A. saw a bat flying around in the Pit of Despair last night! That should make my required multiple trips in and out of the cellar today to do laundry and get more jars for maple syrup much more entertaining.

Will it stay safely immobile in its daytime hiding place? Or will the dark of the Pit of Despair inspire it to swoop around during the day, while I'm trying to get jars? OR, will it be inside one of the jars, which has happened before? OrOR inside the washing machine, which has also happened before?

Who can tell! So much to look forward to!

Labels: all about me, Blackrock, the A team, wildlife


The same friend from whom we received our last asshole rooster for eating informed me last week that their remaining rooster had started threatening her kids with his spurs, so we were welcome to take him if we wanted him.

We were at their house the next day with a dog crate in the back of the minivan. We are nothing if not prompt.*

The timing ended up being extremely fortuitous, because A. butchered the rooster yesterday so I could cook it today, and this morning I woke up with the nasty cold that had felled Cubby and A. last week. I did the stock-making this morning, straining and pulling the meat off the bones around lunchtime. Then I did all the chopping and sauteeing and all for soup.

So by the time I could no longer breathe through my nose and wanted to do nothing more than slump in a chair in the living room while the children rampaged, the Asshole Rooster Soup was done.

I can't really convey to you how vastly superior a homemade soup made from a home-raised chicken tastes as compared to one made from a grocery-store chicken. It just tastes . . . clean. 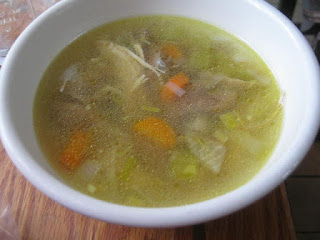 You can just see the healthfulness radiating from this bowl, can't you?

And guess who else is also sadly sick but happily loves soup? 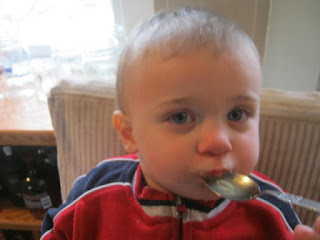 Eat up, snotty baby. That rooster will cure what ails you.

Charlie is also sick, though he does not love soup. Luckily, I prefer soup really thick, so I can scoop out the solids into a bowl for him. He may not love soup, but he does enjoy chicken and rice.

I'm sure we'll all wake up completely cured in the morning. But if we don't, there's more rooster soup.

* Incidentally, I asked my friend if she tells her kids that we take the roosters or if she just lets them believe a fox or something gets them. She told me she had first said something about a predator to her daughter--a classmate of Cubby's--but her daughter was worried they might find the rooster's dead body. So then my friend mentioned our name to her daughter, and that seemed to be more acceptable to her. I found this hilarious. We may be woodchucks who collect unwanted roosters for eating, but hey, at least we're better than a fox!
Posted by Kristin @ Going Country at 4:27 PM 6 comments: