Countdown to the Cage Fight

Several months ago, my parents--at my suggestion--gave Cubby one of those spiffy light-up clocks that you can set to change color at a certain time in the morning. The idea is that kids who can't tell time yet will just check the light to see if it's time to get up. Ideally, this eliminates the child wandering around at four in the morning, because he's awake and thinks it's time to get up.

It is never time to get up at four in the morning. The clock tells them this.

We stopped using it for awhile because Cubby was sleeping in so late (7 a.m.! practically a college kid!) and then Charlie was in there with him and we were just trying to get Charlie used to sleeping in the room. But a couple of weeks ago, we decided to start using the clock again, in an attempt to keep Charlie from bouncing out of bed at 5:15 a.m. and waking up his brother.

It worked. Charlie stays in his bed until the clock turns yellow. The clock is set for 6 a.m. This means that at 5:58 a.m., I start the countdown to detonation.

Detonation of peace, that is. Because at 6 a.m., I hear the door to their room being flung open, pounding feet in the hallway, the crash of our bedroom door as they burst through it, and then Charlie's little voice proclaiming, "The clock is yellow. I want to go downstairs."

And then, because A. is the only parent currently sleeping in our room (I'm temporarily located in the small adjoining room with the baby), I hear him mumble dazedly, "Okay, go downstairs. I'll be right there."

It's a very nice way to ease into the morning, as you might imagine. And then, when we do get downstairs, we usually find them both sitting on the heating vent in the living room, fighting over the precious warm air coming from the furnace. Then they demand breakfast.

And so begins another day of the "enjoy it, it goes so fast" stage of parenting.
Posted by Kristin @ Going Country at 5:30 AM 5 comments:

Labels: Charlie, Cubby, the A team

Apparently, almost-five is the age at which I can start getting some use out of these freeloading children of mine. 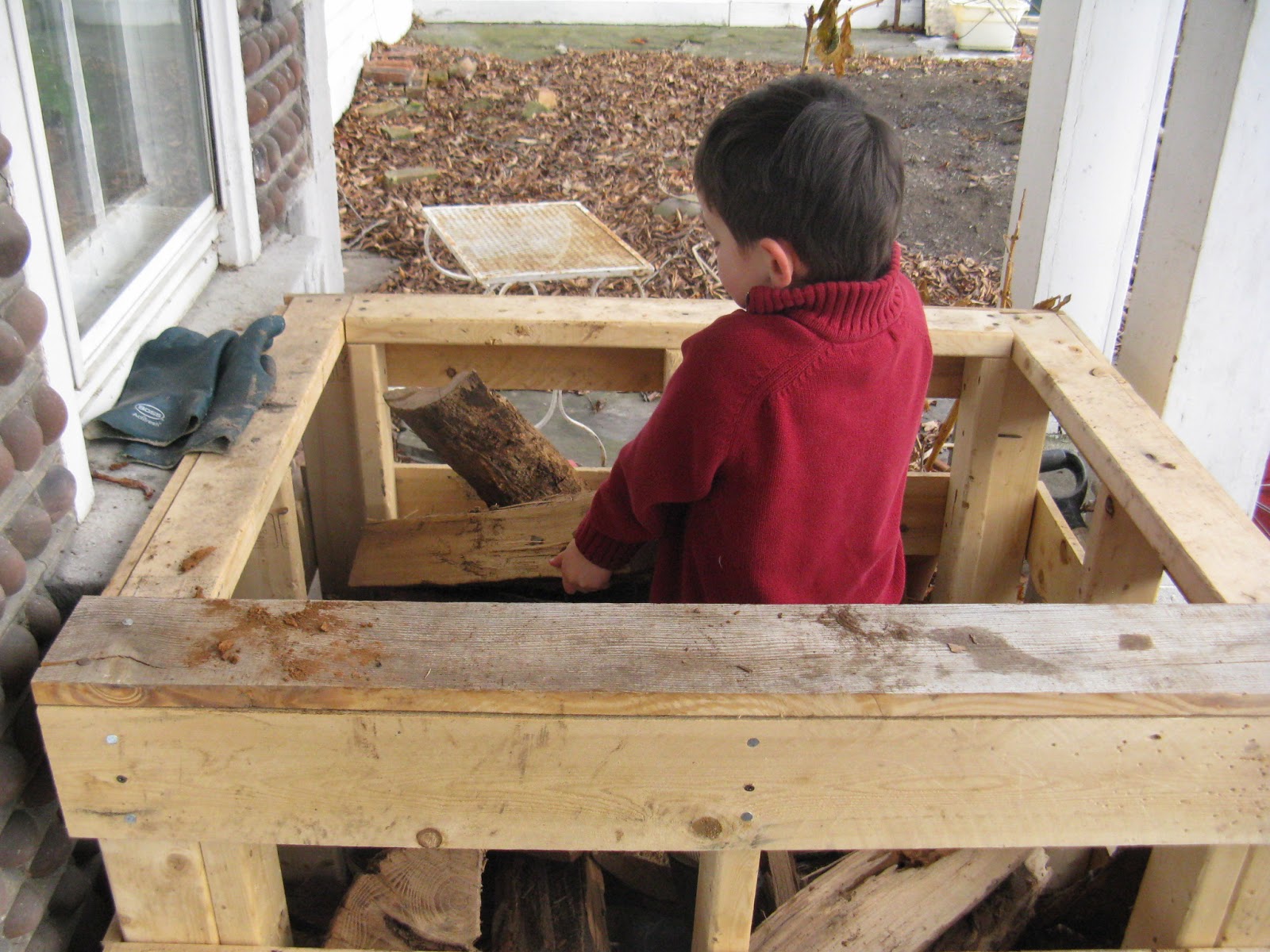 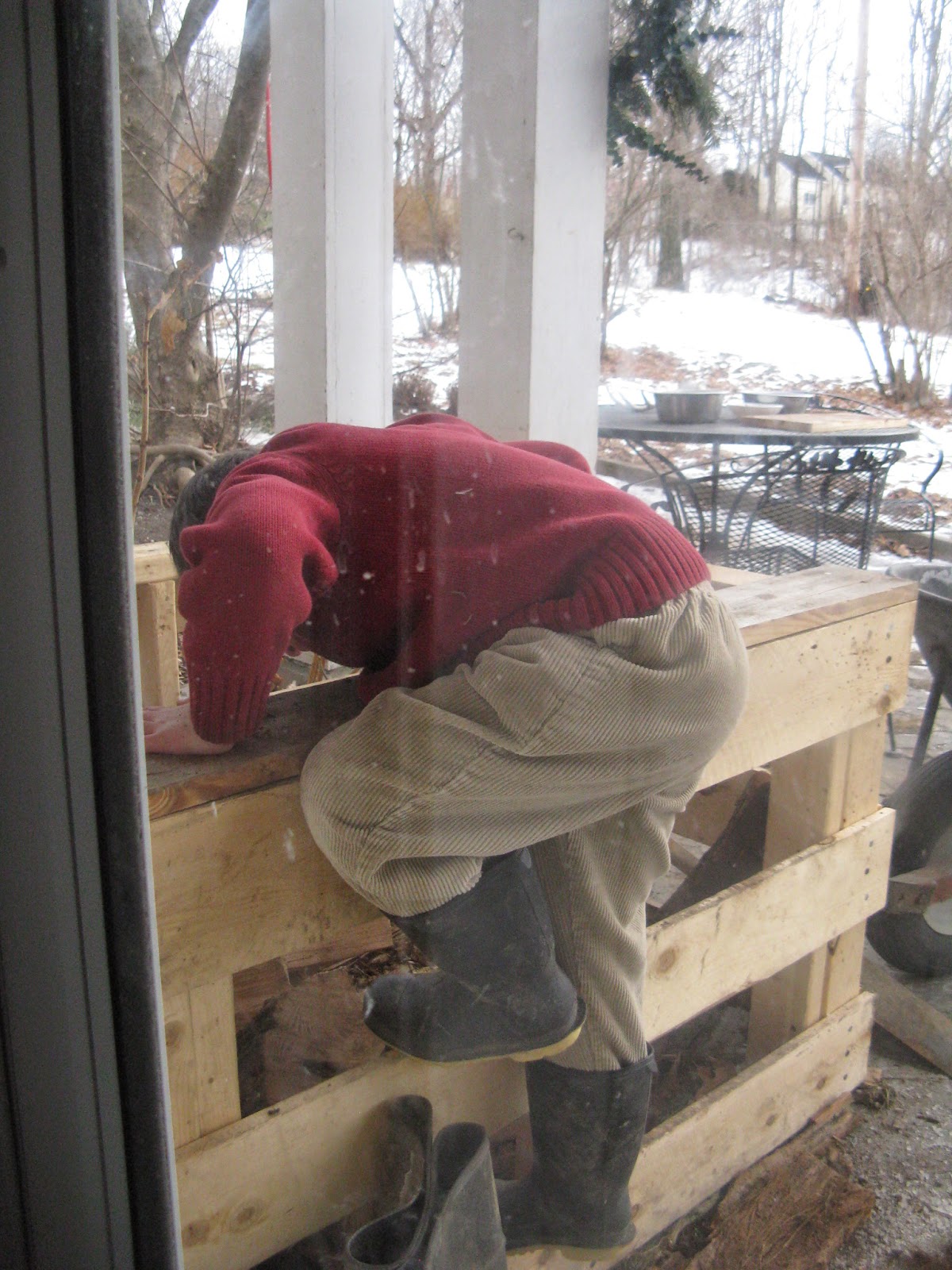 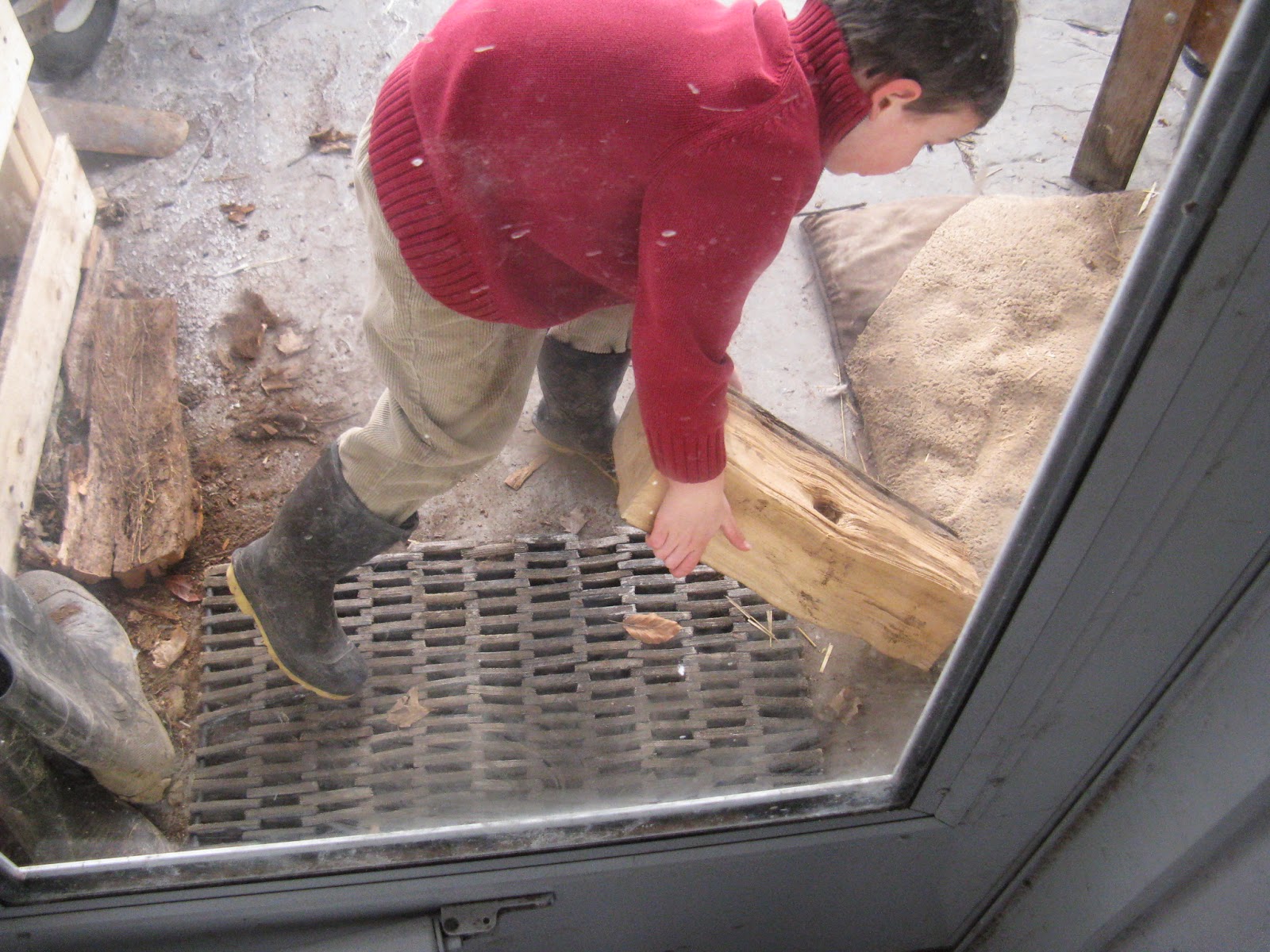 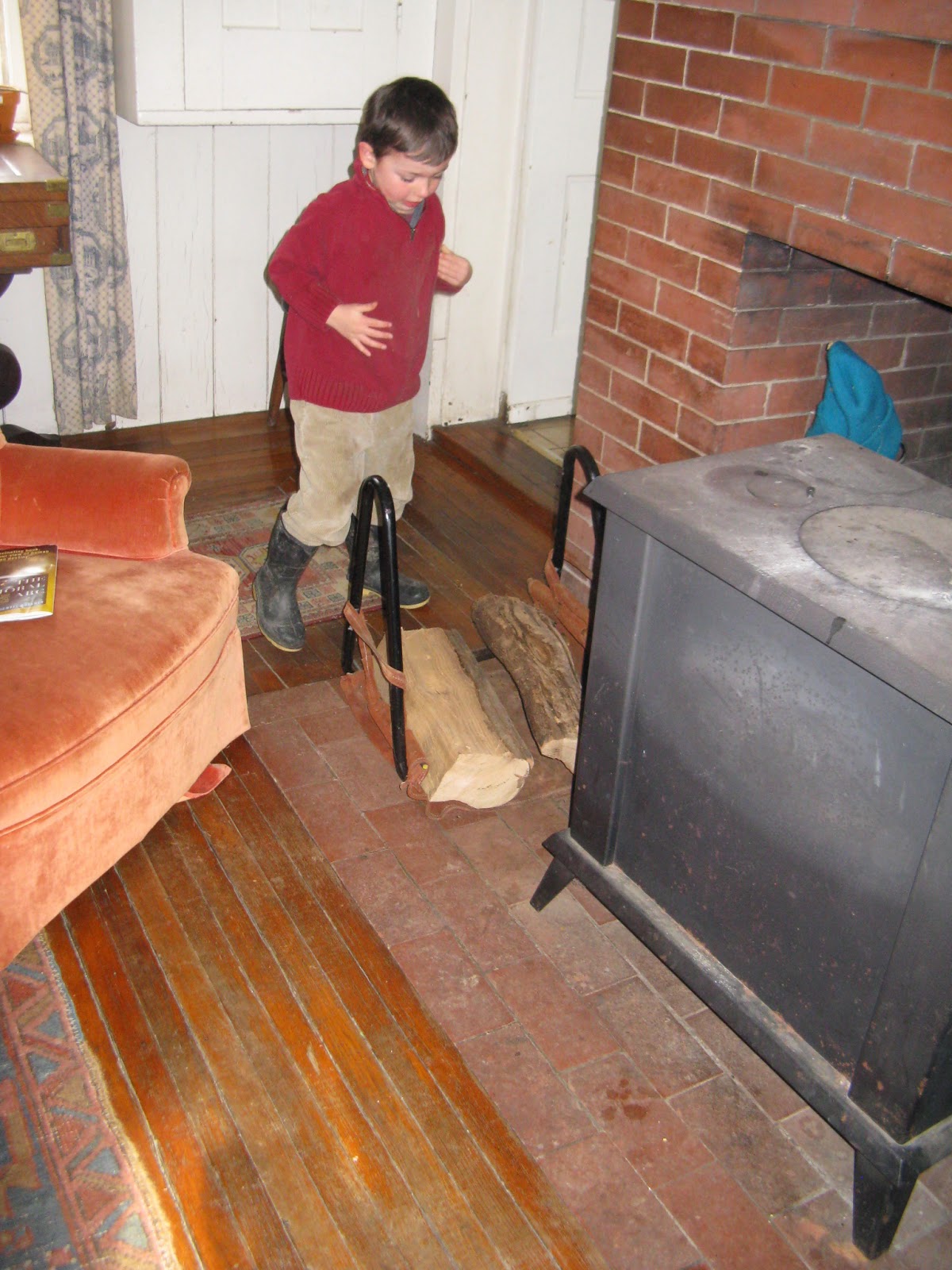 Any kid that will fill the wood carrier inside for me is a keeper.

When Cubby first announced that he would take care of bringing the wood in, A. was all, "Yeah, sure, you go ahead and do that," all the while expecting to go outside and get the wood when Cubby inevitably came inside complaining of how heavy the wood is and how high the side of the outside woodbox is, and how he couldn't do it.

Instead, Cubby went out, scaled the side of the woodbox, tossed out a piece of wood, picked it up, opened the door, carried it inside, and dropped it into the wood carrier next to the stove. Then he did it again and again, until there was enough wood inside.

Well then. I guess we underestimated the boy.

Maybe I can teach him to do all the vacuuming next . . .

This morning at 1:30, as I was sitting up in bed feeding the beast, I started thinking about some things that I really love. I am not talking here about the obvious and serious things, like my family. No, I'm talking more along the lines of "these are a few of my favorite things" kind of things. Small things that make me happy. Which I will now present to you in a very original list form:

-The sunset over the lake in the winter

-The sight of my clean refrigerator whenever I open the door*

-Quiet rooms with no electronic noise

Small things, without doubt, but they add up to happiness.

And now for your turn, my lovelies! What are the little but not inconsequential things that you love?

* About a week ago, I decided a thorough, pull-apart-the-shelves scrubbing was in order. So I did it at 7 a.m. on a Saturday morning with all three children taking turns crying and demanding attention during the hour it took me. Totally worth it.
Posted by Kristin @ Going Country at 5:55 AM 5 comments: