Years of disgusting, smelly, bacteria-laden dishcloths. Years. Every summer morning, I'd pick up the dishcloth to wipe down the counter or whatever, only to take a precautionary sniff to find it once again never really dried from the night before's dishes and therefore smelled like . . . I don't know. Like a moldering dishcloth.

I knew this could be avoided by scalding the dishcloth with boiling water after finishing with it at night, but who wants to boil a kettle of water to scald the thing when it's 90 degrees in the kitchen? Not me.

And then I was flipping through some annoying book all about how YOU TOO CAN KEEP AN IMMACULATE HOUSE WITH JUST TEN MINUTES A DAY! (it was one of those books that sounded much too excited and way too irritating) that the MiL got at the library when I found it: Nuke the dishcloth in the microwave on high for a minute to scald it.

So simple, yet so life-changing.

So if you, too, have been plagued by foul-smelling dishcloths, this one is for you. Pass it on. We can change more lives today.

Labels: all about me, country wisdom, domesticity

The Truth About Parenting

Thanks to that over-achieving butternut squash plant, I decided to make butternut squash soup for dinner tonight. I made this recipe. It was a masterpiece of local sourcing: Butternut squash, onions, garlic, carrots, celery, and sage from the garden. Chicken broth from our chickens. Cream from the local dairy. Nothing but the best for this soup. It was good, if a little thinner than I prefer my soup to be.

It was not, however, particularly kid-friendly.

Charlie took about three swallows from his mug before deciding a better use for the soup would be to form a lake on his tray. Cubby was persuaded to drink about half of his mug, mostly because I kept up a running commentary about how fun it was to drink our dinner instead of eat it. Ha ha! Isn't that funny!

I anticipated this reaction, though, which is why I also made an apple and pear crisp for dessert, to fill things out a little.

And that, my lovelies, is the reality of parenting: Sometimes kids eat dessert for dinner. And any parent who claims otherwise is probably lying. Truth.
Posted by Kristin @ Going Country at 5:50 PM 3 comments:

Against my better judgment, I planted some cucumber plants next to the fence in the garden. I really dislike doing this because the grass inevitably creeps back in and I lose whatever is planted by the fence in a tangle of weeds and grass.

This is especially problematic with cucumbers, because you know what happens when you don't see a cucumber for awhile? Yeah, one day you finally excavate under the weeds, only to find . . . THE CUCUMBER THAT ATE THE GARDEN.

But you know who's not scared of cucumbers bigger than his arm? 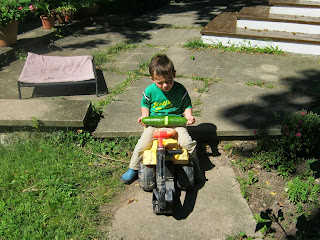 He gnawed it like an ear of corn until he got tired of it and tossed it to the ground. And then Mia found it and chewed on it as if it were a bone until it was gone.

Nothing goes to waste around here, at least.
Posted by Kristin @ Going Country at 10:05 AM 1 comment: