I don't stop making food when I leave home--penalty of having a big family that inconsiderately just keeps on eating even when we're not home--but I definitely make different kinds of food. As you will see. You will also see that our normal "dessert only on Sundays" tradition goes completely out the window when we're at Blackrock. It's strawberry season. I have no regrets.

Long version: Do you know how excited I was to come to New York and finally get real Italian sausage? So excited that when the MiL asked me for a list of things she could stock up on before we came, I put Italian sausage in all caps with "HOORAY!" after it.

It was just as good as I remembered.

I made the garlic toasts with some bread the MiL had made that didn't rise very well. Sliced thin, covered in olive oil and garlic powder, and broiled, they were good. Would have been better if Poppy hadn't started wailing and demanding to be picked up at a crucial moment, thereby rendering some of the pieces more charred than toasted, but they were still edible.

The cider cake is a sweet bread-y thing--kind of like pound cake, but not as rich--with candied fruit in it that the MiL makes. I don't know if it's the cider in it or what, but it magically lasts for literally months with no refrigeration. It's a very old recipe she got many years ago, and all the children except for Charlie love it. He objects to the candied fruit, I think.

Long version: I had some ham I had purchased for our trip to make sandwiches at lunch that needed to be used up. It was pretty cheap ham, more thickly cut than I like for sandwiches and definitely wet, as all store ham is, but it was all that was available at the tiny grocery store near our house. Luckily, even store ham can be made delicious by frying in butter. This dries it out and also makes for a nice brown crust from the butter.

The MiL is just harvesting her scapes now--from garlic A. planted a couple of years ago--so we got to extend our scape season. I am pleased by this.

I got to put both fancy butter and very fancy French sea salt on the potatoes, because the MiL has such things. Fun.

Long version: I didn't even bring plates down to the beach for this meal. What's a hot dog bun for if not to be a plate substitute?

Long version: I had not planned on a beach-friendly (read: easily transportable) dinner, but the weather was good and I knew it would be not good starting Tuesday, so we decided to take advantage and stay down on the beach after the kids' afternoon swim.

I collected leftover pulled pork and coleslaw, bread, salami, cheese, and bread and butter pickles. The children had sandwiches and coleslaw, A. ate the pork, and the MiL and I just sort of grazed. We had the fruit and cream after we got back up to the house and man, it's so nice to be back here right at strawberry time. Few things are better than strawberries and real cream. Not even whipped, either. Just heavy cream poured right over the sweetened fruit. Yuuuuuum.

Unrelated photo of the cabbage and beets I harvested from our garden before we left home: 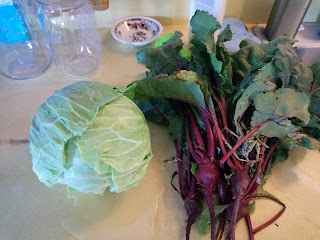 Fingers crossed the whole time we're gone that everything in the garden isn't dead when we get home.

Long version: Another day, another beach cook-out. I had been in the city this day and almost got some fish at the grocery store as a treat for Cubby, but the shrimp that were on sale were sold out and everything else was hideously expensive, so I didn't. Then I got home and A. decided it was a good day to take the boys fishing.

We all went down to our beach. A. and the boys fished from the neighbor's small dock and it looked like a fishing show. They just kept yanking fish out of the water. Mostly average-sized perch, but there was one bass so enormous--the MiL estimated about three pounds--that A. had to walk it along the edge of the dock until he got to the shore so he could catch it with his hands, because it would have broken the line.

So we had fish after all, and they were free.

I should have a photo, but I don't.

Fish caught on one's own beach--more or less--should also be cooked on one's own beach. I formed and brought down some hamburgers to cook with the fish, along with some potatoes I cooked in the microwave, then sliced and put in foil with butter to heat up on the fire. A.'s sister arrived this day and she brought more hamburgers and some sausage, so we ended up with quite a feast.

The pie was one that Cubby made with the MiL. He had expressed to me a few weeks ago that he wished to learn how to make pie. I told him I was delegating that one to The Pie Master--i.e. Grandma. I don't think he's ready to make a pie on his own quite yet, but it's a start. And it was delicious pie.

Long version: The MiL planned to take the boys to a baseball game this evening, and requested that they be fed before they went so they wouldn't want too many treats. I had planned on making various items of real food, but then the boys ended up eating half of the watermelon A.'s sister was cutting up right before dinner and some of the leftover sausage and hamburgers A. was eating, so that and the ice cream the MiL got them later was their dinner.

Unrelated photo of Little Sister and the Big Brothers: 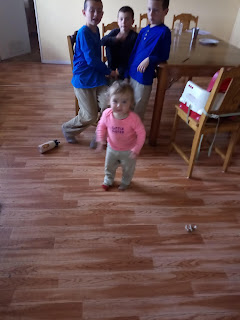 Not sure what's happening here or why I took this, but there they all are.

Short version: Patriotic potluck with a side of CRAZY FIREWORKS

Long version: The MiL's sister decided at the last minute to have a Fourth of July gathering, which featured a LOT of delicious food brought by all the attendees--I mostly chose to eat various kinds of pasta and potato salad, although there were also many kinds of barbecued meats to choose from--and the most impressive display of fireworks ever seen at a private residence.

A.'s cousin's husband is a sound and light engineer who has a great love of fireworks, and it was he who set it all up. It took him literally seven hours. There were spreadsheets involved and the fireworks themselves lasted at least half an hour. It was insane and awesome. They boys were beside themselves with excitement. Poppy was initially excited, but then she realized it was like three hours past her bedtime and time to turn into a pumpkin.

Okay, your turn! What'd you eat this week?
Posted by Kristin @ Going Country at 5:04 AM 4 comments:

An Update with Fake Photos


Due to a stupid technical thing that I won't even go into, the photos on my phone are not on my computer at the moment. I thought about just painting some word pictures for you, but decided that some old pictures that I awkwardly relate to our current activities would be better. Sounds fun, right?

The drive was not too bad, in that there were no unnecessary delays or really bad weather or illness or anything else that can so easily turn a not-so-bad trip into a REALLY BAD TRIP. I didn't even have to break out the ancient Game Boy.

Poppy even slept really well in the tent with me the two nights we were camping: 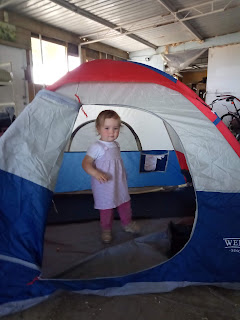 She wore her zip-up footie pajamas when she was actually sleeping in the real tent, and thus was the only one of us to not get extraordinarily itchy bug bites all under her clothes when we were camping in Missouri. Footie p.j.'s should be required gear for summer camping in the south.

We arrived just in time for garlic scape/strawberry/mulberry season (they always get ripe at the same time), so there's been a lot of berry eating going on. 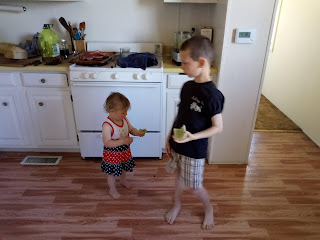 Just like this, only with a lot more red stains.

It's been a remarkably wet spring and summer here at Blackrock, but we've had mostly good weather since we got here. This means lots of beach time. 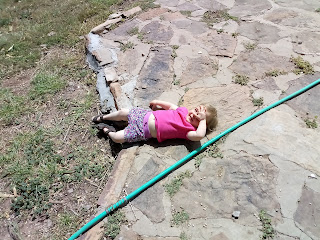 No matter how sunny it is here, however, the light never has this white glare that we get in New Mexico.

Unfortunately, I am finding it much more difficult this year to take children to the beach, because now Poppy is very much a walking, active child who wants to be right out in the water, preferably right out where her brothers are. This is a big change from last year when she couldn't even crawl and was thus always safely stationary on the beach.

So I have to spend the whole time we're down there in the water holding her hand to keep her from going in over her head. Jack still can't swim, Charlie is not a strong swimmer, and I genuinely worry about what would happen if one of them needed my help while I was holding on to Poppy. I would have to just throw her up on the beach and hope for the best, which is . . . no, thanks.

For this reason, I told A. that I need a second adult with me when we go to the beach. So beach time is family time now.

That's okay with me, though, and it does mean that with everyone down there, there's no reason not to have a beach picnic for dinner every night. The children approve.

I made a conscience effort to do this because I saw that our forecast is calling for much more rain this week. In fact, it's raining now.

I'm going to the Not Quite As Small City today for my big thrift store excursion*, so I won't be here to entertain the children. I'm sure A. will have no trouble, and at least with the rain, he has a good excuse to not go down to the beach.

* "So, Kristin, what did you do on your vacation?" "I went to a thrift store to buy soap dishes and a coffee mug." Just like Club Med.