This morning Cubby got all inspired by an episode of Bob the Builder and decided to make his own wind chimes. He needed to find "metal things that will clank together."

No problem. We have a large supply of cheap-ass beer cans . . . 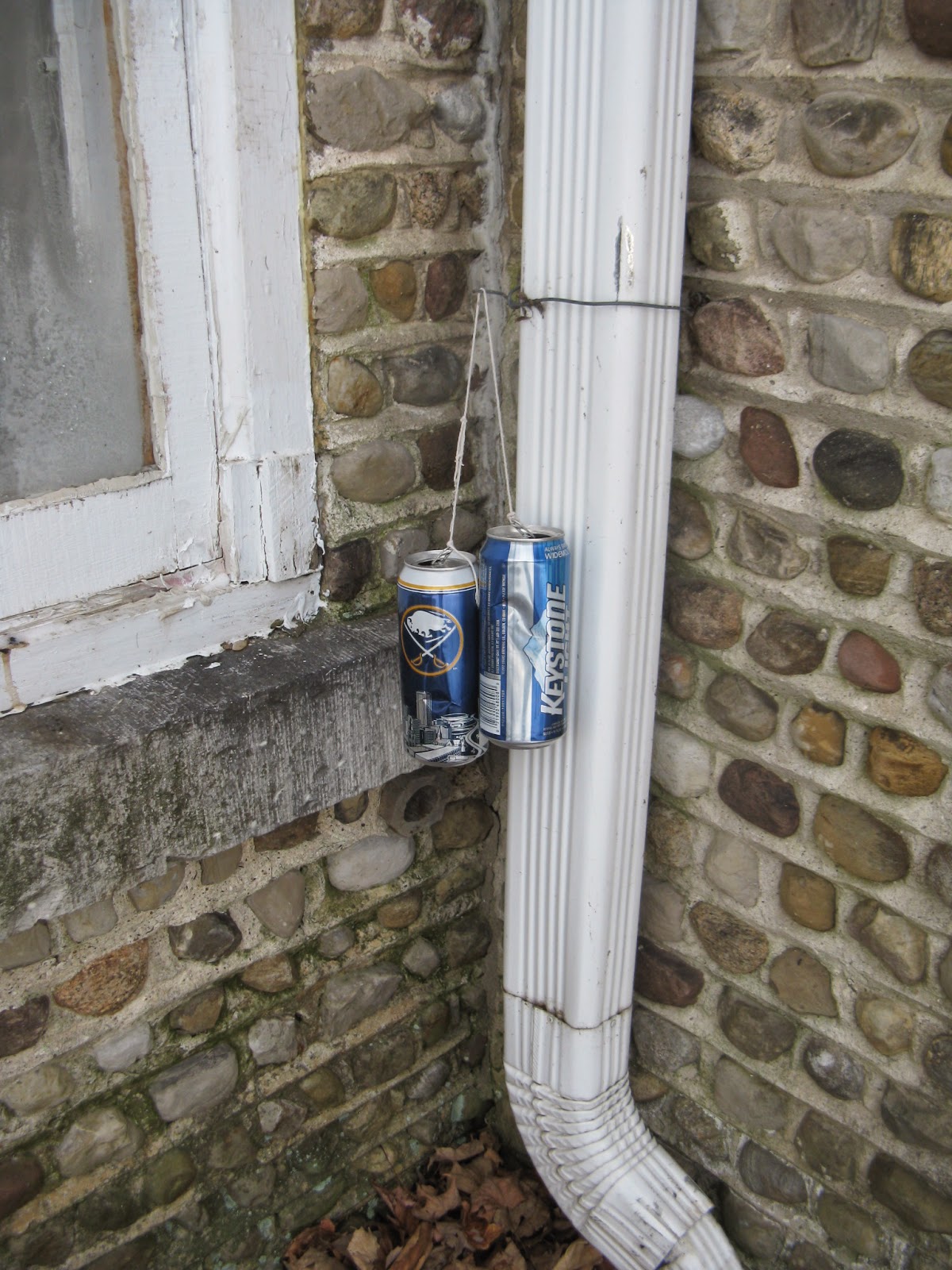 This is so trashy, I can't even believe it.

I came in the kitchen to find Cubby concentrating mightily on tying these beer cans together with kitchen twine. A. was sitting at the table with him, eating breakfast.

"I didn't want to stifle his creativity," he said with a straight face.

The finished masterpiece was placed outside by me in a carefully chosen spot. Carefully chosen to be out of sight of any visitors to our house and also in a spot where the wind is unlikely to blow them around very often, because I can't stand wind chimes. Why anyone would deliberately create more noise when the dreaded wind is blowing is beyond me.

Thanks for nothing, Bob.
Posted by Kristin @ Going Country at 1:09 PM 2 comments:

A. was reading the weather forecast for the next week aloud this morning and all I heard was, "Misery ahead."

Not that he said that. What he said was something along the lines of multiple single-digit nights, teens for high temperatures, with wind and snow here and there. I translate this to mean that the older children will need to be completely bundled to go outside at all, where they will probably stay for less than an hour (even less in Charlie's case, because he's not as impervious to the cold as Cubby is) before reappearing at the door to be undressed and demand hot cocoa.

Cubby will be thrilled, however, as his latest fascination is with Neanderthals and Cro-Magnon man and their Ice Age lifestyle. He enjoys going outside and playing caveman in the frigid weather, stalking English sparrows and pretending they're wild horses. (Apparently, cavemen hunted wild horses. One of many new things I'm learning about them.) Unfortunately, his lack of a full suit of fur clothing prevents him from staying out as long as a Neanderthal would.

I guess A. needs to trap more raccoons and get on with the fur clothes.

Jack and I will be huddling inside, with occasional dashes outside for me as I check up on the older children to make sure they haven't gotten so caught up in their game that they hunted their way all the way to the gully beyond the pasture. Which is what they did yesterday, requiring me to hike a quarter mile in 15-degree weather without a coat (I was, however, wearing my fleece, so it wasn't too bad) to haul them back home. Very luckily, the MiL was home so I didn't have to bring Jack with me. Cubby and Charlie got a very stern talking-to about that one.

I'm afraid Cubby has gotten much too confident in his woodsman's ability and has lost sight of the fact that he is not yet five years old. And that his hunting partner is only two years old.

Anyway. It's gonna be cold here. And that's it for your breaking news for the day.

Happy Friday, my lovelies.
Posted by Kristin @ Going Country at 6:44 AM 3 comments:

I took Jack to the doctor yesterday for his check-up. The doctor pronounced him "perfect,"* and then said, "Don't take him outside until spring." I thought he was joking and almost made a light-hearted remark in kind, when he added, "Except to bring him here, of course."

He was not joking. And obviously has no concept of the reality of the third child.

So this morning it was fifteen degrees with a stiff wind off the lake and intermittent snow. And was little Jack bundled up in his cozy house? No. He was at the preschool, because he has two older brothers who occasionally go places and I can't exactly leave the baby at home.

Jack was asleep when we pulled up in front of the church that houses the preschool. I had a blanket draped over his car seat, which of course promptly blew askew as I sprinted with the older two boys the thirty yards or so from the street to the door of the church. I heard one shocked cry from Jack as the cold air reached his exposed face, and then we were at the door and he was fine and back asleep.

I suppose I could get one of those covers that are made to go all the way over the car seat to prevent any cold air from reaching the baby, but then how would I toughen him for his admittedly chilly life ahead? Just don't tell my doctor. He's from India. I don't think he's reconciled himself to winter in upstate New York.

After we get into the church building, we have to go downstairs to the basement, which is where the preschool is actually located. So I hauled the car seat down, then back up, and Charlie and I repeated the race outside with the baby to get to the van. After I got the baby in the car, Charlie strapped in, and all the doors closed, I allowed myself a brief gasp of, "Holy shit, this sucks," before getting in myself and driving home.

Good thing I only have to do this three days a week.

Labels: all about me, baby stuff, Jack, preschool

You know what the most common reaction is when people find out I have three boys under five years old? "Wow! You're a busy lady!"

The unspoken thought, I'm sure, is more like, "You CRRAAAAZZZYYYY."

The funny thing is, I am not in the least daunted by my three sons at the ages they are now. At least, not most of the time. You know what I find daunting? In thirteen years, I'm going to have a thirteen-year-old, a fifteen-year-old, and a seventeen-year-old. Three teenage boys in one house? Now THAT is crazy. 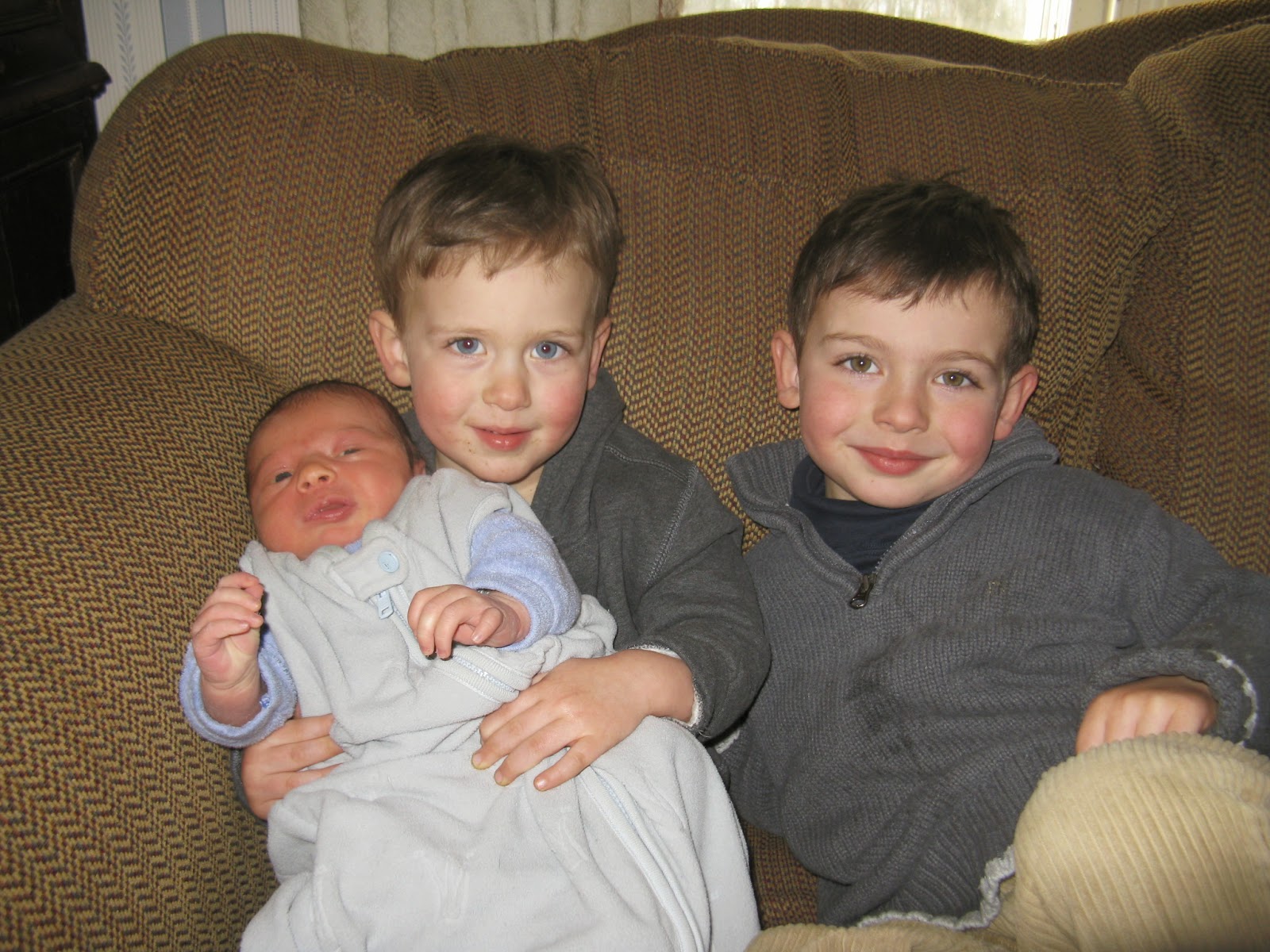 Let's just revel in this for now, 'kay?