There's a Clifford the Big Red Dog book in my bathroom, along with a step-stool under the sink and a miniature plastic toilet . . .
My kitchen ALWAYS contains Cheerios . . .
A garishly colored plastic car resides next to my bed, along with a cloth book that begins, "Singing, swinging little monkey lives high above the ground . . ."
The washing machine is always running . . .
There's a miniature wooden barn on the floor of the living room . . .
The kitchen floor is currently home to a plastic alligator with wheels, a wooden hammering bench with pegs, and a couple of crumpet rings that the MiL has not used for crumpet-making in a decade but that roll most satisfyingly across the sloping floor . . .
And my shoes can be found in any room downstairs, as a certain small-footed someone is fond of stepping into them where they are left next to the door so he can clump around and pretend he's big.
Yup. Must be a toddler in the house.
Posted by Kristin @ Going Country at 4:14 AM 2 comments:

I Just Liked This

I just found this random photo from our trip to Wisconsin this summer. Somehow it reminds me of a life insurance ad or something. But in a good, sentimental way, not in a "buy life insurance so your precious child doesn't end up in the workhouse when you kick it," kind of way.
Anyway. The photo . . . 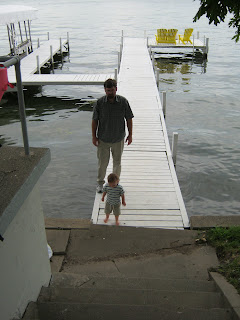 Blood for the Blackberries

I may have mentioned before that I am not a fan of using gloves when I'm working with my hands. I find them clumsy and irritating and I would rather just go without. Although even I am not fool enough to mess around with those vicious blackberries without protection. Except . . .
Yesterday when we were returning from checking the chicken's nest in the hay barn, Cubby asked for grapes. The grapes grow along the edge of the garden, so we went into the garden and I found him some grapes. Then, since he was happily engaged with his grapes for a few minutes, I thought I might as well do something useful in the garden. The blackberry patch was in a very sad state, mostly neglected and grown up to weeds four feet tall.
I thought I would just pull some of the ones around the edge of the patch. I thought I would stay away from the canes themselves and just work on it for a few minutes. I thought I would be smart and just come back to it when I had gloves.
Yeah. Ten minutes later when Cubby was ready to leave the garden and I went to pick him up, I saw the dried blood on my hand. I guess I had sliced myself with one of the weeds and didn't notice.
Such are the perils of unplanned gardening.
Posted by Kristin @ Going Country at 4:09 AM 3 comments:

The Things I Do for Eggs

If only it were as easy as going to the store and doling out three bucks for a carton of eggs. Or even just gathering the eggs my own chickens lay in nesting boxes. But no, that would be too simple. Instead, I run the Egg Obstacle Course every day.
The first egg is the one I do actually find in the nesting box in the coop, which is nice. Except to get to the coop I have to either climb over a gate that the sheep have broken and so it has been rendered immovable by the pallets used to shore it up, or I have to pull down the enormous piece of plywood that is serving as a makeshift gate at the other opening. That plywood is really, really heavy. Suck.
So that's egg number one.
Next stop is the dog pen, where one of the hens likes to go all the way back into one of the dogs' little cubicles to lay her egg in the straw there. So I have to crawl into the cubicle to fetch the egg, often whacking my head on the wooden roof and usually staining the knees of my jeans with mud and sometimes the black walnuts that fall in there.
Egg number two.
The third egg is laid behind the dog pen. To get to that one I just have to step over the lawn tractor parked in the shed. And be faster than the dogs, who have free access to that nest, as well.
We're up to three eggs.
Next I'll check the nest under the forsythia hedge, also vulnerable to dog thievery. To get to the nest in there that's right next to the fence enclosing the ram pasture, I have to either crawl under the forsythia hedge about four feet, which is a scratchy, messy endeavor that is also no good for the knees of my pants, or pull down that awkward plywood again, go into the ram pasture, climb over the scrap wood that's accumulated by the fence, step over the electric wire that runs right next to the fence on that side and balance that way straddling the electric wire while I lean down and reach my hand through to grab the egg on the other side of the wire fence.
I haven't electrocuted myself yet in my quest for egg number four, but I'm waiting for it.
Continuing on to the hay barn, where one hen has made her nest way at the top in the back. To get to that one I have to heave myself up four layers of hay bales, helpfully arranged like really, really high steps, and then step over the center beam and climb around until I get to the place where the hen has burrowed into the hay. Sometimes she's still up there when I check, so I have to do it again later when I think she might be done.
Five eggs now, and onto number six. And sometimes seven.
After climbing down from the hay barn, I go through the garden and around to the livestock gate to the paddock. Rather than unchain it every time, I just climb over it and wade through the disgusting mess of sheep shit and mud to get to the other side of the hay barn, where two hens have been laying. I don't have to climb up the hay to get those eggs, but sometimes there's only one when I check, so I have to check again later for the other one.
And after all that, if I beat the dogs to the punch, I get my seven eggs a day.
Makes you appreciate an omelet a whole lot more, I'll tell you that.
Posted by Kristin @ Going Country at 3:47 AM 5 comments:

The Force of Nature

I have come to the conclusion that Cubby, like most toddlers I'm sure, is simply a force of nature. Something like a cyclone or a hurricane--ferocious, unstoppable, and exhausting. He just . . . never stops. He's climbing chairs, climbing tables, climbing stairs. And then falling off of tables and chairs. Not, thankfully, falling down stairs. Yet.
He runs and he crawls and he climbs and he pounds on things. He talks non-stop (not always understandably, but more so all the time) and chases the cat, the dogs, and the rooster. That last one is discouraged, since the rooster has serious spurs that he has yet to use on a person and I don't think he needs to try them out on Cubby. But Cubby chases him anyway. Because Cubby is a force of nature and cannot be tamed.
So when The Force woke up early this morning coughing and snuffling and generally evidencing all signs of a cold, I was unhappy about the prospect of multiple days of snot, but maybe, kind of, sort of not too unhappy about the prospect of a somewhat more subdued Cubby.
HAAAAAA.
For about half an hour after he woke up he was whining and crying and refusing to be put down NO NOT FOR A SECOND, MOM, I AM SICK AND PATHETIC AND YOU WILL COMFORT ME.
And then he was done with the pathetic and back to the pinballing off the walls and defying gravity at every turn. So I guess not even a cold can get Cubby down.
His mother, however, might be another story.
Posted by Kristin @ Going Country at 6:24 AM 2 comments:

Labels: all about me, baby stuff, Cubby

This Post Brought to You By a Photo Dump

Let's see what random images have been languishing on my camera for a week now because I'm too lazy to plug the thing into my computer and upload them . . . 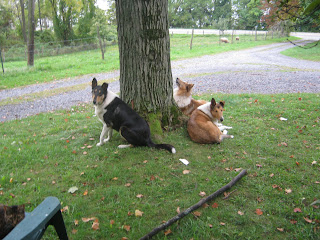 Ah. The mighty raccoon hunters, here awaiting the possibility that a baby squirrel will fall out of this tree and into their waiting mouths. Which it did, later in the day. Sucks for the squirrel, but one less rodent to scratch around in the attic directly over our bed. 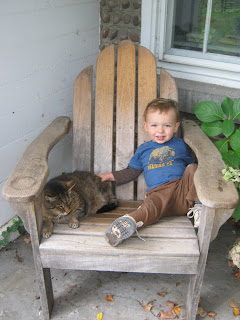 A boy and his cat. Cubby is an equal opportunity pet lover. 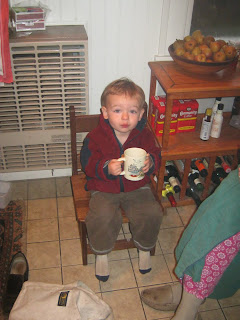 Big boys get to drink their own tea out of their own mug like the big people do. Sitting on their own chair. It was pretty exciting. Also, as you can see, pretty cute.
Also on my camera but not posted here is a picture that A. took of his homemade knife--what I insist on referring to as his shiv, much to his displeasure--on top of the rabbit he skinned with it. (The rabbit wasn't skinned yet, though. That would have been too gross.) I figured you didn't really need to see a dead bunny and its skinning implement first thing on a Monday. You're welcome.
Posted by Kristin @ Going Country at 6:49 AM 5 comments:

A. is supposed to be going to get a new ram this morning. Ever since Donnie the ram went to his reward last winter, we've only had ewes and ram lambs. It's been kind of restful. Even with a good, relatively docile ram like Donnie, you don't want to turn your back on him. Or do this: 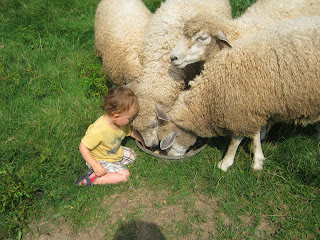 It's nice having some animals that don't bite.
But no ram means no lambs in the spring. And that means no lamb meat in the freezer next fall or leg of lamb for Easter or lamb kebabs on the grill in the summer or . . .
Well. Bring on the ram. They may be a pain in the ass, but they have their uses.
Posted by Kristin @ Going Country at 5:05 AM 3 comments: