Long version: I had to work, and so there were leftovers. And quick-cooking sausage. The end.

Short version: Camp food for campers, mystery food for me

Long version: The children all received fishing poles from my parents, and so then, of course, A. had to take them fishing. The lake he took them to is a couple of hours away, so they went in the afternoon on Saturday, planning to camp that night. They took with them summer sausage, cream cheese, cheddar cheese, cucumbers with salt and vinegar, blueberry cornmeal muffins, celery sticks, apples, peanut butter, and some cookies Miss Amelia gave me.

But they actually caught their own dinner. 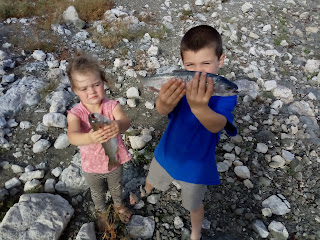 Proud fisher-people with fish. (It was very windy, as you can tell from Poppy's hair.) 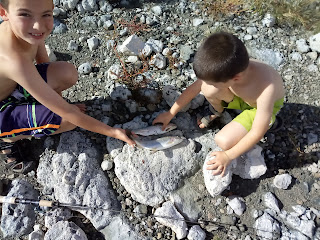 More proud fisher-people with fish.
Incredibly, every single one of the children caught at least one fish, most more than one, for a total of nine trout. They ate some for dinner that night, cooked over their fire, and brought the rest home for the next night.
I don't really love fish (or fishing, or camping, or, um, anything outside other than my garden), so I was fine with missing out. Especially because I got to have something particularly tasty and unusual for me to eat for my own dinner. But instead of telling you all about it, I'm going to let you guess.
I had bacon and mayonnaise in the refrigerator, lettuce and tomato in the garden, and fresh bread from that day's baking. With those, I made my dinner. And I bet you can guess what it was. (Answer at the end.)

Long version: A. brought home five rainbow trout and cooked them very simply by broiling them whole. He also made a sauce for them out of butter, lemon juice, and fresh dill from the garden.

When I was looking at the trout on Poppy's plate before dinner (which, since it was entirely whole, was looking back at me), I was thinking, "Gross. That milky white eye and gaping mouth are really unappetizing." 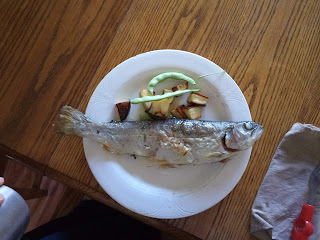 STOP LOOKING AT ME, FISH.

And what did Poppy do when confronted with the staring, gaping fish?

She ate the eyes. Like, before anything else and completely on purpose. She just dug her tiny fingers right in and popped the eyes out and ate them.

I shouldn't have been surprised. How could she be otherwise, growing up the way she has? And hey, maybe she's just on the cutting edge of the next foodie trend.

I made the rice pudding for our Sunday dessert because I was prevailed upon to take home four bags of white rice and a lot of raisins from school. They were the latest excess from the commodities program. I don't know about you, but rice and raisins together for me just mean rice pudding. A. was VERY EXCITED that I was making rice pudding, especially when I told him I asked the MiL for her recipe, to make sure it would be just like when he was a boy.

I made a double batch, which took almost four hours to cook in the oven. The oven was on anyway to make brisket and to cook a whole squash, so it didn't matter. The only small issue was that somehow--either because of small children messing with knobs or me accidentally bumping the knob--the oven temperature got set all the way up to 450 degrees in the last half hour the rice pudding was in the oven.

Luckily, I discovered the problem before anything burned, but the rice pudding was more dry than I would have liked. Still delicious, though.

Long version: Since we had the trout for dinner on Sunday, I had a whole brisket I had cooked that day just sitting in the refrigerator waiting for me when I got home from work on Monday. Yay. I had already sliced it, so I just heated it up with barbecue sauce.

The celery sticks are a pretty anemic vegetable, but they were left over from the camping trip, so I just threw them on the kids' plates to use them up. I did make them the curry dip (curry powder+mayonnaise) to make the celery sticks more exciting. Or something.

In case you were wondering what is NOT a gross brand of mayonnaise, I recommend Best Foods/Hellman's or Duke's. Duke's is my favorite because it has no sugar at all in it, but it's not nationally available unless you order it online. Which I do.

And speaking of mayonnaise (oh, were you done with that subject? I wasn't!), this is a very funny article about a face-off between Hellman's and Duke's. The author mentions that she used to eat potato-chip-and-mayonnaise sandwiches as a child. I DID, TOO! With the addition of iceberg lettuce, which of course made it much healthier and more wholesome. Ahem.

Long version: Poppy and I started a new batch of sauerkraut this day. 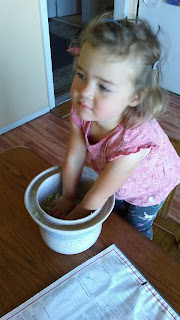 Kneading salt into cabbage will entertain a toddler for quite some time.

I opened one of the jars I had canned last time for this meal. I don't know what it is about sauerkraut that makes pork taste so amazing, but it really does. A lot better than you would think fermented cabbage and salt would be.

I've actually been out of fresh potatoes for a couple of weeks, but I did still have those bags of partially roasted potatoes in the freezer, so that's what I used.

I made a chocolate cake because it was Michaelmas; that is, the feast day for Saint Michael the Archangel.  The idea is that you make a devil's food cake and then stab it with some form of sword, as Saint Michael did when he cast Satan down into hell.

I did this a couple of years ago, but forgot about it last year. I almost forgot about it this year, too, but I happened to see on our calendar what day it was, and Poppy and I were in the kitchen anyway making sauerkraut and so on, so we made (great-great) Grandma Bishop's chocolate cake, too. 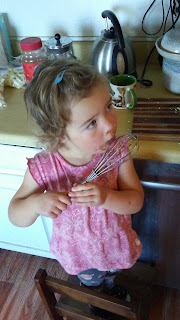 Licking the whisk is another fine Michaelmas tradition.

When I announced after dinner that we would be stabbing our Saint Michael cake (intending to just use toothpicks), Cubby ran off and returned about 90 seconds later with swords he had made out of wooden skewers.

So we said the Saint Michael Prayer (which I must admit is probably my favorite prayer), stabbed the cake, and then ate it. 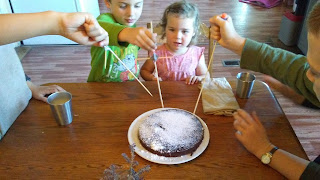 Liturgical living at its finest.

Long version: In the rush of a work morning, I forgot to take anything out of the freezer for dinner. I mentioned this to A. on the bus, and he took out some pork country ribs when he got home from the bus run. I didn't know he did, though, so when I got home it was like one of those cooking shows where the contestants are given a mystery ingredient and 30 minutes to make something palatable.

I cut off the cleanest bits of the ribs, diced them, and made stir-fry with them. The vegetables were a bag of frozen stir-fry vegetables that included bell peppers, broccoli, snow peas, and mushrooms. No onions, though, and stir-fry MUST have onions, so I did fry some slices of onion. Otherwise, it was all frozen stuff, which made it very quick.

Long version: This was the remainder of the pork ribs. I cut them into small pieces, then stewed them with a bunch of diced fresh tomatoes and a cube of garlic scape pesto. I also added more garlic in the form of powder, plus some fresh basil, then covered with shredded asadero cheese at the end.

There wasn't quite enough for all six of us, but Poppy and Charlie elected to have fried eggs instead, so it all worked out.

Oh! The guessing game! I'm sure you guessed, but it was a BLT. Of course. I mean, I'm sure there are other delicious things you can make with bacon, mayonnaise, lettuce, tomatoes, and bread, but probably nothing I would want to eat more. Yum.

* If you are one of the many people who love Miracle Whip, that's cool. You can have my share. 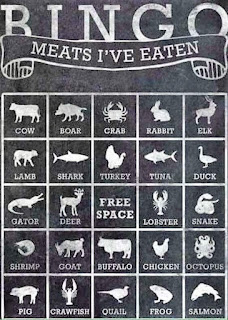 Not only could I make bingo without any problems, there are only four things on this card that I haven't eaten: boar, gator, snake, and shark. And the only reason I haven't eaten those is because A. has never happened to trap or shoot one.
However! I don't see squirrel on that card. Or beaver (and let's not forget the tail). Or lamb testicles. So I'm gonna go ahead and give myself full marks for an eclectic carnivorous lifestyle, even if most of it was only because of the man I married.
So how about you? What of those meats have you eaten? Are there any you would absolutely refuse to try?
* I did try to find the original source for this, but as is so often the case on the Internet, it seems to have sprung forth fully formed, like Athena.

I just realized that this post from last week about what I'm reading right now was post number 3,000 published here.

Yes. Three thousand posts. If I may state the very obvious, that is a LOT of posts.

It's appropriate that a milestone post like that should be about something so utterly random, because that's been the main theme of this blog from the very beginning: random.

So, here's to carrying on. And here's to all of you for reading my personal randomness 3,000 times. Thanks for being here.