Yes, I cooked this week. We ate this week. Let me tell you all about it in great detail.

Long version: I actually cooked dried beans this time, because I found half a bag of navy beans in the pantry that I figured should be used up. Otherwise, everything was exactly the same as all the other times I make Italian sausage. Which is a lot, because sausage is basically a pre-seasoned, quick-thawing, tasty convenience food. Hooray for sausage.

Long version: Should it be called shepherd's pie if I made it with beef? Shepherds don't herd cows. Is it a rancher's pie? Is this an obnoxious query? Yes.

Shepherd's pie is a lot faster to make if your ground beef isn't frozen when you start. Especially if you're starting with two pounds of it to make a full 9x13 casserole full.

I know. My professional cooking tips are what keep you coming back.

Long version: I ran out of my standard soy sauce and was left with only the weird "mushroom flavored" soy sauce I bought by mistake some time ago. So I used that, and it made the stir fry taste a lot more like cheap Chinese food. Not in a bad way, though. It was good, but it definitely tasted more like restaurant food. I'm pretty sure this is because of the "caramel coloring" and MSG-like substances listed in the ingredients. Wholesome.

Long version: I have quite a few beef soup bones that I need to use, so I made some beef broth in the morning. When I strained the broth, I pulled about two cups of meat off the bones, which I used to make sandwiches for the boys by elegantly dumping store-bought barbecue sauce in with the meat.

All fancy food, all the time.

Amazingly, all three boys love beets. Cubby used to be the only one who ate them, but then last summer they all discovered that eating beets makes their teeth pink, which is of course all it takes to get kids to eat beets, right? Well, my kids, anyway. These were grocery store beets, which were definitely inferior to garden beets, but that's no surprise. And the boys still ate them. 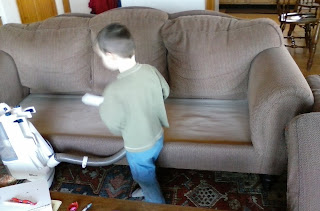 In other domestic news, letting Jack vacuum the couch for me is the best idea I've had in awhile. He loves it, and it means there isn't a shameful mess lurking under the cushions. Hooray.

Long version: A.'s favorite method of preparation for meat--any meat--is fried in olive oil, then simmered in a marinara sauce and covered in melted mozzarella cheese. So I did that with the pork chops, and then used some of the sauce for pasta.

I fried the cabbage and onions in bacon grease instead of butter this time, because I wasn't eating dairy at that time (another experiment to try to help out the itchy baby). I also was not drinking any caffeine or eating any gluten. I would not recommend doing this with chronically low sleep, by the way. Punishing.* 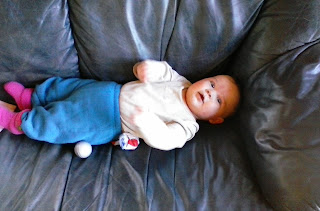 Maybe she's punishing me because of the outfits I put her in. Definitely not an infant fashion plate.

Long version: "Re-imagined" means I did something with leftovers other than just heat them up. In this case, I diced the leftover pork chops and fried them in some olive oil, then added the leftover rice and the marinara sauce from the pork chops along with some grated Parmesan. Fancy.

Leftover beets can never be fancy. Convenient, though.

Long version: I made the taco meat this time from ground beef (plus onion, garlic, chile powder, and cumin). This was one of the nights that Cubby had a huge second serving of meat, and so of course Charlie and Jack must do the same, and then the entire pound and a half of meat was gone.

This competitive eating will really be something to behold when they're all teenagers, I suspect.

When onions kind of come apart on the pan and the thinner layers char a little during the roasting, the charred ones taste a bit like onion rings. Without the greasy batter coating, that is. Yum.

* I have since resumed drinking coffee, and the relief is absolutely indescribable. But I'll probably describe it anyway in a whole post next week. So stay tuned for that thrilling story.

From Bad to Worse


I have become something of a belated watcher of 1980s action cartoons. Specifically, Transformers, Voltron,  and He-Man. The only one I remember watching myself as a kid was He-Man, but A. remembers them all fondly and wanted to share them with our sons.

Thus, the boys have watched every single episode of all of them. And they are all terrible. Well, terrible for an adult, anyway. The kids love them. In order of terribleness, from bad to worse, I think it goes Transformers, then He-Man, and then Voltron is the cheesiest of the bunch.

But now I have seen the absolute worst, and it is Protectors of Universe.

No, it's not missing "the" in the title. Or rather, it is missing it, but it's like that on purpose, apparently. Because it turns out this is a 1983 South Korean knock-off of Voltron. I guess the "the" got lost in translation.

Cubby brought it home from school. He chose it from the prize box in his class, and he was very excited, explaining that it was Voltron's brother.

The animation is terrible. The story--such as it is--is abysmal. And the English dubbing is absolutely laughable. Only not very funny.

But it has the requisite blasting sounds and action scenes, and so the boys have actually watched the worst movie in the entire world. 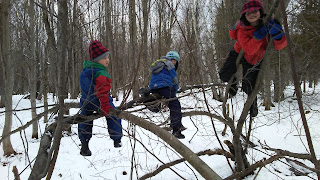