The Alpha and the Omega


In the beginning, there were microgreens. And in the end . . . 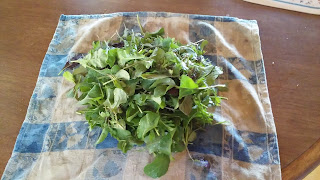 There's a serious rain and windstorm coming our way tonight, so A. took advantage of the sunny and warm weather today to more or less pull out the rest of the garden. 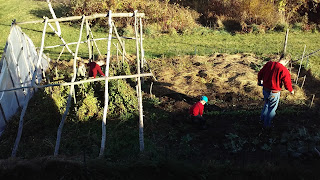 With the dubious help of his minions, of course.

I was not helping, as I was busy in the house with this one: 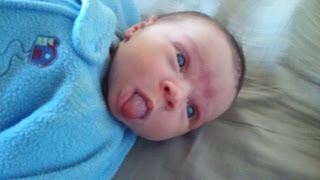 The microgreens are from the salad greens and arugula A. planted a month or so ago. There really hasn't been enough sun on the garden at this time of year for them to grow much, so he decided to just cut them at the micro stage.

He also filled a box with tomatoes in various stages of ripeness, meanwhile congratulating himself (and justifiably so) on building the woodchuck greenhouse so he can be harvesting the last of the tomatoes in late October.

The remaining few beets came out, too, leaving only the collard greens in the garden. A. keeps asking me if he can pull those out, but I refuse to let him. Collard greens taste better after it gets cold. And anyway, they can handle a lot of cold weather out in the garden, where it's much easier to store them than in my refrigerator.

So collard greens and the garlic (also planted by A.) in the garden; tomatoes, microgreens, and beets in the house. Thus ends Gardening Season 2017.

A round of applause for A., a reluctant but successful gardener who ensured my winter's supply of Finny's sauce. He done good. 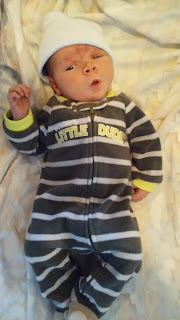 Yeah, Poppy pretty much lives in this gender-inappropriate sleeper. And the reason she lives in it is that it has a zipper.

May I take this opportunity to remind you of my loathing for snaps on infant apparel? It has not abated after almost eight years and four children.

Poppy is currently clad in a different sleeper that has pink edging and a pink bird on the butt (I don't know why, either). It's very cute and all, but I will only put it on her during the day when I have to wash the zippered sleeper. I must have the zippered sleeper clean and ready to go by night, so that I'm not blearily trying to match up snaps during a 3 a.m. diaper change.

The 3 p.m. diaper changes are marginally less bleary, so she only wears the snaps on whatever day ends up being wash day for the masculine-but-zippered sleeper.

No, I don't wash it every day. Maybe every three days. She hasn't complained yet.

And now that I've gone on for several paragraphs about baby pajamas--my life really is just this thrilling, yes--I'll just quickly share that Poppy took to nursing so enthusiastically that she didn't lose the customary weight in the first few days of her life, instead gaining over an ounce in the time between leaving the hospital and going to the pediatrician on Monday.

Also, she actually sleeps relatively well, although last night was not so great, as you could tell if you could see my red-rimmed eyes. I can't remember if my other children were this way in the beginning and then it all went to hell after a couple of weeks, but I can always cross my fingers that she'll be one of those mythical babies that sleeps through the night after, like, three weeks or something.

Or maybe she'll transform into Raging Colic Baby after three weeks! Who can tell? The uncertainty is what makes infants so exciting.

Labels: all about me, baby stuff, country wisdom, Poppy, randomness

SuperNana Rides Off Into the Sunset


A. drove my mom to the airport this morning* so she could go home to her desert oasis. She's been here for two and a half weeks, cooking, cleaning, doing laundry, making school lunches, entertaining the three feral boy children . . .

I think it might take her awhile to recover from this trip.

She's got three weeks, at which time she and my dad will be coming for Poppy's baptism. I won't expect her to clean my house when she comes back, though.

Godspeed, SuperNana. You'll be missed. Enjoy your quiet, clean, and non-chaotic house, and we look forward to seeing you again soon.

* And in fact is still driving right now, because the airport is three hours away. One way. You have to REALLY want to see us to get to our house.

P.S. I know it's mean of me to keep blathering on without posting any baby pictures. I'm having camera issues, but I'm working on it. Because I know your life is a sad thing without a photo of my infant daughter in pajamas proclaiming her "Mommy's Little Dude." Or maybe it's just me who finds that funny.
Posted by Kristin @ Going Country at 9:42 AM 3 comments:


There's this game the boys play that they call the Hammy Game. I have no idea what the game entails, except for a lot of shrieking and hysteria.

That describes almost all of their games, actually. So I guess the only notable thing about the Hammy Game is that they all have their own names in it.

Charlie is Beefy, which if you've ever met skinny Charlie you'll know is hilariously inappropriate. That kid's as far from beefy as he could be.

Jack is Hammy, a name unfortunately bestowed upon him unwittingly by his real Daddy as an admiring statement of Jack's sturdy frame. That nickname stuck and somehow became the Hammy Game.

When Poppy came home from the hospital and all her brothers were clustered around her to admire her (and poke and prod her, of course), Cubby noted her fabulous hair and declared, "When she's old enough to play the Hammy Game with us, we'll call her Miss Fluff."

Watch out, world: Daddy, Beefy, Hammy, and Miss Fluff coming at you in a few short years.