A. is re-creating the Erie Canal in our front lawn. 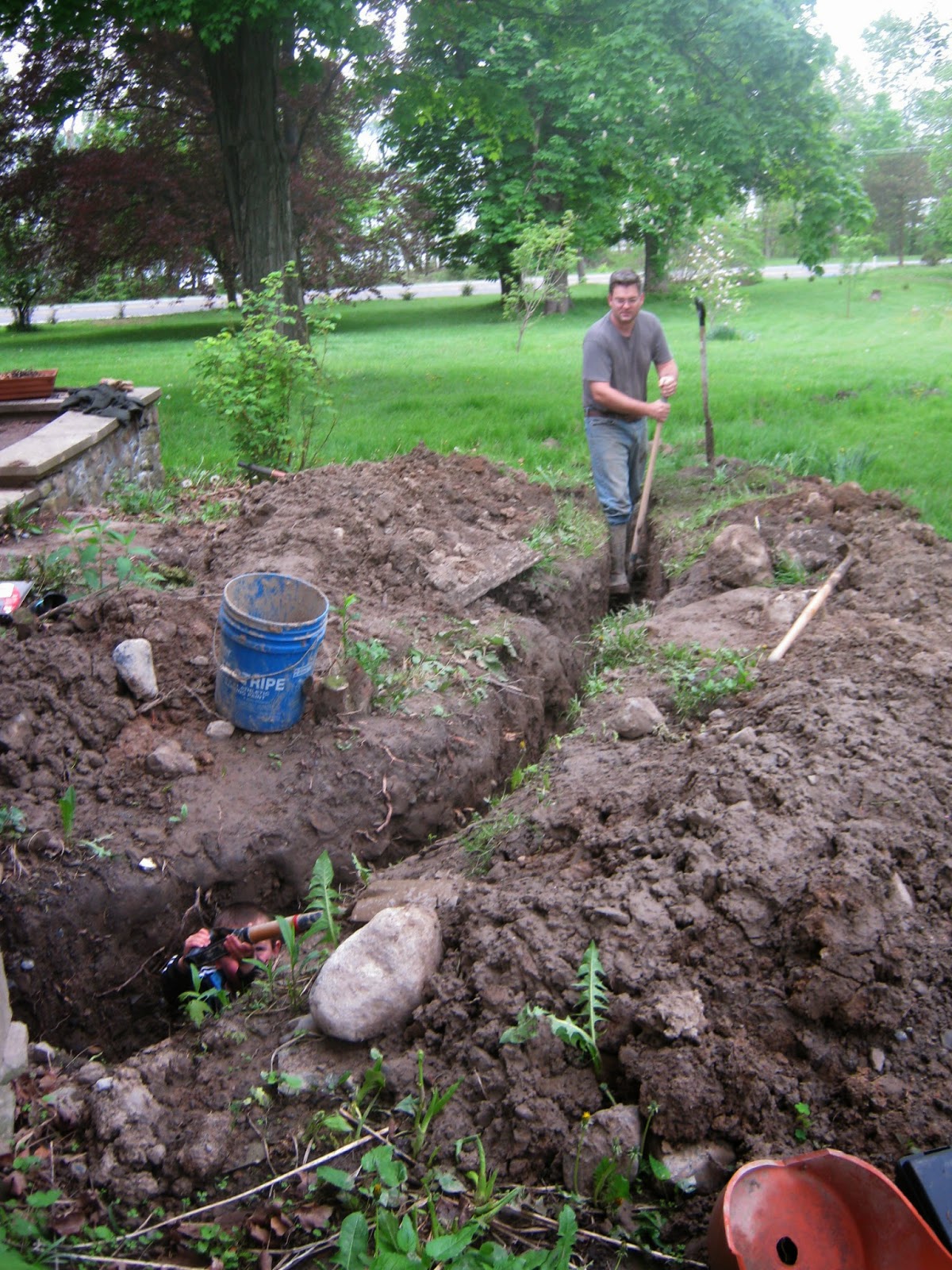 And here he is, working on the first lock.*

Okay, so really he's just digging a trench to try to restore the old gravity drain to working order, so that we don't have to rely on the sump pump to drain the cellar, which it's not doing too well with at the moment and A. is starting to worry about undermining the foundation and blahblahblah.

The most boring adult talk ever, yes. Let's skip all that and go straight to the important part: how this ditch affects me.

OH MY GOD, THE LAUNDRY.

Not just A.'s laundry, either. Although that's bad enough, as I'm sure you can imagine the state of a man's clothes when he's been digging in a six-foot-deep muddy trench for eight hours. My first stage of rinsing involves a bucket and the hose outside.

No, I must also contend with the laundry produced by A.'s little helpers, who are not so careful to confine their filth to just one set of clothing. 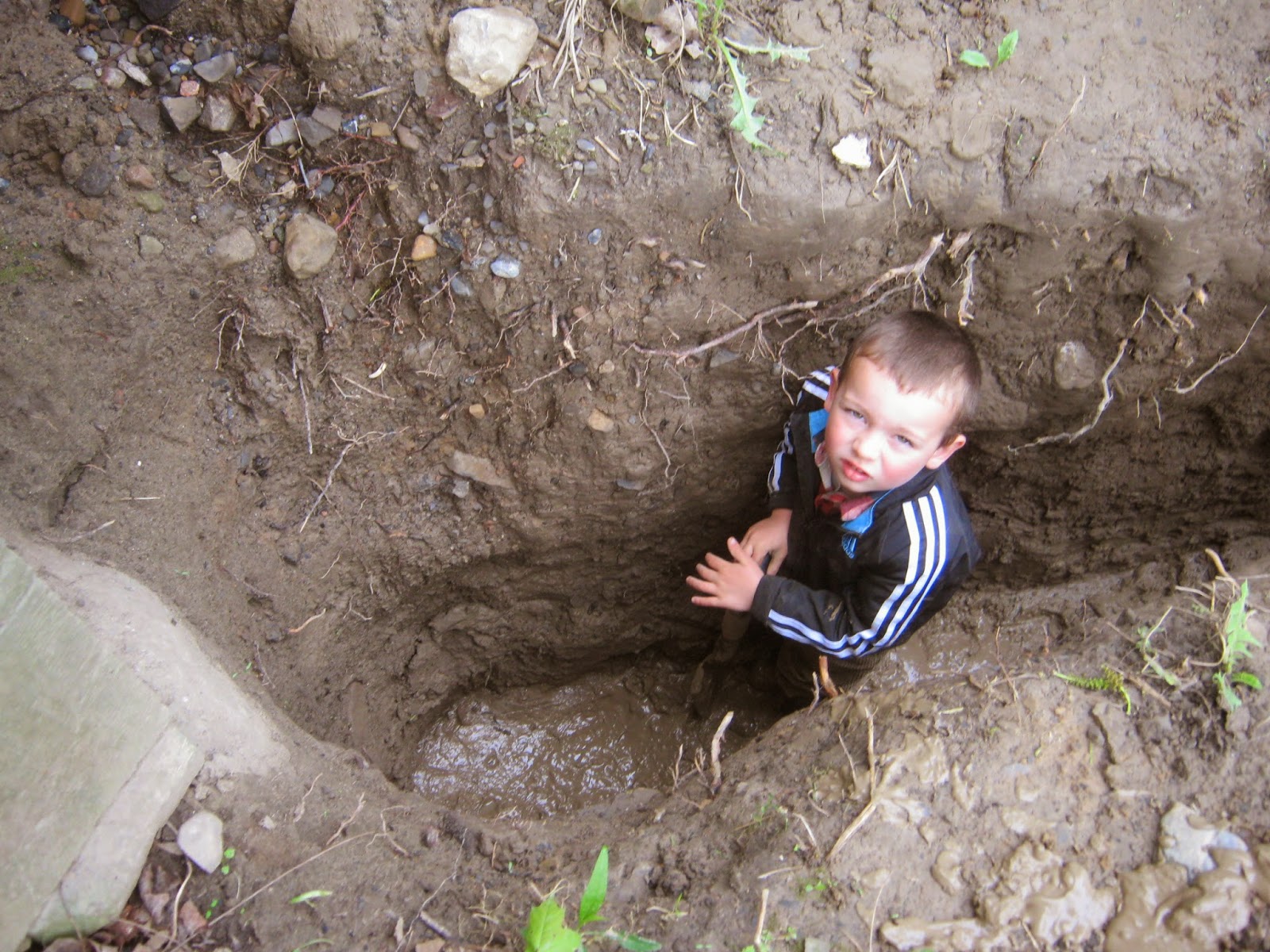 You think you're keeping this kid out of this hole? You think wrong.

Both Cubby and Charlie are drawn to this trench as a moth to a flame. They get in it multiple times a day, almost ensuring the need for a complete change of clothing every time. Last night, after a suspiciously quiet ten minutes, I found them both in the trench, where Cubby had been carefully applying a very thick layer of mud to Charlie's front, much like a plasterer would plaster a wall. Charlie was watching with great interest, not upset at all.

I, however, was not so enthused about this episode. Getting those clothes in a fit state to even go in the washing machine--where they have to be soaked and pre-washed twice before even starting the actual wash cycle--required scraping with a stick in addition to the usual swilling multiple times with hose water in a bucket.

I can't even speak of the horror that is their footwear after trench time. It's appalling.

I have no idea how much longer this project is going to go on. I'm sure Charlie and Cubby hope it takes all summer. I, for one, will be very relieved to see the end of it. For purely selfish reasons, of course.


* This photo actually doesn't come close to conveying the enormous length and depth of the trench, because I took it last week. Since then, A. has continued digging way out into the grass behind him there, and also dug down deeper into two big test holes on the sides to try to find the elusive ancient drain. But I'm too lazy to bring the camera out again and take an updated picture, so this is the best I got. Believe me when I tell you that this is a serious feat of hand digging that no one but A. would attempt.

Labels: all about me, Blackrock, Charlie, Cubby, domesticity, manual labor, the A team

You Can All Thank Leah

I was all set to do a riveting post today all about the joys of chive blossoms*, but Leah saved you. She tagged me for a meme. A meme that I read her answers to and thought, "I might just steal this and do it myself." Then I got to the end of her post and there I was, tagged for it.

Not that that necessarily means I'll do it. There are plenty of things I've passed on despite being specifically singled out. I can be a real pisser like that sometimes. If I don't feel like it, I won't do it.

But I felt like it. And I really like Leah--she is, among other things, a really wonderful writer who still writes just about herself and her life, which is all I'm really looking for in a blog--so here we go.

1) What is your favorite type of cheese? On a daily basis, it's sharp cheddar or cream cheese. But if it smells or has purposeful mold on it? No. Never.

2) What are you excited about? My sister and niece are coming to visit in a couple of weeks, and it's always exciting when my family makes the long and arduous trek to Blackrock for a visit. Also, the real watermelons--that is, the monster ones with seeds--have started to appear at the grocery store. Righteous.

3) How did you celebrate your last birthday? In Tucson with my children and husband, plus my parents and my brother, sister-in-law, and two nieces. It was the best birthday I've had in a long time. As I recall, A. took Cubby to the Desert Museum for the morning and Charlie took something like a three-hour nap at the same time, so I essentially had a child-free morning far from the chores of home. My mother's wise choice of a Cold Stone Creamery peanut butter ice cream cake also contributed significantly to the joy.

4) What is on your bedside table? Nothing. Literally. Not even a clock. I can't stand how they glare in the dark, so I just look at the one on A.'s bedside table. It's a Thing I have.

5) What do you order from the movie theater concession stand? I never go to the movie theater, so this is a hypothetical question for me. But when I used to go, I never got anything, both because of the outrageous cost and because if I eat anything, I want to drink something, and then I have to get up to go to the bathroom and I can't take the stress of missing part of the movie while I race to the bathroom. That sounds really weird, doesn't it? But true.

6) Do you have a garden? Do we have a garden? HAAAAA. Yes. A very large one. What's growing? So glad you asked, since I've been meaning to do a garden update for the spring and haven't gotten around to it yet. The asparagus has been growing for awhile, but not well and I've given up on it in favor of heavy mulching to quash the weeds. We're also eating a lot of lettuce and radishes right now. The enormous Red Russian Kale plant that I left in self-seeded prolifically. I do love volunteers. The garlic is looking very nice, as are the onions the MiL put it. The snow peas came up nicely, as did the chard. The long row of Dragon Tongue beans--a new variety for me--came up perfectly. Most of the tomato plants are in. So are potatoes, basil, broccoli, turnips, kohlrabi, carrots, beets, and corn, all thanks to the MiL's labors. That leaves cucumbers, zucchini, and squash to go in, probably this week. Oh, and the blackberries have lots of nice flowers on them. And the mulberry tree has a lot of tiny green mulberries.

7) Any summer plans? We always have a lot of visitors in the summer, which is inevitable if you live on a lake, so we rarely go anywhere. Not that we could--who would take care of the garden?

8) What TV couples are you rooting for? I don't watch TV, so pass.

9) What's the last thing you bought? Groceries. The last non-grocery thing was a pair of sandals for Cubby.

10) What's one thing you are passionate about? Food. Eating it, growing it, people's attitudes about it . . . food fascinates me like nothing else. But never call me a foodie, please. Because that, I am not.

11) What are you grateful for this week? Finally not being sick, after more than a month of feeling like shit. Also the spectacular weather that has made it so easy to be outside with the kids, which makes my whole life easier as a consequence. Children's winter apparel is not my friend.

Okay! Done! Anyone still reading? Anyone want to do this, too? I'm not into tagging, so if you want to, go for it and let me know.

* Seriously. They're better than the actual chives. I might still wax rhapsodic about them later, so there's that to look forward to.
Posted by Kristin @ Going Country at 6:40 PM 5 comments: