This morning I was washing some dishes in the sink after making a vat of applesauce, and I noticed that the water didn't seem nearly as hot as it usually is. Huh. Weird. We always have hot water here.

Now, the hot water at Blackrock was a highly variable thing. The amount and temperature of the water depended on the time of day, the season, and how much hot water was used that day. Quite frequently, we wouldn't have any water at all, hot or otherwise. But here, the water comes reliably from a well and the water heater heats on demand, so there is always water and it is always hot.

Such is my Blackrock-trained mindset however, that as soon as I realized the water was lukewarm rather than hot, I immediately thought, "Oh God. The water heater isn't working and it's going to take forever to get someone here to fix it and I'm going to be boiling water on the stove to wash dishes and . . ."

But then I stopped myself. This is not Blackrock. Maybe I should think this through with a more rational, modern-house mentality.

First I turned on the hot water in the bathroom to make sure it was a whole-house problem, and not something to do with the kitchen supply. No hot water there at all, so to the hot water heater I went.

I thought maybe there was some kind of thermostat on it I could check, or something obvious I could try.

Indeed there was. Like the bright-red on/off switch right on the front--at, ahem, child level--that was turned to "off."

After I flipped it back on and was rewarded with the whoosh of the hot water heater immediately beginning to heat the water in the tank, I called Charlie in for questioning. He of course vehemently denied touching any switches, but said Jack had been in there a couple of days ago.

I explained to Charlie that he should never, ever touch any of the switches on the machines in the utility area, and that if he sees Jack playing with them, he should tell me so I can make sure nothing got messed up. He assured me he would.

It's nice to be in a house where there are simple solutions to problems that were often major at Blackrock. If only I could find a solution to the monkeying children problem . . .


Sometimes I play a game with the kids we call "Animal," wherein I name an animal and they have to pretend to be that animal.

It always starts very entertainingly, with Cubby pretending to get caught in a trap when they're being mice or Charlie flying backwards when he's being a hummingbird*. Jack just runs after them and falls on them whenever they get on the ground to slither like snakes or whatever. It's all in good fun.

But eventually they get too worked up and every animal becomes one that's attacking the others. Tonight when we were playing and I got sick of harmless bunny rabbits morphing into the Monty Python rabbit, I finally stood up and announced, "We are playing Animal, not Predator and Prey. If I see any more Predator and Prey, this game is over."

And then Jack bit Charlie and Charlie pulled Cubby's pants down and, well, the game was over.

* Hummingbirds are the only birds who are known to fly backwards. That is approximately fact #100,983,110 I never would have learned if not for having children and being forced to read innumerable books about subjects I have no interest in. Also for your trivia enjoyment: Snakes smell with their tongues. You can bust that one out when you're stumped for conversation at your next holiday gathering. You are so welcome.
Posted by Kristin @ Going Country at 4:34 PM No comments:


The steam from simmering chicken stock in this house for hours results in a most excellent blank steamy-window canvas for drawing: 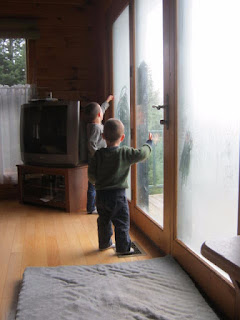 Which in turn results in really smeared windows, but nothing some vinegar can't fix.


If I had to wake up with tummy troubles in the morning, today was not a bad day to be laid low.

There was leftover oatmeal for the kids' breakfast.

Cubby is at school.

I have a lot of beef, duck, and ham broth in the freezer, should the time come today that I feel I should take some nourishment other than herbal tea with honey.

It's foggy and dank outside, so Charlie and Jack are happy to be inside. (Meaning I'm not sitting outside or running in and out to check on them when all I really want to do is slump in the recliner with a blanket.)

There are enough good leftovers for a satisfactory dinner tonight with no cooking required.

Of course, the best-case sick scenario is for me to be sick on Saturday when A. doesn't have to work or go to church. Then I can just hide in bed.

But failing that, I'll take previously-prepared food and a school day.

Labels: all about me, Charlie, confessions, Jack

The Sad Tale of Mr. Lonely


This morning when Jack, Charlie, and I took our regular walk down the road to visit our neighbor's chickens, our neighbor--Ms. Rita--happened to be out working around the barn and she asked the boys if they wanted to see her new rooster.

Now, Ms. Rita already has a rooster. The new rooster was more or less dumped on her because no one else wanted it. It's not unusual for roosters to find themselves unwanted, as I well know, but this particular rooster had a sad story. Whoever had owned it hadn't provided any coop for it last winter. You absolutely cannot do that in this climate without killing or damaging a chicken.

In this case, the rooster's comb, toes, and spurs froze off. Poor thing. I don't even like chickens much, and I still felt sorry for it.

His lack of spurs and toes (meaning no talons) meant that he had no means of defense. So Ms. Rita couldn't put him in with her chickens, because if the other rooster attacked, the new rooster couldn't defend himself. That's why she was calling him Mr. Lonely, because he was in a big dog crate by himself in the barn.

Ms. Rita raises animals mostly for food, so she's not sensitive about the ultimate demise of animals, but she doesn't like to do the killing and butchering herself. I had mentioned before that if she knew anyone who needed to get rid of extra chickens and didn't want to deal with them, we would take the live chickens away.

Away to my stockpot, of course.

And this is why A. was walking down the road at 4 p.m. today holding a live deformed rooster by the feet, trailed by three small boys and a very interested dog.

More than one car passed him during his woodchuck walk home. I can only hope we provide some entertainment in what was a quiet neighborhood before we moved in.

Labels: all about me, chickens, confessions, country livin'

This Could Be Misinterpreted


Jack has not been particularly quick to start talking. At least, not intelligibly. He actually talks all the damn time, in what sounds exactly like long sentences or questions, he just wasn't enunciating any words known in the English language.

He did, of course, eventually start to say some sounds that matched up with actual words. First was "Da." For Daddy. Of course. Still waiting on anything resembling "Mom."

Ingrates, all these kids.

There are other words now. "Dee" for the chickadees that mob the bird feeder on the porch. "Gee" for the hundreds of Canada geese winging their way southward over the house. "Baw" for ball. And so on.

But there are other words that might give some people pause to hear a two-year-old exclaiming with some excitement. "Poop" is understandable, if a mite crass. But "gun"? Well, it is hunting season. He does see Daddy's guns with some frequency these days (safely in Daddy's hands, of course).

Yes. My toddler says "gin." And he says it any time he sees the seltzer bottle.

Great. Not that that makes me seem like a lush or anything.

Now the reason he says this is because whenever I would have some gin in a glass he would of course want some--because nothing tastes better to a child than something an adult is trying to consume uninterrupted--and I would have to say, "No, Jack. That's gin. That's Mommy's. You can't have any. It's gin." And I always add seltzer to my gin. Hence the association.

So now he says "gin" whenever he wants some seltzer in a glass. Super.

The first time A. heard it, he said, "Is he saying gin?" Yes. And it is kind of embarrassing, albeit also funny as hell.

It won't be so funny, though, if he ever says it to anyone else. Like, say, the pediatrician at his two-year check-up, which is coming up soon. That kind of thing can really give the wrong impression. 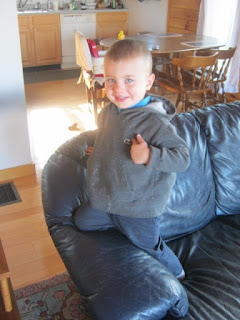 Is this the face of a child who would rat out his mother? Damn straight.