Who's a Good Dog? 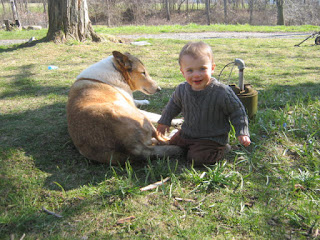 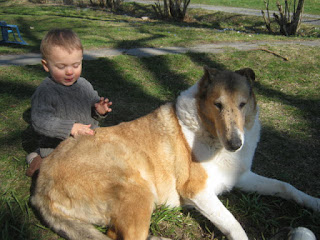 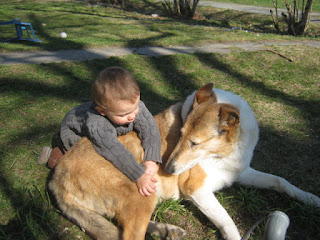 The Domination of Pork

In case you ever find yourself in possession of a twenty-pound* shoulder roast from an old sow, you should know that it will take at least 22 hours in a 225-degree oven to get tender.

I know this because I cooked the World's Biggest Pork Roast yesterday. Or rather, I cooked it the night before AND yesterday. Good thing I started it before I went to bed on Tuesday night, thinking I would just take it out in the morning and have the rest of the day to pull it apart and do something with it for dinner.

When I pulled it out at 9 a.m., it was not tender. It wasn't done at noon. Or at 3 p.m. It was more or less done at 6 p.m. when it was actually time to eat, although I bet I could have left it in the oven for another six hours and it still wouldn't have been overcooked.

I was so exhausted just wrestling the thing out of the plastic wrappings and into the pan that the only seasoning I managed to get on it was some salt. This ended up being a good thing, though, because in addition to being impressively large, it was also covered in an impressive layer of fat that rendered during the long, slow cooking. Thus, I got not only a large quantity of meat, but a respectable quantity of lard, too.

The amount of meat was not actually as staggering as the size and weight of the raw chunk o' flesh made it appear. The bone was huge, so by the time the fat was gone and I pulled out the bone--and we had all eaten our fill last night--the leftovers weren't an unmanageable amount.

The meat was really, really good. But seriously. That roast was SO BIG. A daunting prospect, indeed. I did get more than one meal out of it, though.

It's gonna be awhile before I can work up the energy to deal with the second shoulder, which is still taking up a large portion of freezer real estate. At least I know how long it will take to cook next time. FOREVER.

* I don't know for sure that it was actually twenty pounds, because my kitchen scale only goes to 11 pounds, but if it wasn't a full twenty pounds, it was pretty damn close. It was hard to lift in and out of the oven.
Posted by Kristin @ Going Country at 7:51 AM 2 comments:

Last week when I was making dinner and holding Jack at the same time, I used a fork to take a taste of what I was cooking and managed to stab myself in the corner of the mouth. Not one of my more coordinated moments, but I'll blame it on the toddler weighing down one side of me that put me off balance.

This is a terrible place for a little cut, because of course it never really scabs over and is just kind of there, forever. Well, not forever, but it's been like five days now and it still hurts. Plus, I can't really camouflage it, so it kind of looks like I have a cold sore or something. Pretty.

I went freezer diving this morning and decided I'd better haul out one of the ENORMOUS pork shoulder roasts that are sitting on top of everything else in the cellar freezer. The last pig we had slaughtered was a relatively old sow, and so the resulting roasts are huge. HUGE. 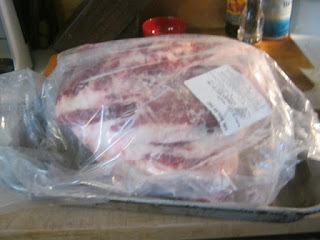 It barely fit in our biggest roasting pan.

I either have to have a party for about twenty people to eat all this at once, or freeze some of it. Probably gonna go with freezing. It would be kind of nice to have some pulled pork in the freezer for those wretched hot days of summer when the last thing I want to do is turn on any heat source for cooking. How long do you think it will take to cook a roast the size of Jack? Probably at least twelve hours, I'm guessing.

'Kay, I'd better go do some laundry. A. took Cubby and Charlie fishing yesterday for the first time this year, and of course Cubby fell in and returned with soaking wet clothes plastered in mud. No fish, though.

Peace out.
Posted by Kristin @ Going Country at 7:11 AM 2 comments: