I've got myself some new garden pest control. Next up: the Colorado potato beetle.
Posted by Kristin @ Going Country at 3:14 PM 1 comment:

The day after The Big Storm, Cubby, Charlie, and I went out during one of Jack's naps to start dragging branches from the uprooted tulip poplar out of the driveway. Cubby and Charlie were all about helping for the first couple of branches, but then Cubby realized how many branches there were, and how long of a drag it was to get them to the gully, and how interesting the water in the gully was.

So when I pulled a few more small branches out the mess for him to drag, he informed me he was done helping. Oh yeah? Think again. At five, he's old enough to help. So I told him that. He responded with whining and ended with the question, "But why do kids have to help? Why don't the grown-ups do it?"

"Because," I said. "You live in this house, so you help take care of this house."

My brother and sister are now thinking to themselves, "Geez, Kris. When did you turn into Dad?"

My father's stock response to our own whining about chores as children and teenagers was, "You live in this house, you work in this house." Obviously a lesson I internalized well.

Cubby dragged one more branch and then started claiming he was tired. My response to this was also less than sympathetic (mostly because I knew his exhaustion would vanish as soon as he was playing again and racing around like a whirling dervish). "Daddy gets tired when he's working too, you know. But does he stop when he's tired? No. He finishes the job. And you will too. Drag one more branch and then you can play."

He did it. I suspect there will be no lasting physical effects from my enforced labor. Although in thirty years, he might find himself forcing his own children to do yard work and using the very same phrases he heard that day from me.

Family traditions are the best, aren't they?
Posted by Kristin @ Going Country at 7:35 AM 4 comments:

And Then the Trees Fell Down

We had a Major Storm on Monday. If not a small tornado, then something very close. It was very localized, basically only affecting the houses on the lake for about four miles. I was inside with the children, having been driven in by the sound of thunder, and we watched the rain start. Then the wind started to pick up. Then it hailed and rained harder and the wind got violent and then trees fell.

When we went outside to inspect the damage after the storm was over, we found a lot of it. 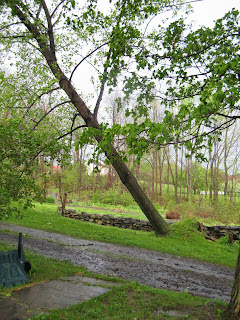 This tulip poplar by the driveway uprooted and landed on a power line. Thankfully, the line held, but we obviously lost power. 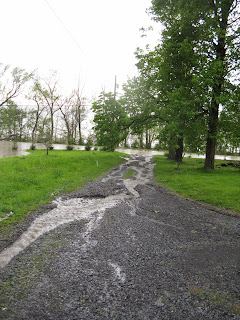 Our driveway turned into a many-branched river. 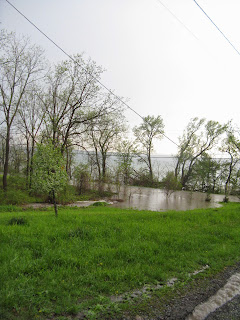 A lake formed at the bottom of the paddock and overflowed onto the road. 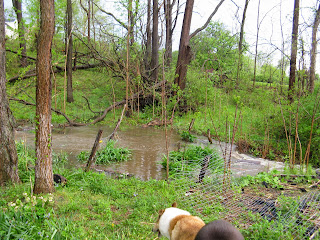 The tiny creek in the hollow became a pond, (can you spot the happy ducks in this photo?) and a Kentucky coffee bean tree fell over. 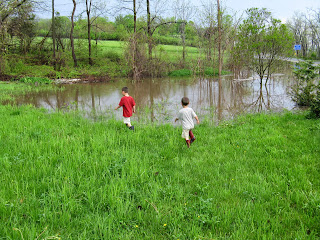 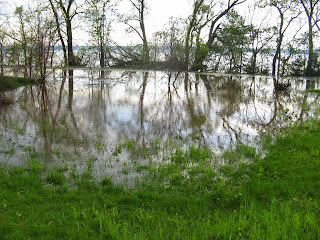 The people trying to drive on the road on the other side of this sudden lake were not so happy. 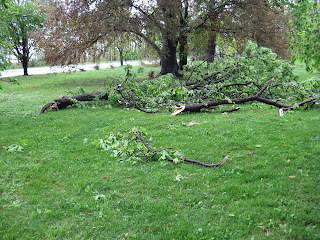 The top quarter of a horse chestnut tree by the driveway snapped off. 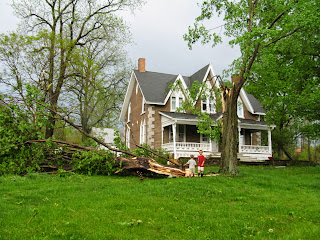 And three-quarters of the maple tree near the north corner of the front porch twisted right off. I cannot express how grateful we are that it did not land on the porch. 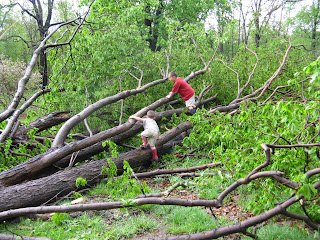 It makes a wonderful jungle gym.

We were without power for about eight hours and without cable and Internet capabilities until this afternoon. We have one hell of a mess to clean up out there, and it will take us many, many hours.

No one was injured. The house sustained no damage. Nothing fell across the bottom part of the driveway, so access to the house hasn't been blocked.

And we have a really good start on next winter's firewood.

This Mother's Day, Say It With Pork

This was a very strange morning. Jack was up at 5:15, and didn't go back to sleep until 7 a.m. Charlie was pounding on the downstairs door at 6:20 a.m., as usual, so A. got up with him. I went back to sleep when Jack did at 7--in celebration of Mother's Day and my opportunity to lounge in bed--and when I got up at 8, Cubby was still asleep.

Cubby didn't wake up until almost 9 a.m., and I heard him thumping around upstairs before he appeared downstairs. He informed me I should go upstairs to look at his bed, because I would be very surprised.

He had made his bed, with no prompting or suggestion ever that he should be making his bed in the morning. Bed-making has never been a huge concern for me, so I haven't really been showing them how or insisting they do it. But I guess he just saw me making mine and decided to do it too.

So that was a nice Mother's Day present.

And then A. made crepes for breakfast, which is always appreciated.

But most exciting, we have a pig in the freezer.

The MiL decided--for what reason, I am not sure--that she wanted to start raising heritage Large Black Hogs with her brother the farmer. So she's been supplying the funds and the feed and so on, and he's been taking care of them on the farm. The first of the piglets were born this past winter and just got to slaughter weight. Our pig was butchered last week and was ready to pick up yesterday.

The slaughterhouse called at 9 a.m. yesterday to let us know we could come get our meat, and A. was in the car half an hour later to go pick it up.

I am really, really sick of buying meat a little at a time. I was definitely ready to have a whole freezer full again.

And now we do. A couple hundred pounds of literally the best pork I have ever eaten is now at hand. Hooray.

As for celebrating Mother's Day in any traditional way . . . well, no. Jack is too small for me to leave him for more than a couple of hours--due to the fact that I'm his sole source of sustenance--so I won't be going anywhere. I did mentally refuse to do laundry today, which means I dressed Charlie in dirty clothes from the basket in the downstairs bathroom.

Whatever. They just get dirty within the hour anyway. I should do this every day.

A. might take the older two fishing. I might go into the village to get some ice cream or something by myself later. But that's pretty much it for us.

And in closing, let me just wish the happiest Mother's Day to my own amazing mother, who I wish was close enough to come over for some pork chops today. Oh well. Arizona to New York is a little far to travel for pork, even if it is heritage. So I'll just raise my own pork chop in a salute to you, Mom.

And isn't that just a fitting Mother's Day salute from your weird countrified daughter? Yup. But heartfelt, nonetheless.