Tomorrow morning, my mother, the children's beloved Nana, will be boarding a plane and traveling from Arizona to our northern frontier. She's staying for a couple of weeks to help out during and after the birth of Baby #4.

So how did she prepare for her long and arduous journey? By competing in a triathlon today. 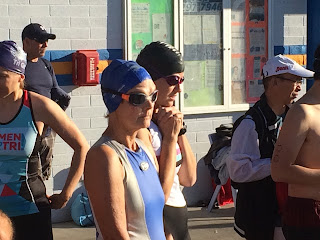 My dad was kind enough to send periodic photos and updates as she competed. She finished just a little while ago. The video he sent of her crossing the finish line shows Nana waving her hands in triumph as she jogs steadily across the finish line.

I'm sure that spirit and endurance can carry her through two weeks sleeping on a fold-out couch in the playroom and dealing with three insane little boys day in and day out. I think the triathlon was probably the easier of the two.

I can only hope to be as bad ass as my mom someday. It's nice to have a role model. (Though the odds of me doing a triathlon at 70 years of age--or, um, ever--are virtually non-existent, so I suppose it's a forlorn hope.)

Congratulations, Nana! See you soon! I have lots of ibuprofen on hand.


Last year when Cubby started first grade at his new school here, I found his homecoming at the end of the school day to be incredibly stressful. A. was gone a lot then--and even when he wasn't away from the house, he was still working at 3 p.m. when the bus came--so it was just me and the three children.

Charlie and Jack were excited to see Cubby and were usually a little hysterical. Cubby wanted to tell me all about his day, which was kind of hard to do with his two little brothers screaming and racing around. Then he had homework for the first time, which he was not accustomed to, needed help with, found frustrating, and was greatly complicated by the fact that his brothers were constantly bugging him, stealing his pencil, etc.

Later, he had to read a book aloud to me, which was also complicated by his small, pesky brothers and the fact that he really couldn't read very well yet and would get frustrated.

It was not a good scene.

By the time Charlie started school in January, things had somewhat calmed down. But still, their arrival home meant backpacks flung about with papers and lunch bags to be unloaded, winter clothes all over the floor, two children trying to talk over each other to tell me about their days, and a still-somewhat-hysterical Jack.

I was determined this year would be different. To that end, we began after-school training immediately upon the commencement of the school year.

Instruction #1 is to take their lunch bags out of their backpacks and put the bags in the kitchen. One or both of them usually has something left in their lunch bags, which they give to Jack. He finds this thrilling--because what's better than cheese that's been sitting in a school lunch bag all day?--and it distracts him during Instruction #2: Folders out of their backpacks to show me what's in them, thereby giving them each a turn to talk to me.

All of this still requires a lot of reminding--a.k.a., nagging--but they're mostly used to doing these things themselves by now.

Finally, Cubby does his homework. He still always wants to do it as soon as he gets home, but he no longer requires my assistance. First he does his math worksheet. I look it over and point out to him the ones he might want to, ahem, "reconsider," though he usually gets most of them right the first time.

Then he reads his assigned book. This is my favorite part, because not only can he now read on his own, he can read to his brothers. 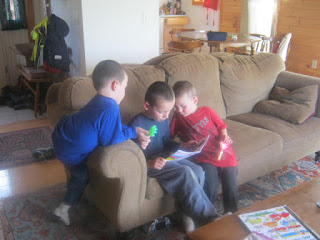 Of course, any day now we'll be adding a newborn baby to this mix, thereby blowing all routines to hell, but I have hope that at least some of this will stick and there will be a minimum of chaos upon the school homecoming. Fingers crossed.


I figured after that last post I shouldn't let too many days go by without a post or everyone is going to think I'm at the hospital having a baby.

But I did take all three ex-utero children to get a flu shot this morning. No one cried. Mostly because A. came with me and held Jack during his shot. Daddy can make anything bearable.

Right after that, we took them all to the dentist so the older two could get their regularly scheduled cleanings.

Checking off all those responsible-parent boxes, you know.

Except for the fact that the pediatrician's office has lollipops, which of course all three boys took, and I managed to convince Cubby and Charlie to hold off on theirs since, you know, they were going directly to the dentist to get their teeth cleaned, but Jack was all, "What? No. I want my lollipop NOW."*

So he was sucking on a lollipop in the dentist's office. At 9:30 in the morning.

However, neither Cubby nor Charlie had any cavities or other dental concerns, so I'm gonna call it a draw.

After that, we went straight to the school to drop them off for the last few hours of their day.

In about an hour, I have to drive back to the big village (for a grand total of 100 miles of driving today--whee) for my own medical appointment: the weekly status check on the baby.

So if you don't hear from me for several days after this, perhaps I really did go to the hospital to have the baby. Or perhaps I'm just lazy and feeling too stupefied to write anything worth reading.

* I hope you appreciated that one run-on sentence made up a full paragraph. It's a talent, really.

Labels: all about me, baby stuff, Charlie, Cubby, family, Jack, randomness, the A team

Eyes on the Prize


Okay. It's October 1. That means I am having a baby this month. Probably earlier rather than later, too.

Sounds good to me. The exciting glow of pregnancy--if such a thing exists--has now changed to "I feel fine. Thanks for asking."

Bring on the nursing and diapers and sleepless nights. In other words, bring on the baby.
Posted by Kristin @ Going Country at 6:47 PM 2 comments: