I have a new routine on Friday afternoons: When Jack wakes up from his nap, we all have a snack and then we go to the library around 3 p.m. It's a teeeeeeny, tiny library, but it does have a lot of little stuffed animal puppets, a lot of building sets, and a computer just for kids. I follow Jack around the library as he practices his walking and talks unintelligibly with the librarian. Cubby and Charlie play with the computer or build things or fight (quietly--indoor library voices, kids!) with the stuffed animal puppets.

And then--the key component of the library adventure--I check out a DVD* for Cubby and Charlie and we leave by 4:30 p.m.

The timing is important, because when we get home I unload all the library books, hand out a carrot or a cucumber spear** per child, put on the DVD and . . . why, would you look at that! It's 4:45 p.m.! That's cocktail time! And I have three occupied children!

Totally not a coincidence, obviously.

A lot of planning goes into my being able to sit down and have an uninterrupted Sidecar or gin and lime. In addition to the above, I have to come up with a make-ahead dinner so I'm not cooking at 5 p.m. And even then, it doesn't always work. Jack is the wildcard. Sometimes he fusses and turns the TV off and on or throws things on Cubby's and Charlie's chairs or generally ruins our peaceful scene by being, well, a one-year-old.

But if I'm lucky? Well, if I'm lucky, Jack is happy with his raw vegetable and it's just me, my gin, and a book.

* Today it was a National Geographic documentary about the animals of the Serengeti. Yes, I am That Mom who checks out documentaries for her children.

** Again being That Mom, handing out raw vegetables. I don't know who I am, either. The most unfun mom ever, apparently.

Labels: all about me, Charlie, confessions, Cubby, Jack, randomness

The Metamorphosis Is Complete

Just in case I wasn't convinced that I have definitely become a Housewife with a capital "H," I clinched the title by making tuna loaf for dinner last night.

Yes. Tuna loaf. Apparently I'm not just a Housewife, but a Housewife who has time-traveled from the 1950s.

There is no denying the ease of the tuna loaf, and that's the main reason I made it. I like tuna patties, which are just a mixture of canned tuna, breadcrumbs, mayonnaise, mustard, and some eggs, fried in a little oil. But the frying is the difficulty now. Not only because I can't be standing at the stove monitoring anything in hot oil at 5:45 while also refereeing Cubby and Charlie's nightly war games and keeping Jack from burning himself on the woodstove or falling off a chair or something similarly one-year-old-specific, but because I can't even fit all the patties I would need to make in a skillet. Or even in two skillets.

When feeding six people, at least one of whom (A.) eats enough to be considered two people, individual patties of anything that can't be cooked en masse under the oven broiler just aren't feasible anymore.

I had already made the tuna mixture though, so I decided to just dump it all in a loaf pan and bake it. I didn't really know this was an actual thing other than laziness, but apparently, it is. It's a tuna loaf. Also, I could make baked potatoes with it, which was the lazy way out of the mashed potatoes I had originally planned on making.

I was kind of embarrassed to serve the tuna loaf--I mean, tuna loaf just doesn't sound at all appetizing--but not enough to not do it.

As we were eating, A. asked me, "So what inspired you to make tuna loaf? It's good, but I'm pretty sure it hasn't been made in the 21st century yet."

I told him about the lure of convenience and kind of apologized, at which point every single person at the table informed me that they loved the tuna loaf. Even Charlie, who doesn't love anything except ice cream.

Jack didn't say he loved it, but only because he can't talk and he was too busy cramming it in his mouth with both hands.

A. did say that while he enjoyed it once he started eating, his original reaction was, "Damn, that's a tuna loaf." And I must admit that tuna loaf just sounds like the punchline to a joke about bad food.

Whatever. Everyone ate it, I didn't have to stand over hot oil with a baby crawling around my feet, and it made enough for leftovers.

Next time I should make it while swilling gin and wearing pearls, right? Right.

Labels: all about me, confessions, fun with food, the A team

And Now For My Penance

I walked in the door at 12:06 p.m., just back from picking up Charlie at preschool in the village, to find a message on our answering machine* from Cubby's great-aunt/school principal that he had an earache and was lying down at school waiting for me to pick him up. So I buckled Charlie and Jack back into their car seats and went right back to the village to pick up Cubby from school.

I had mom-guilt-induced visions of finding him crying in the fetal position when I got there, with the accusing glares of his teacher following me out of the school as I carried his limp form to the car.

In the event, Cubby was sitting with his classmates doing a math game when I got there. His teacher didn't bother glaring at me, probably because she was too busy and it was pretty obvious Cubby was not in any imminent danger of rupturing an eardrum or something. I still took him home and put him on the couch with his beloved heated-up sheep pillow thing. He then alternated whining about his ear hurting and bathroom talk**.

It's really fun to listen to, as you may imagine.

His ear does hurt, obviously, though just as obviously it's not bad enough to distract him from his customary gross refrain.

So that's what I have to look forward to today. Fingers crossed he's entirely recovered tomorrow, for all of our sakes.

** An example: I told him Grandma only had one bathroom in her house growing up, for six kids and two adults. His response, "Well, I guess if the kids had to go to the bathroom, they just pooped on each other's heads." I told him that was inappropriate and to knock it off. His response, "Well, if you don't like that, they could poop on each other's noses." Seriously, dude? SERIOUSLY?

Labels: all about me, confessions, Cubby, school

Get You Gone, Son

In addition to the pinkeye (which has miraculously not manifested in anyone else . . . yet), Cubby also had a fairly nasty cold that put him out of commission yesterday. Fever, naps on the couch, the whole bit. He was already home with the pinkeye, so it was just the icing on the cake. If the cake is an oozing, snotty pile of infectious diseases.

Yum. Who wants some infectious cake?

He was most definitely not in any shape for school yesterday. This morning when he got up, he seemed a bit wilted, though he had no fever and his eye looked totally recovered. Still, I thought he seemed tired and maybe could do with another day of rest.

Then he woke up all the way.

After a full ten minutes of annoying voices from him at breakfast, in addition to the usual talk of smelly bottoms and poo-poo gas (this is never-ending and incredibly annoying), plus some menacing of Charlie's stuffed sheep and two episodes of being sent to his room, I decided he was ready to go to school.

Or maybe I was ready to have him go to school. Whatever. The end result is the same: He's at school. Charlie is at school. Jack is asleep. And I have five million dishes to wash.

Peace out.
Posted by Kristin @ Going Country at 7:10 AM No comments:

So Cute, But So Contagious

Yesterday afternoon, Cubby and Charlie both fell asleep on the couch like this: 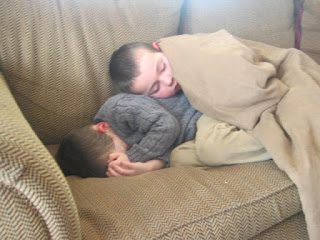 It's not unheard-of for Charlie to still take a nap if the occasion presents itself in the afternoon, but Cubby never does unless he's sick. He's had a slight cold, so I figured that was why he fell asleep.

When he woke up, however, it became quite obvious that he also has pinkeye.

He told me last week that his friend at school had it, so I was half-expecting this to happen. It is, of course, terribly contagious. This means he is not at school today, and I have to haul him plus his two brothers to the doctor to get him some medicine.

Anyone want to lay bets on how long before Cubby's little pillow up there starts oozing from the eyes?

Stay tuned for the dramatic plot twists, my lovelies.