The Rewards of Hard Labor

A. and I spent some time yesterday covering the potatoes with sheep-shit straw.  And yes, I did actually engage in some of the activity this time, with a pitchfork and everything.  Besides the suitably covered and shitty--I mean, fertilized--potatoes, which I must assume will grow and then reward me ultimately with my beloved french fries, I got a bonus reward.

The pile of straw was partially covering a pallet A. had propped up against the stone wall to protect the newly-planted grapevine there from the avalanche of manure.  As I forked the straw away, I uncovered the leaning pallet.  And what did I discover in that little cave of shit-straw-covered pallet?  Only a new chicken nest holding a full dozen eggs.

I knew those hens had been stealing away somewhere new to lay their eggs.  Those tricky chickies.

The bad news is that now that I've found and disturbed this nest, they will be wandering around to find another place to lay.  Another place that I must then discover, probably by accident in this way.  Unless the dogs get there first.

Oh well.  At least I got my dozen eggs yesterday.  Who knows what surprises today might hold?  You just never do know at Blackrock.
Posted by Kristin @ Going Country at 4:47 AM 3 comments:

Well! It seems that though the past few days have been a blur of hacking coughing, bleary consciousness, and general misery, there appeared to be quite a few photos that made it onto the camera. Probably because there was an awful lot going on.
There was the general labor. 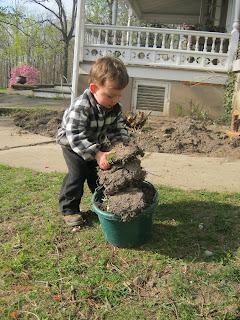 General and pointless, as we really did not need enormous chunks of dirt in this bucket. But it kept Cubby entertained for a good five minutes while I sat drooling and half-awake in a chair on the lawn, so it's a useful activity from my viewpoint.
The sheep have been laboring, too, in the literal and somewhat bloody sense. 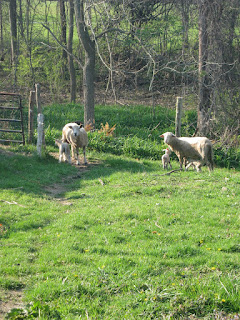 LAAAAMBS!!! Kind of far away lambs, since their mothers are not too keen on close-up interaction with their precious young yet.
The first one to go, the Merino, needed milking out a couple of times to give to the lambs in bottles. Both to get the lambs going and to relieve her obviously swollen udder so she would allow them to nurse. Something about the configuration of the teats on the Merinos makes this almost routine for that breed. The Cotswolds rarely need assistance. So far three ewes have given birth, bringing the current lamb count to four--two boys, two girls--and ten sheep yet to have their lambs.
And then, since nothing goes better with leg of lamb than potatoes, we planted some potatoes: 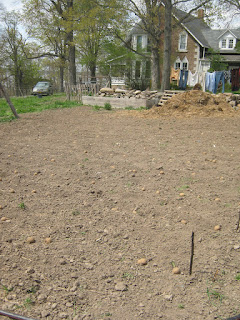 I'm sorry, was it in poor taste to refer to eating the lambs immediately after their birth? Too bad. Such is life in the country. Oh, and see my potatoes up there? WHEE!
In a marked contrast to last year, the potato field was prepped with the tiller this year. Which means it was done by A. He also hoed out some shallow rows and dropped the potatoes in at their appropriate intervals. So, basically, he did all the work. And you know what? I am TOTALLY OKAY WITH THAT. We're trying the mulching method this year, since I'm definitely not going to be doing any hilling in my current useless state. So the potatoes will sit out for a couple of days to green up and sprout some more, then A. will cover them in that sheep-shit straw he hauled to the garden last weekend.
Are you getting the idea that all the labors we're discussing here involve A.? You're pretty much right. I did manage to transplant my tomato seedlings yesterday by myself: 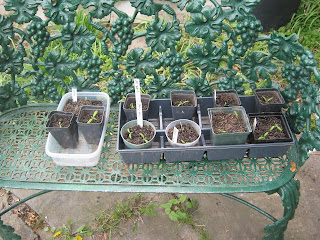 Hello, my lovelies.
But then here comes A. again to paint the shed roof and show me up as the lazy lump that I am: 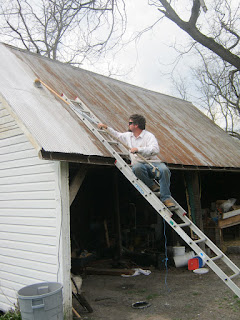 Does this look like fun? Yeah? Well, it's not. Or so I hear.
That's a metal roof, probably about fifty years old. It's supposed to be painted in a latex covering every ten years or so. A. thinks it was last done at least fifteen years ago, so it was pretty rusted and way past due.
And then we went to get hot dogs and ice cream at the seasonal ice cream stand for dinner because I was obviously WAY too tired after all my picture taking to make dinner. Also, I wanted some ice cream.
So that brings us up to date as of now. Stay tuned for more lambs, more garden stuff, and more fun from Blackrock.
Posted by Kristin @ Going Country at 3:59 AM 7 comments:

You will have to excuse my continued absence here for a little while, duckies, as I try to recover from The Worst Cold in the History of All Colds Ever, Please Help Me Jesus.
It's been an ugly couple of days and I've been in strictly survival mode. But I feel better this morning than I did yesterday morning--that is, at least I feel human--and so I must hope that tomorrow I'll feel better still.
So maybe tomorrow I can tell you all about the lambs that keep coming and the potatoes that got planted and everything else that continues to march on despite my own personal small miseries.
Until tomorrow . . .
Posted by Kristin @ Going Country at 4:00 AM 8 comments:

About five minutes ago, I had just gotten my coffee and was sitting down to waste some time online before the little dictator awakened and began dictating when the cats started going nuts. Well, the Devil Cat did, anyway, racing around the downstairs and generally behaving like an irritating pain in the ass. Not that this is unusual for her, but the old cat was being kind of weird. I could hear him sort of growling at her, which he doesn't usually bother with.
Then I heard the squeaking. Right at my feet, which were under the dining room table. The cats were under the table, and apparently, so was a mouse. When I leaned under the table, I could see the Devil Cat was holding a mouse in her mouth. A very much alive mouse that I very much wanted to get out of the house. But when I opened the door to try to get her and the mouse outside, not only did she not go out, but the dogs wanted to come in.
I could imagine the scene if I allowed them inside, so I closed the door.
Then the cat let the mouse go. Then she caught it again. And let it go again. It was pretty clear by now that she was not going to kill the damned thing for me--thereby definitely confirming that she is a totally useless cat and not worth the kibble we feed her--so I got a dog bowl to try to trap the mouse myself. Except it had wedged itself among the shoes by the door, so I couldn't get the bowl down flat and it wiggled out.
So. At this very moment I am sitting in my dining room with two completely useless cats and a no-doubt terrified mouse cowering behind the enormous crock in the corner. That's just swell.
What's happening right now where you are, duckies?
P.S. It occurred to me that if I were on Twitter I could have posted some pithy little Tweet like, "Cat has mouse cornered in dining room. What now?" and you would have all been spared several paragraphs about essentially nothing. But I feel Twitter really doesn't have the scope to capture life at Blackrock. And anyway, I don't have an account.
Edited to add: Stop the presses! The first lambs of the year have been born, as I discovered a few minutes ago when I went outside to check on the Merino that A. was pretty sure was ready to lamb last night. When I got up to the pasture, I saw that she had two lambs, already on their feet and apparently nursing. Since the Merinos are pretty wild and skittish, I left her alone and came inside to call the shepherd. I'm sure the rest of the lambs will follow in quick succession. Along with hand milking for the ones having trouble nursing and tail docking and all the other fun that comes with lambs.
Posted by Kristin @ Going Country at 4:14 AM 10 comments:

But First, We Went Fishing

There was indeed work accomplished yesterday in the form of moving two huge truckloads of sheep-shit straw from the barn to the garden. This was accomplished by A., while I sat on my gestating ass and kept him company. That's about all I'm good for when it comes to manual labor these days. But before that, A. wanted the whole happy family to go fishing at a pond up in the hills.
I do not fish. I long ago ceased accompanying A. on his fishing expeditions. So I think A. gets great enjoyment out of the fact that I am once again forced to tag along on fishing trips. Cubby isn't quite old enough to actually fish with A., so my presence is required to chase after the boy while his father does the actual fishing. Cubby spent about ten minutes whacking the water with the top section of a fishing pole before finding a fun log to balance on and steep hills to climb and berries to inspect.
A. didn't catch anything, but it didn't matter. They both had a good time.
Then there was the moving of the shitty straw and A. fixed some gutters and today was the MiL's birthday so I made her some duck-egg custard and lamb curry.
What? So it's not the most traditional of birthday foods, but that's what she asked for. Well, she asked for the custard; the curry was my own idea. It was really good, though.
Tomorrow it's supposed to be 83 degrees. What the hell? I don't know. But I do appreciate not having to haul wood for the woodstove for awhile. I am not, however, so foolish as to think we are done with the woodstove for the season. I don't totally rule out woodstoving until about June. So I'll take advantage of this warm period to clean the ashes out of it in preparation for the next round of wood burning.
And here I will finish a completely random and disjointed collection of nonsense, with a completely random closing. The end.
Posted by Kristin @ Going Country at 5:42 PM 3 comments: