When heavy machinery does the plowing after a monster snowstorm, the result is some monster piles of snow. Mountains, really. 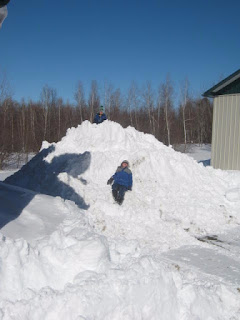 A. helped Cubby dig out a snow cave at the base of this mountain. 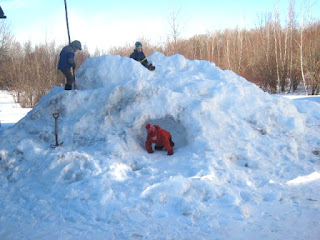 And then Cubby added a drop-down hole from the top. 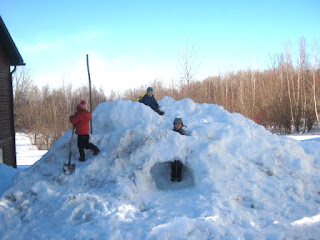 Their continuous climbing on it has resulted in paths along the sides and a flattened place on the top from which to survey their domain. And blow bubbles.

Every child's dream, right there next to the house.


Great. That means I can banish the dog to the barn at night. Alleluia.

See, there are many coyotes here. Many, many coyotes, who run the woods freely at night, yipping and howling and generally making their presence known. Now Mia, who is normally the most mild-mannered of dogs, absolutely loathes coyotes. In her younger days, when she was part of a pack, she would actually hunt them. Now that she's old and crippled, and also has no pack except us useless humans, all she can do is bark.

So she does. Any time she hears the coyotes. Which is all. night. long.

I can't really blame her. I mean, there are howling wild beasts out there. She's a dog. She alerts us to their presence. Not that we need alerting. The damned things are often so close they wake us up.

If she's in A.'s garage office at night, which is her customary bedroom, it keeps us awake because the garage shares a wall with our room. It's also right over Jack's room. No good.

If she's outside, she stands on the front porch to bark, which is about twenty feet from our bedroom, and so, of course, it keeps us awake.

If she's in the house, she barks anyway, which of course wakes everyone up. And then we have to let her out to run around and bark until she's cold and tired or the coyotes move along.

This has been making for some bad nights for me and A. Really bad nights.

So last night, after a remarkably warm day, and when I realized it was going to be above freezing all night long, I hauled her bed and water bowl out to the barn and shut her in there for the night. The barn is far enough away that if she did bark, we wouldn't hear her. It's entirely insulated and enclosed, though not warm enough if the weather stays below freezing for awhile.

But last night? To the barn you go, Mia. I hope you enjoy your night. We certainly will.

Of course, "spring" doesn't mean the same thing here that it does in many places, so it's going to be three degrees tomorrow night. Which means Mia will be in the house again. I can only hope the coyotes play elsewhere.

Labels: all about me, country livin', dogs, the great white north, wildlife 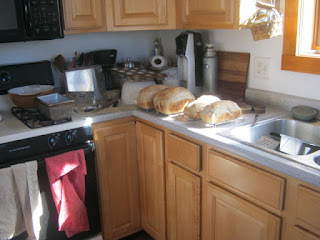 Four loaves of bread, twenty-four cupcakes, a Spanish tortilla in the oven, some clean dishes, and some dirty.