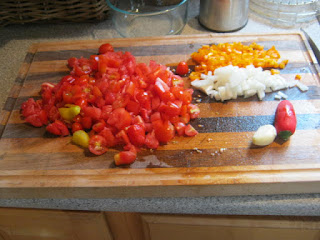 Now, I am of the firm opinion that salsa must be diced finely so you don't end up with enormous chunks of peppers or, God forbid, onion on your chip. And to do that dicing, you must have a large cutting board so the various ingredients aren't falling off the edge of the cutting board.

So annoying. Good thing my dad made me that nice big cutting board there.

Another thing to love? A. has started carving me kitchen utensils out of birch wood. 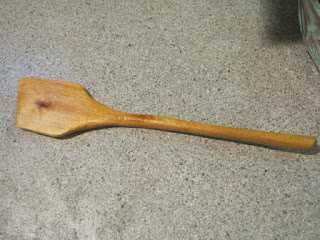 This shape would not have occurred to me to request, but it's amazingly useful for scraping the bottom of pots.

My next request is a very sturdy spoon for mixing up bread dough. I already broke one of the cheap, flimsy wooden spoons that were already in the house. Oops. A.'s on it, though.

Happy beginning of the holiday weekend, my lovelies! My plans include chips and salsa and a Sidecar. I hope your weekend is similarly exciting. (And if those plans don't sound exciting to you, well, then you're obviously not in constant company with three small boys day in and day out. It tends to lower the standards for excitement.)

Labels: all about me, domesticity, fun with food, the A team, The Tomato Crazy


As as become our habit after dinner, we set off on our walk towards the dirt road. Helps to get the crazies out in the open air, you know.

It was particularly necessary today, after a day of intermittent rain and thunder. Unfortunately, we hadn't even gotten out of the driveway before I heard some far-off thunder and I decided we'd better not get too far from the house in case there was another storm. So I decreed we would have a race to the apple tree down the road and back.

Yes, the road we live on is so quiet I can let my small children race down the center of it as if it were their own personal speedway. The boonies have their benefits.

Charlie, who loves to run, took off, with Jack pistoning his little legs madly in his wake. Cubby, who was being a little sulky, declined to run. But then, as soon as Charlie had reached the apple tree and was almost back, Cubby turned on his heel and raced back to me--the Mommy Finish Line--just ahead of Charlie.

"Charlie wins, because Cubby cheated," I announced. After all, the race was to the apple tree and back.

Cubby turned to me indignantly and said, "Mom! I wasn't cheating! I was using tactics."

Sure, kid. Tell it to the judge.

(Really, though. Tactics. Who does he think he is, General Patton?)


Anyone else feel a great sense of calm and contentment after a trip to the library results in half a dozen books to read? I always feel anxious when I don't have new books on hand. Not that I don't have my own books, of course, but I've read all those so many times that if I run out of new books, I'll pick up one of my old ones just to read something, knowing I can abandon it halfway through if I get new books before I finish it.

Of course, of the six books I got at the library today, I may only like and actually finish one or two, but there's always the exciting possibility of a 100% success rate in that bag. I could have hours of good entertainment, all for free.

Also, two new DVDs for the kids, which means they are currently completely quiet and content as they watch "Peppa Pig." Happiness all around, and all thanks to the public library.

Labels: all about me, confessions, country wisdom

One hour to roast and puree the tomato sauce . . .

Twenty minutes to grate the mozzarella cheese* and slice mushrooms and bell peppers . . . 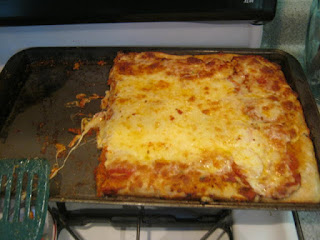 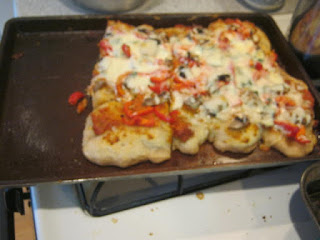 It's a long way from Papa John's delivery, but worth the wait for sure.

* At least I wasn't making my own mozzarella and pepperoni. Though I don't rule out any crazy kitchen preparations anymore.
Posted by Kristin @ Going Country at 5:38 PM 6 comments:

Labels: all about me, domesticity, fun with food, The Tomato Crazy
Newer Posts Older Posts Home
Subscribe to: Posts (Atom)