Long version: I had extra cheese sauce still from when I made the cheesy potatoes a few days previously, and a bunch of already-cooked rice, so I made a skillet meal with those, plus a can of tuna, onion, mayonnaise, and green peas. Sort of like tuna-noodle casserole, but in a skillet and with rice.

It was very pale and creamy. Not much to look at, but it tasted pretty good. Everyone liked it.

And to continue my inadvertent "Fridays are for eggs" theme, I had a couple of fried eggs with leftover calabacita vegetables.

Long version: Still working my way through the roasted green chilis we froze last fall so I can start using the multiple bags given to me by Miss Amelia. It was only about 80 degrees this day, so I could get away with soup. And I used one of the multiple containers of frozen sheep stock that's been in the freezer since we butchered the wether in the spring, so that was nice.

I don't know what it is about those roasted chilis, but they make anything with meat waaaay better than you would think. Are they like mushrooms? Is there an element of umami there? Has anyone studied this? I would legitimately like to know.

Long version: It was another day over 90 degrees, so I cooked the chicken--fully frozen legs, just simmered in salted water until I could pull the meat off--intending to make chicken salad. But when I pulled the chicken out of the pot to begin shredding it, the meat was still warm. And I had a bowl of tomatoes on the counter. And a head of already-roasted garlic in the refrigerator. And basil in the garden. And already-shredded asadero in the freezer.

So I made a pasta sauce instead and put the chicken in that.

The box of pasta I cooked for the kids were these tiny elbow shapes, and let me tell you, with those small shapes, there is a LOT of pasta packed into a pretty small box. I had way more pasta in the pot than I was expecting, and not enough chicken and sauce. So to the pasta I also added a couple of cubes of garlic scape pesto, some butter, and a little half and half.

A. and I had our chicken with sauteed calabacita/onion/tomato/garlic. Is it getting old? Never.

The pudding was actually two packets of instant chocolate pudding that was in a box of food given to us by the guy who runs the tiny store in the village. One of the elderly residents of the village gave it to him because that person couldn't use it all. He's a single guy, so he passed it along to us. This happens literally almost every week now. If it takes a village to raise (and feed) a child, we are in the right place.

Anyway. I forgot all about the pudding, but Cubby didn't. As soon as we got home from church, he announced that he would make Sunday dessert. After perusing cookbooks, and hearing Jack's announcement that he was tired of cookies (say what?), Cubby decided to make the pudding. Being instant, it literally took two minutes to mix and put in the refrigerator.

I admit I was a bit skeptical of it, but it was really pretty good. The texture was thinner than homemade, but the taste was more chocolate-y than I was expecting. And it sure was convenient. Especially because I didn't have to stand at the stove stirring pudding for 45 minutes.

Long version: Yup, there's those convenient and slightly unwholesome chicken patties again. What can I say? It was a work day. I was tired.

The watermelon was one of our Moon and Stars ones. It was good. Not great, but pretty good. 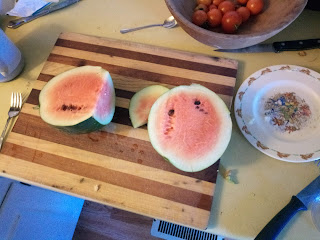 Long version: These were more of the par-cooked and frozen roasted potatoes that I just finished roasting from frozen for about twenty minutes in the oven.

The salad was very satisfying. The lettuce, tomatoes, and carrots in it all came from the garden, as did the dried dill weed in the ranch dressing. Cubby's lettuce was appreciated by all.

Long version: I saved just enough of the ground beef from Tuesday to make a few sliders. A. and I ate most of those, while the kids went for the pasta. Of course.

Long version: Miss Amelia gave us a pork loin roast, which I cut into chops. My last batch of yogurt turned out very thin--don't know why; the next batch was normal--and I had about a cup of that left. So I used it to make a marinade with salt, pepper, garlic powder, and paprika. Then I just fried the pork at dinnertime. It came out pretty well.

Oh, and here's a photo of A.'s garlic before he harvested it. 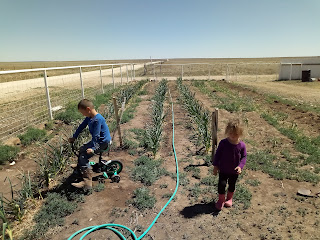 With some feral children just for fun. Someone give that girl a haircut. Oh wait. Someone did.

The First Haircut is a classic example of what happens the more children a person has. Let me offer my own children for illustration.

Cubby the Firstborn's first haircut was at an actual salon. He wore a little cape with colorful frogs on it; I took a picture; and I paid ten dollars for the experience.

Charlie the Second Born's first haircut was in the bathtub when I noticed his hair when wet was entirely too long. No cape, no photos of the event, although I did get a couple of photos of his hair after it was done.

I have no recollection whatsoever of Jack the Third Born's first haircut. Definitely no photos, no post, not even any memory of it.

Then there's Poppy the Fourth Born's first haircut. I have a picture of it, but only because it happened in our kitchen and because A. was her stylist. 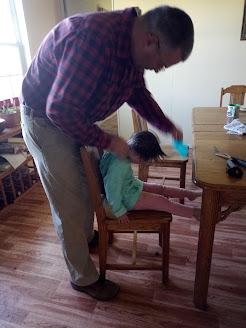 His services are very reasonably priced.

The only reason she got a haircut is because she demanded it after watching A. cut my hair.

I asked him to do this because my hair had gotten really kind of ridiculously long. I usually get it cut about every six months. Last year, that was when we were in New York in the summer, and thus only ten miles from a salon, and when I took my solo trip to a small city overnight in January, and thus had time to myself in close proximity to a salon.

I am not now, however, in close proximity to a salon, nor do I wish to drive 90 miles to get to one. So I asked A. if he could cut my hair.

Now. My hair is long, which is forgiving of, um, slightly irregular haircuts and mistakes, but it is also very curly. The curls are the tricky part. I always ask for layers. So this wasn't a snip straight across the bottom I was asking for.

However, A. is a handy guy who enjoys new challenges, so he did some YouTube research and announced himself ready.

He collected his supplies--a comb, my sewing scissors, and two hair ties--asked me to wet and comb out my hair, and then had me sit in a kitchen chair with my head hanging down, as you see Poppy doing in the above photo.

He had decided it would be best to use the methods for self-cutting curly hair, but to do it for me. This involves combing all the hair over the hanging head and putting it in a ponytail before trimming, then sectioning some off in another ponytail and trimming again for the layering.

There was a third ponytail for a third layer, but it would have made my hair in front too short to pull back, which is a key concern for me. So he just did the two.

It came out well. Poppy's came out even better. A. was very pleased with his handiwork, as he should be, and I am very pleased that I no longer have to try to find a way to drive a hundred miles and pay 30 dollars for a haircut.

So now I cut the boys' hair, A. cuts the girls', and we all live happily ever after.

Labels: all about me, Poppy, the A team
Newer Posts Older Posts Home
Subscribe to: Posts (Atom)