Yes, yes. It's been a few days since I returned from my brief stay in the outside world, so this is far from timely, but I took pictures that I really feel must be shared.

Try to contain your excitement.

I left the house at 9:10 a.m. on Friday morning, driving off down our dirt road with nothing but a large cup of coffee for company. The coffee was necessary because Poppy woke up before 4 a.m. and I had to drive 90 miles.

Unfortunately, the radio doesn't work at all in the Honda, so I had lots of time to think and talk to myself. It's a pretty straightforward drive, though, and thankfully I didn't encounter any of the snow that was moving around that part of the state.

I had some time before check-in when I arrived in the city, so I went to get my hair cut. It had been, um, six months since my last haircut, so it was very overdue.

That little chore taken care of, I got lost trying to find my way to the historic plaza but did eventually make it to the hotel.

It was a very, very nice hotel. It's an old one, built in the 1800s. Its age means that the proportions of the building are old-fashioned and, thus, very pleasing. 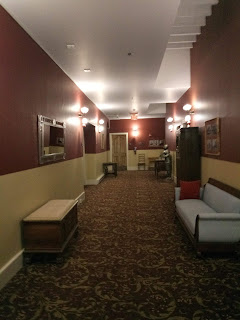 Maybe a bit of a "Shining" vibe, but pretty!

I was most pleased with my room: 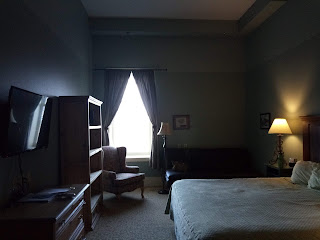 Check out the height of those ceilings. They don't make 'em like that anymore.

There were bookcases full of books all over the hotel, including in my room: 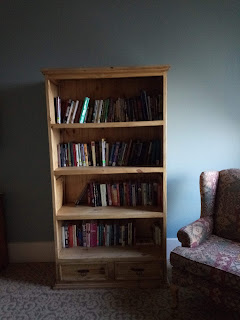 I definitely approve, though I bet housekeeping hates dusting this.

The towels were even folded into decorative flowers. 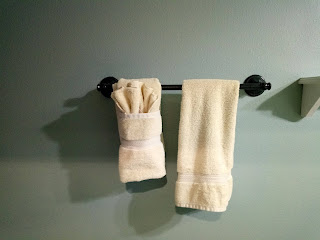 So was the toilet paper, but I didn't get a picture of that.

All the photos I took were in the hotel, which is appropriate, since I basically didn't leave the hotel the whole time. The only exception was a short exploration of the plaza, during which I went across the street to a real bookstore and got a book for each child.

Yeah, I pretty much did nothing. It was glorious.

By the time I checked out around 10 a.m. the next morning, I felt somewhat prepared to take on the wretched Walmart in this city and then head home to re-enter the maelstrom of my household.

It was exactly what I wanted to do. Happy birthday to me.

I would like to stay there, too. The chest in the hallway looks authentically old, and the sofa in the hall looks like it's an original Victorian one, recovered, of course. The style is right, in any case. And bookcases. I looked at the Plaza's menus, and I can tell you right now that I would have ordered something from the chile-laden side of the menu!

Wow, the ceiling in your room...amazing. Thanks for sharing your birthday trip away. Sounds like a restful time. My husband & I are up at 4:30am M-F, so sleeping until 5:30am is sleeping in for us as well.
Linda

I do wonder what you ordered. A reuben and a beer?

Supercool. I applaud this.