Okay, so we're a day early celebrating Jack's month birthday, but when his brothers are absent from the scene and he's awake and not actually eating, we must seize the opportunity to party. We have to wait until his big brothers are out of the picture, because otherwise it goes more like this: 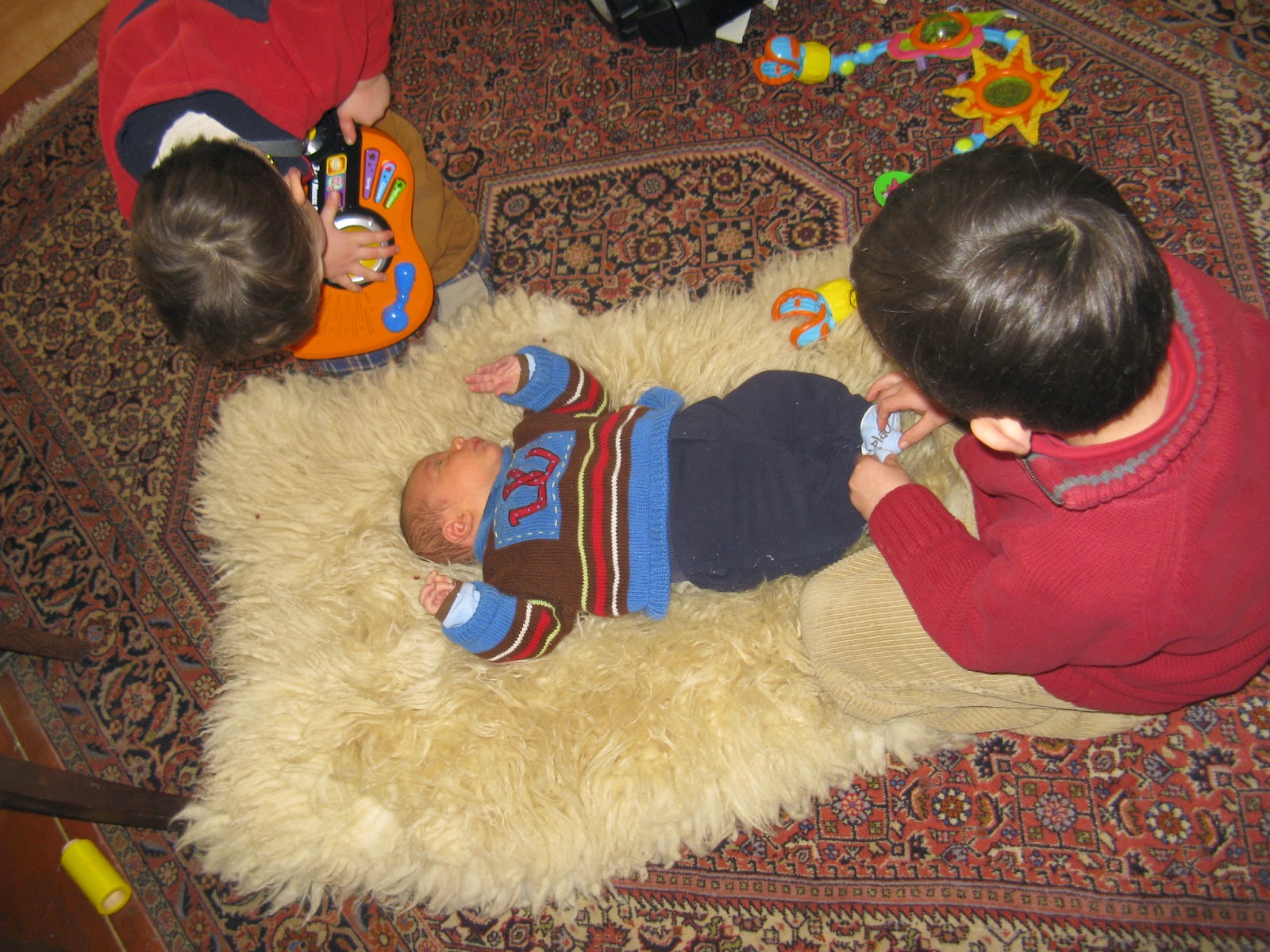 Because a baby on the floor obviously means you must grab his feet or play guitar right over his head.

Just give Jack a few more months--well, give him about 17 more months--and he'll be right there with them, fighting over the guitar and punching in rage at whoever has it.

So much to look forward to.
Posted by Kristin @ Going Country at 1:43 PM 2 comments:

Who's Afraid of Four Degrees Below Zero? 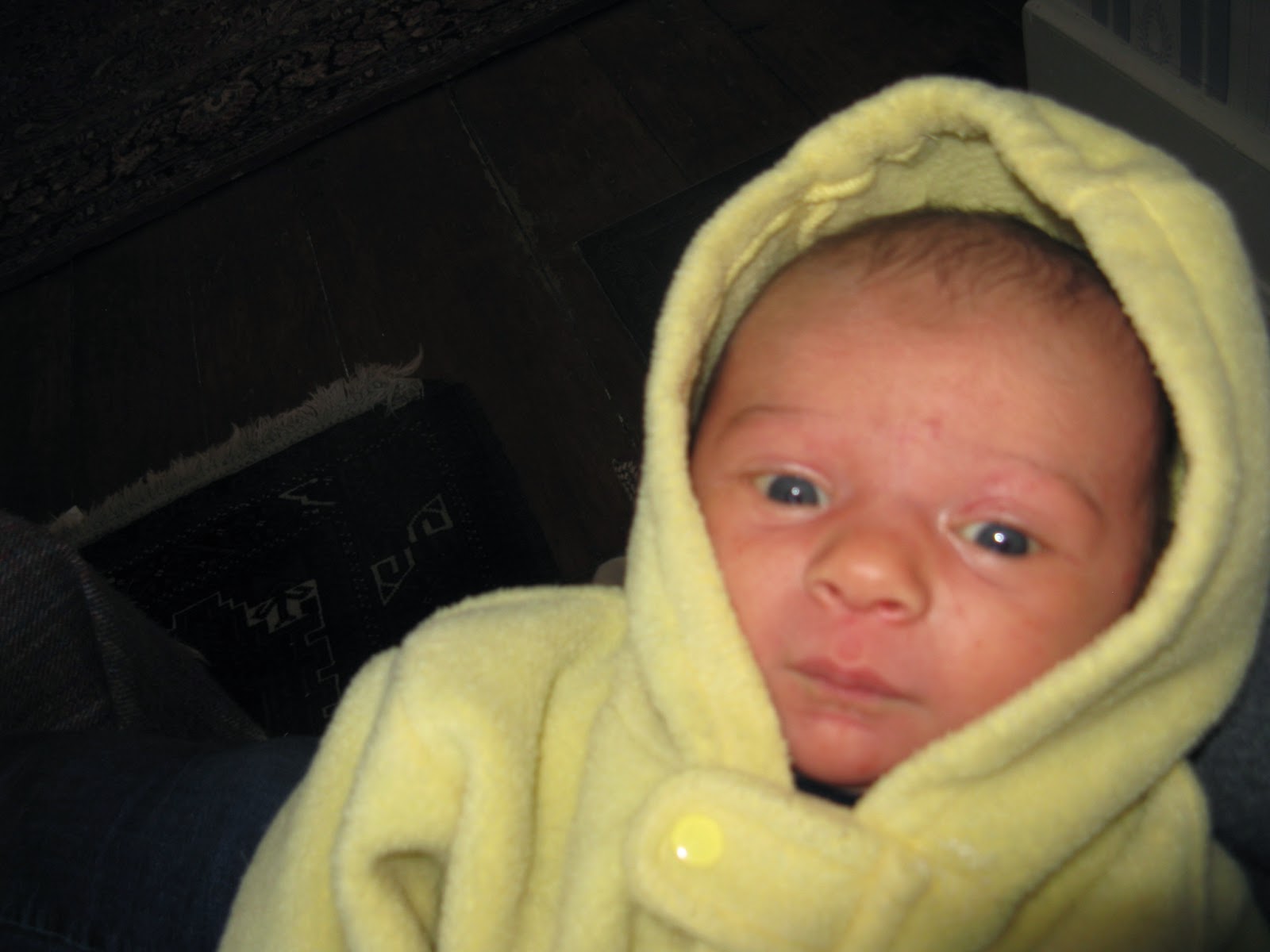 For underneath that babyish hooded fleece suit lies . . . Jack can officially be considered a member of the family now that he's clad in his L.L. Bean long underwear that Grandma wisely gave him for Christmas. The smallest size L.L. Bean sells is 3-6 months, but that's cool, because I specialize in giant infants that never wear sizes correlating to their actual age. Every single member of this family has at least one piece of L.L. Bean long underwear. Including my not-yet-one-month-old baby.

We should totally do an ad campaign for L.L. Bean. We could even include our dog! Except I've never seen anything other than golden retrievers in that catalog, and certainly none of those golden retrievers have ever been photographed chewing on carrion.

So maybe our lifestyle wouldn't exactly appeal to their demographic. But the long underwear sure is nice. Just ask Jack.
Posted by Kristin @ Going Country at 8:33 AM 6 comments:

I have this very nice watch that my mother gave me a year or so ago that I had to stop wearing about four months ago. The catch on it kept coming open and it was very annoying. I thought the catch had just worn out or broken or something. I meant to get it fixed, but the only good watch repair place in the Small City closed a few years ago and getting to the Not-As-Small City to get it fixed was way more hassle than I could handle.

It never occurred to me that maybe the catch on my nice watch stopped closing because my wrists got all swollen and fat because of my wretched pregnancy bloating.

It's embarrassing how long it took me to think of that.

In the meantime, when I was still stupidly assuming that watch was broken, I bought a really cheap watch at Sears and have been wearing that since then.

And THEN, just this week, I've apparently developed some kind of allergy to the back of my cheap watch. I don't know why I just developed this allergy now, after wearing the thing for months, but the red, itchy circles exactly the size and shape of the back of my watch that are now on both wrists are a pretty good indicator of the problem.

So this afternoon I finally dug out my nicer watch that will now stay latched on my no-longer-fat wrists.

Except I forgot that this watch had not been adjusted for the time change in November. So I was going around this afternoon thinking it was an hour later than it was. Then I went in the kitchen and saw that the clocks in there read 2:45 p.m. and there I was, thinking it was 3:45 p.m. and that salvation in the form of A. would be arriving in just a couple of hours.

And now that I've spent way too much time and far too many paragraphs explaining my own idiocy and subsequent crushing disappointment, I'll be going. Have a nice day.
Posted by Kristin @ Going Country at 12:53 PM 1 comment: