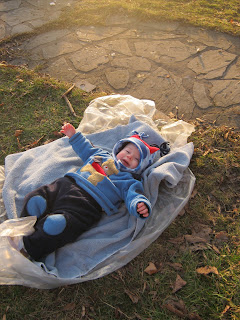 For some (not-nekkid) baby time on the lawn.* 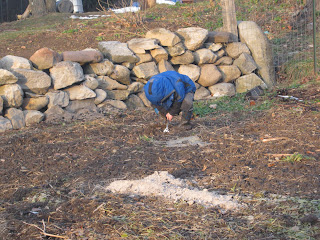 Digging in the muddy dirt. 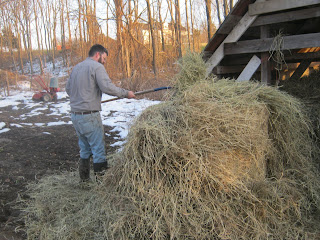 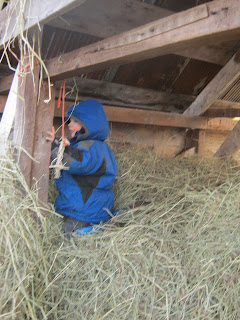 And trampling hay (I trained him well).

It's not exactly summer weather, but we'll take it.

* Yes, that is indeed a garbage bag under a towel that he's lying on.  Classy?  No.  Dry, relatively warm, and conveniently at-hand when I raced outside with him before Cubby was crushed by a 700-pound round bale of hay?  Yup.
Posted by Kristin @ Going Country at 4:17 AM 3 comments: 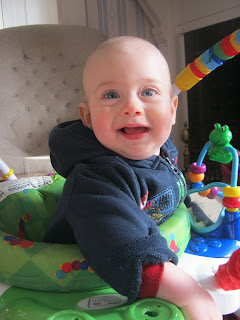 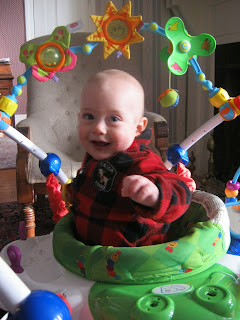 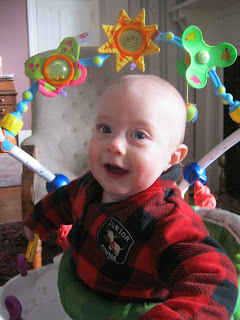 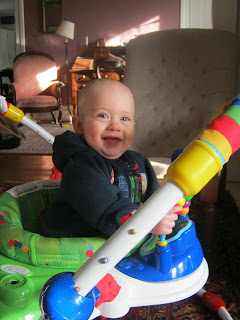 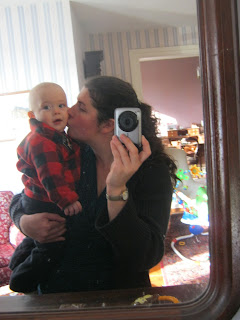 Tool Time with Cubby: How To Fix a Rocket Ship 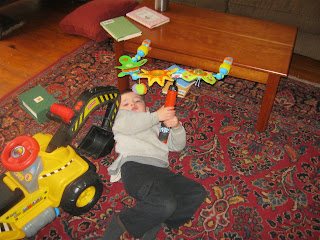 First, make sure you have an indulgent grandfather who sends you a real electric screwdriver for Christmas. 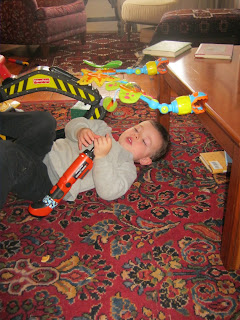 Next, make sure your bit is secure.  Oh, and also check with Mommy to make sure you're not going to screw into something that will land you in a timeout. 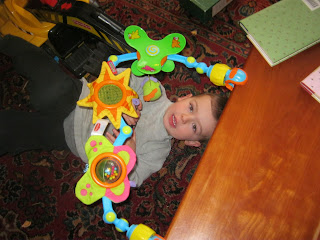 Here Cubby explains the bit is getting dull from all the fixing.  Noted.  Maybe the next episode will feature "How To Sharpen a Screwdriver Bit." 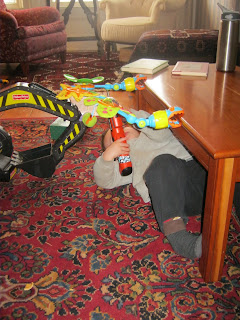 Now, start screwing.  And don't stop until the continuous whirring of the screwdriver has caused Mommy to start dreaming of the day the battery runs out.  And she hides the charger.

And that's it!  Rocket ship prepared for liftoff, courtesy of Cubby and his screwdriver.
Posted by Kristin @ Going Country at 10:43 AM 3 comments:

Cubby has been requesting of late that we have a picnic.  A picnic.  In January.  I have explained that picnics are usually reserved for the months of the year in which the ground is not covered in snow.  I tried to placate him with an indoor picnic for lunch yesterday.  He persisted in asking to go on a picnic outside.

Finally I gave in and announced we would be going on a picnic today.

For today's Sunday Family Fun activity, we put some food in a backpack, put Charlie in his carrier, and hiked up to The Plantation for a winter picnic.  Since The Plantation is in fact a plantation of pine trees, there was plenty of dead fall wood for A. to make a small fire.  I used the fire to heat up Cubby's bread and honey (specifically requested by him, with the added impossible request that it be toasted--I skewered it and got it warm over the fire and called it toasted).  We had a Thermos of hot tea, some cheese and apples, a whole lot of snow on the ground, and a little freezing rain for added enjoyment.

It was a pretty good picnic.  As far as picnics in January go, that is.

And then, for dinner, Cubby finally got to eat a squirrel.  He goes to the woods quite frequently with A. in the pack, and always requests that A. shoot a squirrel to eat.  The problem with hunting with Cubby in attendance is that he never stops talking.  Which means the squirrels have plenty of warning and are well hidden by the time the mighty hunter and his chattering companion approach.  But this morning, Cubby was a little sleepy and he stopped talking long enough for A. to shoot a squirrel.

It was a big, tough male squirrel, which is maybe not the best for eating, but A. shot it, so dammit he was going to cook it for Cubby.  First he brined it all day.  Then he boiled it for about an hour, changing the water once.  Then he coated it in flour and spices and fried it.  And Cubby went to town on that squirrel, man.  Rarely have I seen him eat with such gusto.  He gnawed on the leg bones in a most enthusiastic--and frankly a little repellent--manner, announcing that he liked the squirrel, he likes chewing bones, he likes crusty meat.

Okay then.  We'll call the squirrel a hit.  I guess A. will be doing more squirrel hunting in the future.  I'll just avert my eyes from the savage toddler at my table.
Posted by Kristin @ Going Country at 6:08 PM 8 comments: