Long version: The salad was MY LETTUCE, HOORAY.

I am not getting any less enthused about my lettuce, no. And I don't expect I ever will.

Long version: Skirt steak may have ruined me for any other cut of beef when I make fajitas now.

I had plans to pan-fry the sweet potato and then didn't feel like getting another hot pan going on the stove, so I microwaved it. Lazy, but it does the job.

Long version: Look at me, all ambitious and roasting the sweet potatoes this time! I'm patting myself on the back right now.

The tuna patties were three big cans of tuna, bread crumbs, mayonnaise, Dijon mustard, two eggs, dried dill weed, and pepper all mixed together then formed into patties, and fried in bacon grease.

I was just thinking the other day that I don't really cook anything I remember eating when I was growing up, but then I went ahead and made the pasta the way my mom often did. That is, after the pasta was cooked--it was this weird "Italian blend" of three different shapes, which is really stupid because the rotini was mushy by the time the penne was cooked--I added butter, cream cheese, garlic powder, and pepper to it and mixed it around until the butter and cream cheese were all melted and evenly distributed. My mom always added Parmesan cheese from a can, too, but all I have is the block of Parmesan and I couldn't be bothered to grate any.

The term "comfort food" is terribly overused, but I must admit this is my comfort food. An immediate time machine ride to when someone else was cooking for me. Ah, the carefree days of youth. And pasta.

Long version: I just love using only one pan to cook dinner. 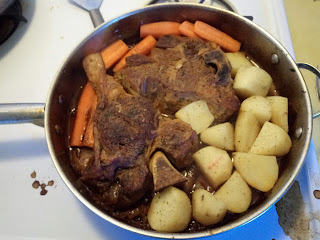 It's just so efficient.

Well, one pan plus aluminum foil for cooking the beets. I bought the beets a few weeks ago intending to use them to dye Easter eggs. Then my virtuous plans were foiled by Miss Amelia's daughter Gabby, who sent the kids an egg-dying kit. So we used that for the eggs and just ate the beets.

Despite the geriatric nature of some of the ingredients, the soup turned out well. Cubby, Jack, Poppy, and I ate the soup with cheddar cheese.

The mutton was a butterflied leg roast that I marinated in olive oil, apple cider vinegar, garlic, and salt, then just fried in bacon grease on my griddle pan. A. ate that with leftover roasted vegetables. Charlie ate it, too, with leftover beets and a piece of bread and butter.

Long version: I had a can of tomatoes in the refrigerator that I needed to use up, so I made a marinara sauce with them and meatballs to go with the marinara, using my proprietary method.

I had to bake bread again, so we had garlic bread again. I used to bake bread every ten days. Now it's more like every six days. Soon it will probably be every other day and then I might as well just give in and open a damn bakery.

The salad was MY LETTUCE again, HOORAY. Also my radishes. The ones I could smuggle past the kids anyway, who will consume every radish I pull out of the ground immediately upon harvesting regardless of dirt.

Long version: I had a more elaborate plan for dinner than this--though still featuring eggs, so not much more elaborate--but then A. was in the middle of a large paper organizing project that required the clear space of the dining room table. So at dinner time, this was what the table looked like: 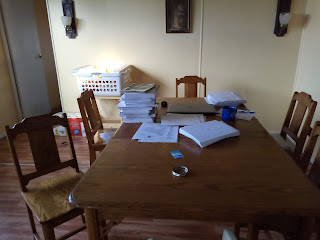 A. was planning on continuing his work after dinner and didn't want to shift a hundred pounds of paper for the twenty minutes it would take us to eat, so I made the kids food they could eat on the floor. They had egg sandwiches and apple slices on our picnic blanket on the kitchen floor. 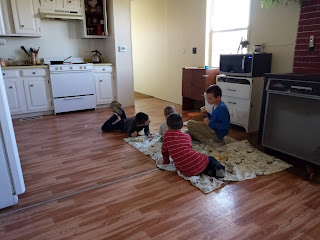 I made scrambled eggs for A. and me, with the additions of some leftover cooked mushrooms, salsa verde, and cheddar cheese. We got to eat at the remaining two clear spaces at the table, because floor picnics are not quite so exciting for us boring adults*.

* Appropriately, as I was making this dinner, Charlie randomly charged into the kitchen and announced, "Humans can't get it right. We go from annoying children, to stubborn teenagers, to boring adults." Then he charged right back out again without giving me any time to reply. Not that I was going to argue with that assessment.
Posted by Kristin @ Going Country at 4:58 AM 5 comments:


When we were in Tucson for Thanksgiving, we went to a very fancy garden center to buy a fig tree for my brother-in-law's new house. It was a truly impressive establishment that obviously caters to people who have a lot of money to spend on their landscaping. They had everything.

This was, of course, a torment for people like us, who do not have a lot of money to spend on landscaping but nonetheless covet all the orange trees and fig trees and peonies and everything else for our new, totally un-landscaped house.

We really couldn't be buying a bunch of plants, though, so I consoled myself with a package of Very Fancy Tulip bulbs that were still way more than one ought to spend on tulip bulbs, but at least weren't a fifty-dollar tree.

There were six bulbs in the package. A. planted them in front of the house right next to one of the raised beds that flank the entrance to the driveway.

About three days later, there was an obvious gopher excavation right where he had planted them, and we sadly wrote the Very Fancy Tulips off as victims to the wretched rodents.

Also, A. spent many vindictive minutes flooding the hole and then putting poison in it. Too late for the Very Fancy Tulips, but it made him feel better.

But then, this spring, what should appear? Are those . . . the Very Fancy Tulips?

Yes! Three of the Very Fancy Tulips had survived the gopher incursion and were sending up their leaves. Of those three, only one actually bloomed. But what a bloom it is. 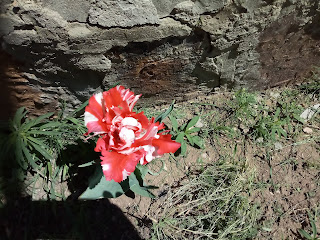 We also have some plain old red tulips left behind by Dale in the raised beds that seem to be flourishing with no care whatsoever--even propagating themselves, which is very unusual for tulips. This caused A. to remark that perhaps these Very Fancy Tulips are a mite too fancy for our admittedly harsh environment.

Nonetheless, we will be carefully transplanting our three remaining Very Fancy Tulips into a less vulnerable position in the hopes that next year we might get all three to bloom.


There has been a distinct reduction in our Family Fun days since we moved into this house. And that is, of course, because there is so much to DO in a new house. The Fridays we used to spend descending into canyons and picnicking by streams we now spend planting gardens and fixing up the old chicken coop for its new residents (coming soon!).

But we did have a special Monday edition of Family Fun the day after Easter. We went to a national grasslands area about an hour away and spent some time driving around and exploring.

This photo of our picnic in the middle of nowhere reminded me of the descriptions by Laura Ingalls Wilder of her family stopping the wagon for lunch and sitting in the middle of the wide open prairie, eating hard boiled eggs dipped in a paper of salt and pepper. 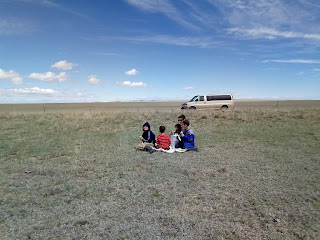 The van is, of course, the modern equivalent of the Conestoga wagon.

And lest you think that we weren't really in the middle of nowhere and there was some kind of habitation on the other side of us, here's the opposite view. 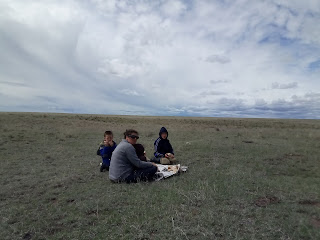 That photo also shows the coming storm that forced us to cut our picnic short before the rain came and turned the dirt road we had to go back on into a mud pit.

Before the picnic, though, we explored an abandoned homestead up the road a bit. One of the things I love about New Mexico is that when the sun is shining, even I, the World's Worst Photographer, can't mess up a photo.

I mean, check out the light in these photos. 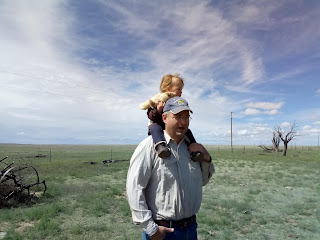 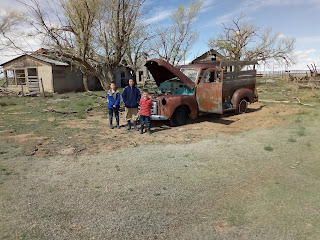 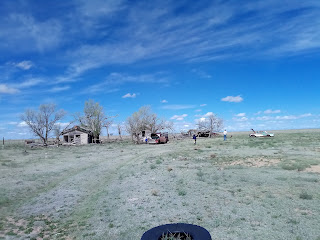 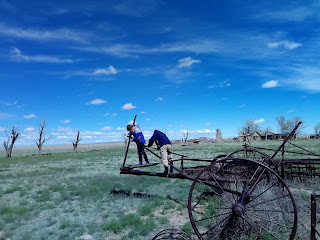 Who needs filters when you've got a New Mexican sky?

Of course, this weekend was right back to the weeding and fixing and planting, but that was a nice day off.