Testicle Parmigiana Just Like Your Nonna Used To Make


"Wait," I can hear you saying. "Does that say testicle parmigiana? That can't be what I think it is."

Except it is. It is exactly what you're thinking it is.

Yes, it's a new delicacy from the people who brought you alarmingly animated sea creatures and beaver tacos. And it is testicle parmigiana.

I'm sure no one will be surprised that this all came about because of A. I am unlikely to invent such a dish, but A. did.

The recent stretch of cool weather meant that he could slaughter another lamb. So he did. The carcass hangs for a few days to age, but in the initial dressing of the lamb--which involves gutting, skinning, and cutting off the head--he removes the testicles and the tenderloin.

I should note at this point that we call the testicles "sweetmeats" because I hear enough giggling from my sons about male parts. I'm all for knowing what your food is and being accurate and all, but there's no need to add fuel to that particular gross fire at the dinner table.

The last couple of times he's cooked the sweetmeats--and make no mistake that it is him cooking them, not me--he's just cleaned them up*, sliced them, and fried them. They're fine this way, but he told me last time that they're so neutral in flavor that he thought they would benefit from a sauce.

So I suggested this time that maybe he could make a sauce from the sun-dried tomatoes he made last week, which turned out really well, as well as some of the chicken stock I made from the carcass of our exciting chicken, and some heavy cream. Couldn't be bad, right?

He added some garlic, too, and it was, indeed, a very good sauce. So what did he do with that very good sauce? Well, he first fried the sliced sweetmeats in olive oil, along with butterflied pieces of the tenderloin and some sliced country-style pork ribs. You know, just to make sure there was enough meat.

Then he dumped the sauce over the fried meats (without even draining off the fat first, which is classic A.).

And then, just to make sure no one could possibly go hungry, he covered the entire pan with a layer of mozzarella cheese and let that melt.

Yes. A variety of fried meats in a tomato cream sauce and melted cheese. No one could call this a light meal.

He couldn't stop saying how delicious it was. Cubby ate some of the sweetmeats. Charlie and I ate the pork. Jack mostly ate the melted cheese. Something for everyone.

But mostly for A., who was thrilled with his creation.

So there you have it. Testicle parmigiana: It's what's for dinner. But only if A. is cooking.

* You--by which I mean A.--have to remove the membranous sac around the, uh, meat part and trim off some veins and stuff. I think. I try not to look too closely.

Labels: country wisdom, domesticity, fun with food, the A team

I'm Sure This Isn't Even a Little Over the Top


Last night I was sitting around in the lull between dinner and bedtime, mentally reviewing the time and what came next in the children's inexorable easing into bed, when I realized that nobody knows their schedule like I do.

I mean, obviously. Since I created their schedule and all.

What I mean is, sometime in the next couple of weeks, either A., the MiL, or my mother will be pinch hitting for me with the three maniacs while I deal with a newborn. And it might be helpful for them to know things like when the school bus comes or when the kids start picking up for bed.

So I created the following not-at-all-crazy daily schedule cheat sheet for them: 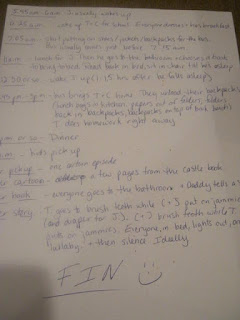 A day in the life of a (possibly over-) regimented mom.

A. came upon me writing this schedule and immediately asked if he needed to take me to the hospital. Nope, just need to be prepared.

It's entirely possibly none of the three caregivers will even look at this, but it made me feel better to write it anyway. And making the pregnant lady feel better is always the goal, right? Right.

Labels: all about me, Charlie, confessions, Cubby, Jack, randomness, the A team

The Excitement of Poultry


Yesterday A. and Jack accompanied me to the Big Village for a status check on the baby (status: still there and healthy, still hanging out until further notice) and we happened to pass the farmers market. I've never been to this farmers market, so we decided to stop.

I'm so glad we did, because the very first table I came to had pastured chickens for sale.

That was literally how excited I was. I mean, I didn't literally shout "YAY!" in the middle of the farmers market, but I was shouting joyfully on the inside.

With the exception of the occasional rooster from Ms. Rita or A.'s random desire for fried chicken, we haven't had any chicken since we've been here. It's a pretty much non-stop rotation of pork, beef, and lamb, with the occasional dinner of tuna patties or eggs when I need a break from the parade of meat.

I know. It's not as if I can't buy chicken. Except that I . . . can't. I will occasionally pick up a package of chicken thighs or whatever at the grocery store and consider it, but then I remember that I get grossed out by store-bought chicken and pork (oddly enough, beef is okay--not good, but okay) and I don't buy it.

I just can't stomach a factory-farm chicken now that I've had real chicken. So, no chicken. Until yesterday, when I saw that sign for pastured chicken.

The farmer was charging $3.25 per pound, which seems like a lot only if you're accustomed to paying $.99 per pound at the grocery store. For a pastured chicken, that's actually a pretty good price. I remember seeing chickens at the enormous, fancy farmers market near Blackrock that sold for something like $25 per chicken, which is a little much for me. By comparison, $13 for a chicken seems like a pretty good deal.

Especially considering how excited everyone is to eat it. A. kept going on about how great it's going to be to have a roast chicken. I announced our forthcoming chicken dinner to the children this morning and Cubby and Charlie were all, "Yay! We love chicken! We haven't had chicken in a YEAR!"

Slight exaggeration, but not too much.

Even poultry is an event at our house. We probably need to get out more.

Posted by Kristin @ Going Country at 5:48 AM No comments:

Labels: all about me, Charlie, chickens, confessions, Cubby, fun with food

Days of Flies and Tomatoes


Our tomatoes are certainly loving this very unseasonable heat. A. harvested another box full of paste tomatoes for me this morning, so I spent part of the morning canning six more quarts of tomatoes in the hot water bath canner.

And then I had to put on the air conditioning.

Screw guilt. Give me the almost-October A/C.

Also in tomato news, A. had the brilliant idea of drying some of the tomatoes outside. Might as well make use of 89 degrees with punishing sun, right*? He has three trays full of the beefsteak variety of tomatoes drying on top of the Subaru. It's so nice to see the Subaru as food dehydrator put to use again.

I also find it funny that A. seems to have finally succumbed to the Tomato Crazy. It must be catching.

Unfortunately, this hot weather has also brought out the flies. In droves. The three big glass doors in the living room leading to the elevated porch look like a horror movie. Flies EVVVVVERYWHERE. The kids love swatting them, which is fine, but more always appear. We must have swatted four dozen flies yesterday.

I am befuddled by this. All the windows and doors are shut tight. How are they getting in?

At least they seem to confine themselves to the windows, though. They're not attracted to food or people. But still. There are smeared fly guts all over my doors, which I am waiting to scrub off until the end of the heat wave because I know there will be more until it cools down.

So that's where we are. Preserving tomatoes, swatting and sweeping up flies, and running the air conditioner until further notice.

* Fun fact: It was hotter at my house on the Canadian border yesterday than it was at my parents' house in Tucson, Arizona. How's that for messed up?

Labels: all about me, gardens, the A team, The Tomato Crazy, weather
Newer Posts Older Posts Home
Subscribe to: Posts (Atom)