I Will Forego the Obvious Title

Which would be, of course, "It's Beginning to Look a Lot Like Christmas." 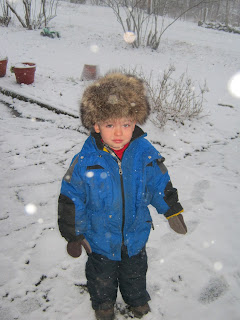 A woodchuck Christmas, that is, featuring dead animal head coverings.

There was already an inch or so of snow on the ground when we got up this morning, and so of course Cubby wanted to go outside.  He requested his coonskin cap specifically.  He has so far refused it every time I've suggested it, so I guess he just thought it was only for "real winter."

Or something.  I don't pretend to know how his convoluted toddler mind works.

We're starting the celebrations today, with gift exchanges and dinner with A.'s family before we leave tomorrow for my sister's house in Virginia for five days.  I have not packed a damn thing.  It's going to be a really fun evening, I can already tell.

But as soon as Cubby awakes from his nap, he gets to open his gift from us.  Which is a real toolbox with real tools.  Including a small saw.  I anticipate some excitement.  Also a lot of reminders that these tools are outside tools.

It'll be fun anyway, though.  And then tomorrow . . . road trip.  With two small children.  In the snow.  Cross your fingers for us. 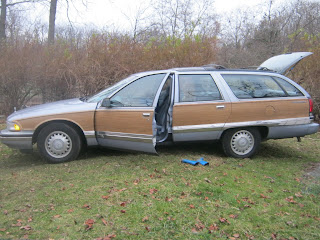 That right there is a Buick Roadmaster Estate Wagon.  It can haul as much as a truck, because it's HUUUGE. 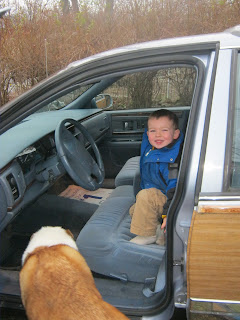 He was right.  But it does scream "Mack Daddy," don't you think? 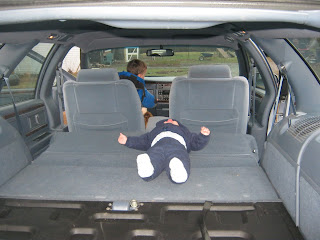 Room for the kids?  Sure! Even our behemoths. 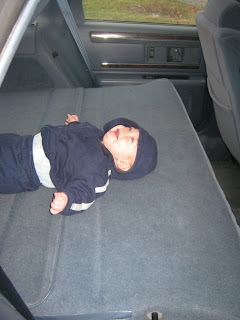 Two fists up and a gummy grin from Charlie.

I don't know why, but my favorite part of this thing is that it has the third backseat that faces backwards.  Not that A. will ever use that seat, since it will probably be permanently folded down to make way for bags of mortar or pieces of wood or whatever.  But I'm gonna ride in that backwards seat at least one time.

It also has a sunroof.  And an enormous trailer hitch.  And a V-8 engine.  Plus, obviously, room for the children, AND a back area big enough for a grown man to sleep in, should that be necessary. It is, in summary, A.'s dream machine.

It's nice to make a dream come true sometimes.  Even if it's only the acquisition of a wood-paneled station wagon.
Posted by Kristin @ Going Country at 5:56 PM 9 comments:

On Being the Mother of Giants

I have mentioned many times that my sons are big for their ages.  This is never more apparent to me, however, than at the story hour we go to at the library.  It's pretty much the only place I come into close contact with other kids (and that, I'm sure, is a sad commentary on my own reclusive nature, but there you are) and so that's where I see how my kids look in comparison to other kids.

Cubby is one of the oldest children that attends now, so he's just like this big lumbering giant among a crowd of pygmies.  I have to stop him from following the smaller children around too closely, because if they stop suddenly and he accidentally runs into them, they're flat on their faces and screaming and he's looking down at them from his great height like, "What just happened there?"

Today he was running around a bench and ran smack into a very little girl on the other side.  She bounced off of him and landed---unhurt--on the floor.  He was unfazed. The girl's mother is, thankfully, very cool and didn't seem too worked up about it.  But I still felt bad about my wrecking ball son and his trail of destruction.

I foresee a lot more fallen children on the scene when he starts running.

I may need to investigate leashes.
Posted by Kristin @ Going Country at 9:53 AM 7 comments:

The new fun game at our house: The Owl Game.

Let me narrate for you tonight's Owl Game.

Ever the indulgent father, A. turns off all the lights in the living room and then shuts the door, leaving Charlie and me sitting in the darkness, listening to Cubby fall over the various toys he's scattered about the living room.

Cubby: "I wouldn't have done that if I were a real owl.  But I'm just pretending."

Since he's not a real owl, he has to periodically turn on the glaringly bright overhead chandelier to look for his (non-functioning) watch; see what's sticking to his foot (the velcro on his felt tool belt); and find his hammer for an imperative repair to . . . something.

So Charlie and I sit there on the couch in the dark with the lights going on and off, observing the world's most incompetent owl.

And that's what passes for entertainment around here.
Posted by Kristin @ Going Country at 5:57 PM 7 comments:

I know I've mentioned before (but am now too lazy to look for and link to that mention, wherever it might be) how utterly useless I find most cold-weather children's clothing.  Cotton, cotton, acrylic (gross), and . . . more cotton.

I don't knit, so I'm not making my own.  Most stores don't carry it, even if I were willing to pay retail for clothing my kids grow out of within months*.  Retail for the sort of clothes I need for them is like fifty bucks for one wooly sweater.  That's not really an option for me.

And here's where I sing the praises of and bow down in gratitude for second-hand stores.  The Salvation Army has been my, uh, salvation (sorry--it was irresistible) more than once for good winter clothes for Cubby and Charlie.  The wooliest wool sweaters I've ever found have been there.  Also the fleece-lined overalls, the heaviest fleece pajamas, and the best flannel shirts.  For, at most, four bucks apiece.

Today we went to the slightly-fancier and therefore slightly more expensive consignment store dedicated to children's clothing.  But even with their slightly higher prices, I got multiple mostly-wool sweaters, corduroys and flannel-lined overalls and jeans, flannel shirts and sweatshirts for about the cost of two good sweaters at retail value.  The most expensive item was still less than ten dollars.  And it's all really, really good-quality, useful stuff.

I'm glad someone is willing to shell out the cash to buy this stuff new, so that I have the option to buy it used. Because there is no way I could adequately clothe my children otherwise.  I mean, without taking up knitting myself.

* I'm not kidding about the growing.  Today I bought 12-month sized clothing for my five-month-old and size 5T for my not-quite-three-year-old.  I never imagined I would only give birth to giants, but here I am, and here they are in their RIDICULOUSLY LARGE CLOTHING, GOOD LORD.