Blackrock has no shortage of antiques and spectacular pieces of furniture, but my favorite of all is what we call The Long Table.

It is, as you might expect, a long table. But such a table. It's long (I think you've gathered that by now), and it's wide, and it's really, really old. Maybe as old as 17th century, although we don't know for sure. What we do know for sure is that they definitely don't make 'em like that anymore.

The Long Table is in the living room, and it makes a very nice display area, as you can see in this very old photo in which it was the punch bowl station for a really big party we had. 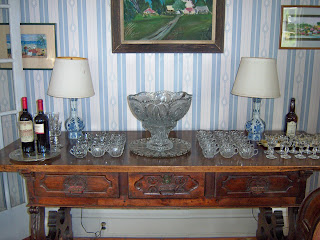 One of the things I love about this table is that it's so large that it can look uncluttered even with a few things on it. When it's relatively clear and properly dusted, it's all shiny and smooth and very pleasant to look at.

Unfortunately, the flipside of having a large clear surface is that it's like a magnet for junk. Don't know what to do with that pile of papers? There's plenty of room on The Long Table! Need to get that big library book out of Jack's destructive reach? Just put it on The Long Table for now.

And then it becomes a Long Table of Crap.

I try really hard to keep it clear, though, because it's good for my mental health to have at least one surface in the house clear of crap. A couple of days ago I set myself the task of putting away all of the random stuff strewn over all the tables and desks in the living room and then dusting. My reward for accomplishing this was to cut a bunch of lilacs and put them in a pretty vase in the center of The Long Table. 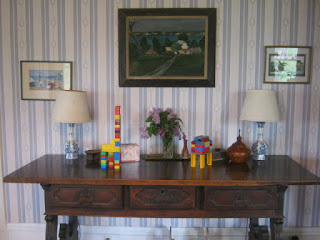 Does something look a little . . . jarring to you in this tablescape?

Those are very important battle ships that could not be dismantled at pick-up time last night. And so they were carefully put away on top of my shiny, uncluttered, flower-bedecked Long Table.

Oh well. It was nice while it lasted.

Labels: all about me, Blackrock, Charlie, Cubby, domesticity, randomness

The (very, very small) school that Cubby attends performs a play every year at the end of the school year. This is something that Cubby has been looking forward to pretty much since he started school. It's a Big Deal. They do it on the big stage in the auditorium of the college in the village. There are sets and costumes and they choose pretty ambitious plays for a group of kids who are all under the age of 13. Last year it was Peter Pan. The year before was Shakespeare's Twelfth Night. This year . . . I can hardly say it without doing a little dance of joy.

This year it's The Princess Bride.

I really cannot convey to you how happy I was when Cubby announced this to me a month or so ago. Though he actually didn't know the name of it, and just gave me a garbled plot synopsis along the lines of, "It's about a man who wears black all the time and there's a giant and swords and a lady named after a flower." Such is my love for this story that I figured it out just from that.

The movie is one of my favorites ever. The book is similarly beloved. I can't believe that Cubby gets to be in a play based on it.

Not that he has a big part, obviously. He's only six. I have no doubt he could memorize lines (he memorizes entire long books, why not lines?), but I think the idea of stage direction or acting with others is a little beyond him. There are quite a few very young kids at the school this year, so they get to be Prince Humperdinck's soldiers (though Cubby insists he's going to be "a knight") and--this is the best--"The Ancient Booers."

Remember the scene where Buttercup has a dream that she's being introduced as Prince Humperdinck's bride and an old lady in the crowd starts booing and saying she threw true love away and that she's the queen of refuse? Yeah, that. Those lines have been split up for all the little kids, so they all get to boo--which I'm sure they love--and then they take turns with the other lines.

Suitably dramatic, no? I do sort of wish he got to be Ancient Booer #6, whose line is, "Bow to the queen of slime."

Labels: all about me, Cubby, randomness, school

A Trinity of Boys

It has just recently dawned on me that I no longer have two boys and a baby. I definitely have just three boys. 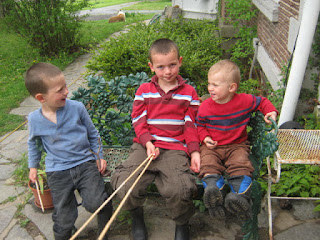 Wheresoever Cubby and Charlie be, there be Jack. 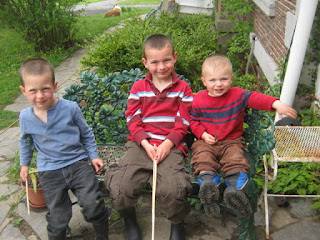 Brothers by blood, and brothers by muddy boots and buzzcuts. Amen. (Also, please notice that every dang one of 'em is wielding a stick. In Jack's case, it's only about two inches long, but still. He's learning fast.)