The children and I are in heavy mouth-breathing territory with this cold at the moment, which is just as fun as you would imagine. Thankfully, it warmed up enough this afternoon that we could go outside for an hour or so without any screaming due to frozen hands or noses.

Cubby is still a great fan of foraging, and Charlie is emulating his example with the wild chives that are everywhere this time of year. I don't even know if they're really chives, but they look like thinner versions of chives and they grow wild all over the lawns, so . . . I'm going with wild chives.

Cubby asked me if they were good for a cold. Sure, I said. I know garlic has been shown to boost the immune system, so why not other alliums, right?

Right. At what age do you think he'll catch on to the fact that I'm making this stuff up half the time?

Anyway. He then proceeded to pull up fistfuls of the chives and eat them, with Charlie doing likewise. Cubby made the mistake of shoving an entire bouquet in his mouth at once. He spit them out in a hurry, though, when the full impact of that many raw chives hit his tastebuds.

And then, of course, both children stunk of onions for an hour or so. Good thing I can't smell much at the moment.
Posted by Kristin @ Going Country at 6:00 PM 2 comments:

It's a big day when a boy gets his first real hammer. 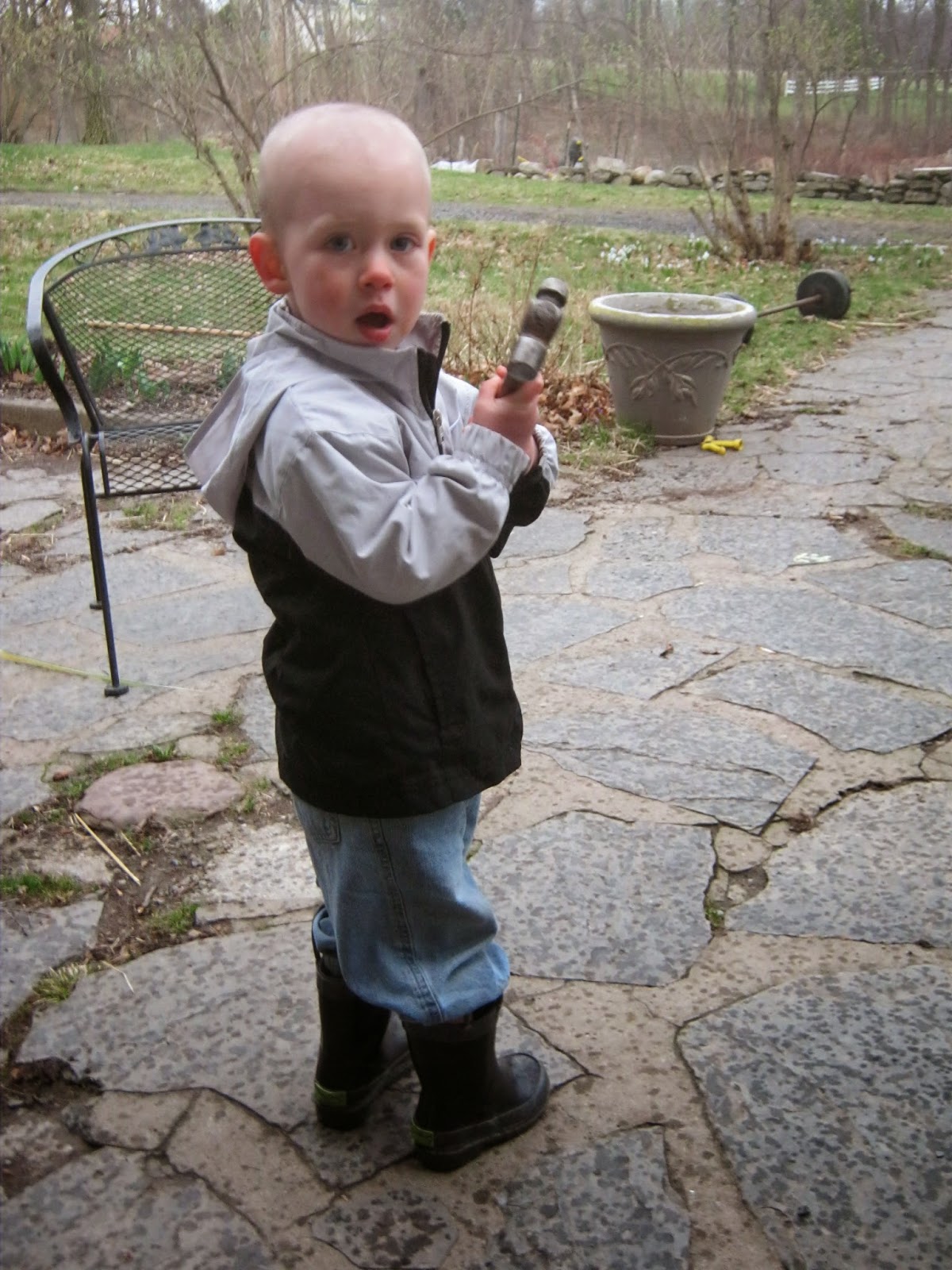 Pro tip #1: The first hammer should be a tack hammer. Small enough that there's less inadvertent wild swinging due to excessive weight.

A big day for me, too, since when each brother has his own hammer and his own nail to hammer on, there is significantly less fighting and likelihood of someone getting smashed in the face with a hammer claw. 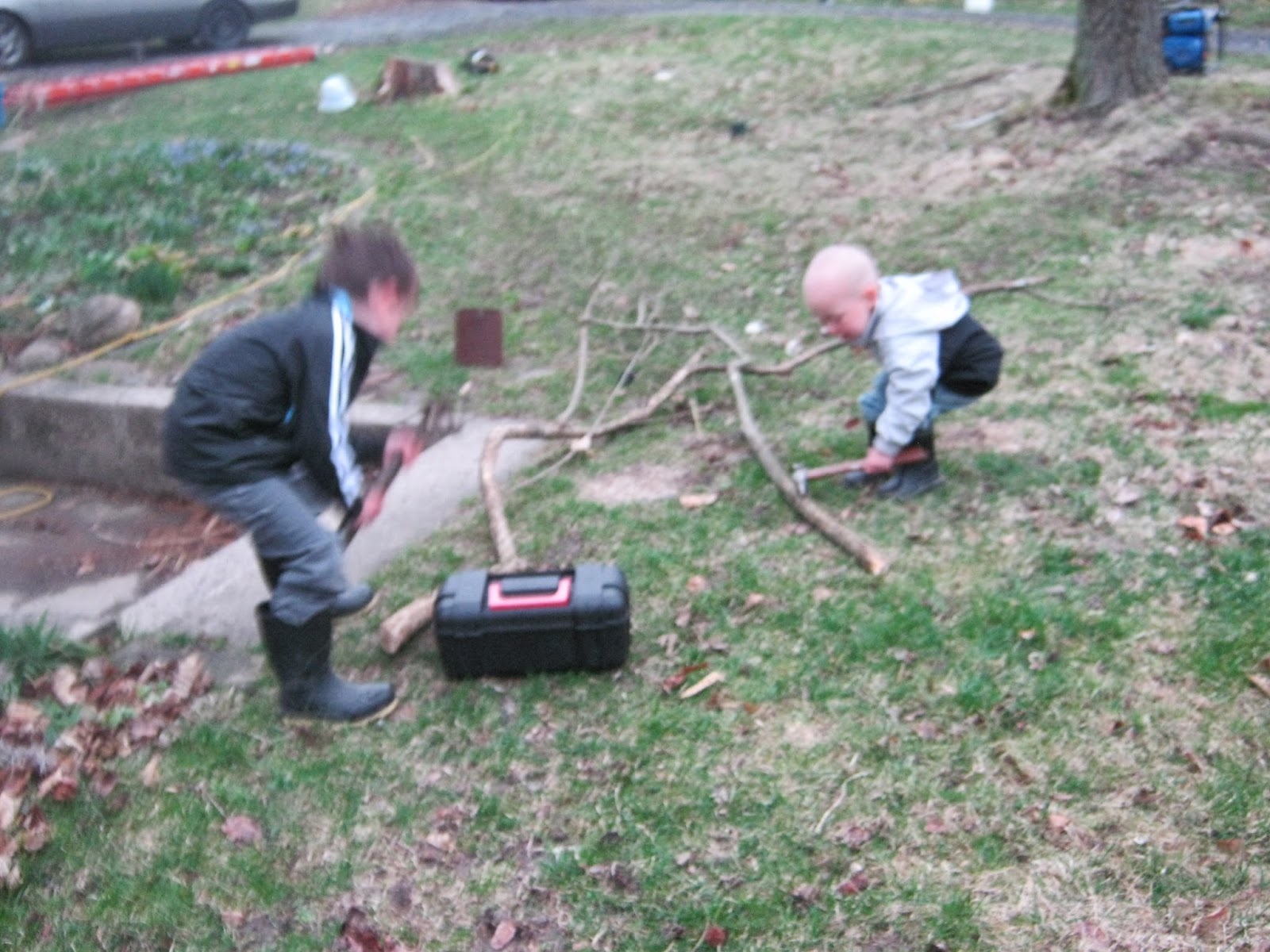 Pro tip #2: Start the nails for them on pieces of wood spaced very far apart. That way, they can only hurt themselves, not each other.

Just imagine the mind-blowing joy of his first experience with a real saw.

We'll wait awhile for that, though. One more year should do it.

Cubby is sick again. Just a cold, and not nearly as severe as the last nasty thing he had a month ago, but still sick. This means, of course, that he must have chicken soup.

I think I mentioned to him one time about a year ago that chicken soup can help make colds go away, so now every time he's sick, he must have chicken soup. With potatoes, because noodles and rice are forbidden. He must have the magic elixir or heads will roll. Specifically, Mommy's head.

So when he came downstairs this morning snuffling and whining about snuffling, I knew chicken soup would be dinner tonight. I had chicken broth on hand, two quarts left from when we got rid of the chickens and I made and canned a few gallons of broth. I had vegetables. I did not, however, have any chicken.

I figured I could make the soup minus the chicken and just ask A. to pick up a rotisserie chicken on his way home. That way I could just shred it quickly and add it to the soup in time to eat.

So I called A. at work. I asked him to stop at the store and explained that Cubby wanted chicken soup. Before I could get to the part about A. buying the chicken for me, he said, "Okay, so just a can of Campbell's or something?"

What? Campbell's? Has he not been living in the same house with me for the past decade?

It's not as if I didn't eat my share of Campbell's soup growing up--minestrone was my personal favorite--but I don't eat it now. I mean, I have nothing against Campbell's, it's just . . . okay, yes. Yes, I do have something against it: It tastes terrible. And I could imagine Cubby's reaction if I served that salt-laden, watery mess with (God forbid) noodles to him in place of his beloved life-giving chicken soup with potatoes.

Pretty sure it wouldn't go over well.

I set A. straight and he dutifully went to the store. They didn't have rotisserie chickens at the small market near his office, so he bought some chicken tenders instead. Not Campbell's. Wise man.

Labels: all about me, Cubby, fun with food, the A team
Newer Posts Older Posts Home
Subscribe to: Posts (Atom)