Long version: It had been awhile since I'd made roasted potatoes. They sure are good.

Long version: Miss Amelia gave me some of the green chilies that she buys during the season, roasts herself, and then freezes. I had some stew meat out for dinner, so I browned that, added onion and garlic, then the green chilies, and simmered until the meat was tender. Then I added potato chunks and, at the end, sour cream. I served it with grated cheddar cheese for the top and fresh lime to squeeze in it. Plus some diced green garlic because the gophers have been eating some of A.'s garlic.

Yes, garlic. I didn't think anything ate garlic. It's even used as a natural deterrent for most animals. But apparently those wretched rodents will bite it right off underground. A. is pissed. Those gophers are going to rue the day they targeted his garlic.

I would normally have cooked carrots in the stew, but Charlie still dislikes cooked carrots and I didn't feel like watching him pick through them, so I left them out and just plopped some carrot sticks on everyone's napkins.

Long version: I didn't plan my Mother's Day dinner very well. Or, um, at all.

I had some vague idea of having A. make hamburgers, so I took out ground beef. But then I realized I could also have A. make tortillas, which sounded much better. So I made the ground beef into taco meat, and A. and I made more corn tortillas to go with them.

I didn't have any avocados or sour cream, more's the pity, but I did have a little more fresh lime for squeezing. And honestly, the fresh tortillas are all that really matters.

I froze half of one this time to test if freezing will change its texture. (Update: It didn't. Full speed ahead with tortillas making!) My dad is going to make me a wooden tortilla press, so we may shortly become a small-scale tortilla factory here.

I had some no-bake cookies on hand (I used this recipe but added a couple of tablespoons of cocoa powder to them and reduced the sugar slightly--they were still too sweet) because I made them for Cubby and Charlie to take on their 6-hour bus ride for their field trip. Inexplicably, they did not eat them, and the cookies returned to me definitely the worse for having been tumbling around in backpacks all day. That is, they weren't so much cookies anymore as small chunks somewhat resembling granola. I tossed the baggies of chunks into the freezer along with the extra whole cookies.

Sunday morning it occurred to me that those chocolate-peanut-butter-oat chunks would be fantastic on vanilla ice cream. I asked A. to pick some up at the tiny store in the village when he went for church, but alas, the store's freezer stopped working and there was no ice cream.

So we ate just the whole cookies instead. They're better frozen. Better texture. I still think they would have been best with ice cream, though. But then, what isn't?

Long version: Still my lettuce. Still thrilled about it. Oh! And also some arugula that I thinned. Man, I love arugula. I can't imagine it will last long here before it bolts, but I'm going to enjoy it while it does. 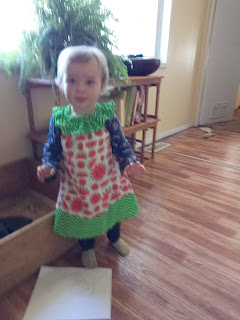 Jack's preschool teacher dropped off a big bag of clothes for Poppy and of course, they must be tried on right away. Very stylish, I'm sure you'll agree.

Long version: It's meals like these that really make me confident that my children will credit their sophisticated palates to their mother's cooking when they write their foodie memoirs. Ahem.

Long version: Last day of school for Jack! Track and field day for the boys (and me and Poppy as spectators)! 4-H meeting with a bonus origami demonstration by Cubby!

By the time I got home at 5:15 p.m. with four very tired children who were stuffed full of popsicles, cookies, Rice Krispie treats, and more popsicles, I was reeeeeally not into the whole "making of dinner" thing.

Luckily, I had already peeled and cut up the potatoes and left them in a pot of water, plus washed the lettuce (MY LETTUCE STILL, HOORAY), and thawed the meat. So all I had to do was turn on the pot of potatoes to boil, spin the lettuce and make a vinaigrette, and fry the hamburgers.

It's a measure of my fatigue that I didn't even bother with cheese on top of the burgers. Not that anyone wanted to eat actual food anyway, after all the popsicles.

Just as a matter of interest, if you are not aware of the sheer quantity of crap that children haul home from school at the end of the year, please enjoy this graphic visual of the crap times three that got spewed all over our entryway as soon as we walked in the door: 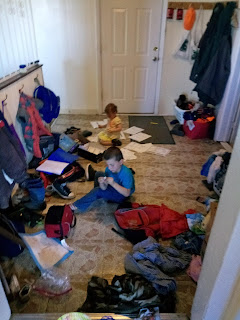 Scattering papers to the four corners of the entryway did keep Poppy entertained while I made dinner, so there's the bright side to this horrific mess.

Thanks for messing up my attempt to be fun and celebratory, school lunch people.

A. bought asadero cheese for me on Tuesday when he had to venture to a Big City (13,000 people--everything's relative) and I did have a ball of dough in the freezer, that I had put in there last time I made pizza, along with a small bag of extra pizza sauce. So I pulled those out for a celebratory pizza dinner.

This was the first time I had frozen the dough raw--as opposed to par-baked--and I was surprised at how easily it stretched into the pan. Usually I have to make sourdough pizza a thick-crust sort of thing, but this stretched right out into a very thin crust.

The thawed sauce was thin, too. Watery, actually, which I discovered when I was about to put it on the pizza. So I had to quickly reduce that in a skillet on the stove, because watery pizza sauce is no good.

The crust turned out tough and kind of greasy and not very appealing. Charlie agreed. Everyone else had seconds, though, so it wasn't a total waste.

I only had enough for one somewhat small pizza, so I fried an extra steak for A. that wouldn't fit on the pan on Monday. I made a random mixture of leftover hamburger, the last bit of pizza sauce, peas, and cheese for me.

Today is the first day of summer break. Tomorrow is our 5K race. I could use prayers/positive vibes for both of those things, please and thank you.


It's a good thing I don't have an Instagram account. I would be the worst Instagrammer in the (brief) history of that photo-sharing site.

Here it is, Mother's Day, which Hallmark tries to elevate to Major Religious Holiday status for us females charged with keeping small humans alive. And what precious photos do I have of my adorable gap-toothed* children showering me with gifts and cards and breakfast in bed and whatever other cliches are hawked by the advertising industry?

I could have taken a photo of the adorable four-year-old who made this tea towel for me at school, but I didn't. 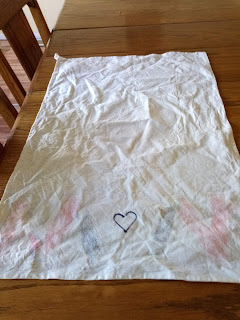 I've already used this to cover my bread dough and freshly-made tortillas. Way to go, preschool teacher, for coming up with a very practical Mother's Day gift.

I could have taken a picture of the nine-year-old who is currently running at the nose, coughing like a habitual smoker, and plastered to the couch, but I didn't. (I did stay home with him from church, though.)

I could have taken a picture of the six-year-old who remarked out of the blue yesterday, "It seems like you're always able to find fault with us," but I didn't. (I also should have replied that that is a mom's special super power, but I didn't do that, either.)

So what did I do? Well, I tried to hide away in the bedroom to read for a little bit while A. had all four kids outside, but they started to trickle in one by one and I hadn't actually locked the door, so pretty soon I had three of the four children rolling around on the bed with me. A. came in to haul them all out and Cubby told me cheerily, "Well, at least you're never lonely."

No. No, I am not. And for that, I am extremely grateful.

But I still locked the door after that.

Happy Mother's Day to my sisters-in-arms. I hope your day was exactly as you wished it to be.

* Charlie is the only one with a gap at the moment, actually, as he lost his first tooth last week. The second tooth is even now loose and will create an even bigger gap shortly.