Dispatches From the Mommy Trenches

What, you think motherhood isn't like warfare?  You have obviously never met my oldest son, then.

Speaking of that little dissident, we had a terrible accident with him yesterday when his finger got caught in this hinged door we have leading to the stairs.  It was pretty gory, slicing through right under his fingernail, which he will probably end up losing.  There are few things more heartbreaking than holding your child as he screams in pain and not being able to do anything about it.  We got it all bandaged up and watched some Winnie the Pooh and Cubby calmed down within five minutes, but they were a bad five minutes.  Poor A. was holding him at the time of the accident and of course feels terrible, even though it was obviously nobody's fault.

The MiL mentioned to me today that while I was in the hospital, she and Cubby were playing in the shed, in which live many defunct machines that will someday be made useful (that's what I hear, anyway), and Cubby stopped and announced, "Engines are beautiful."  Right.  That's a good insight into his personality, don't you think?

If you're wondering why there have been no stories of the newest addition to the Blackrock family, that would be because Charlie doesn't do a whole lot yet.  And for this we are profoundly grateful.  I am probably jinxing myself here, but this child seems to be the easiest baby on the planet. He eats a lot, but when he's not eating, he's either sleeping or looking around quietly.  Cubby is exactly like A., so I have hopes that Charlie will be exactly like me.  I was well-known in my family for sleeping ALL THE TIME when I was a child and being very easy-going. (I know--what happened, right?)  It would be nice if Charlie were like that too.  He cries maybe twice a day, and then only when I have to undress him entirely because he has soaked himself yet again.


Speaking of soaking himself, I was unreasonably pleased with myself for thinking to copy the hospital's idea of using standard pillowcases as the sheets in the bassinet.  I have three sheets that are fitted for the bassinet mattress, and it's quite common for all three of those to be soaked through in a night, leaving me at 2 a.m. hunting for blankets to wrap around the mattress.  The pillowcases are a lot easier to just slip on and tuck in a little, and I have an unlimited supply of those.  I don't know why this never occurred to me before.

And now it's time for me to feed the milk monster again.  Over and out.

Remember when I said I could use some more patience for this next child to come, since it is not one of my many natural virtues?

Yeah.  I need it.  But not for this new one.  For the old one.  Cubby is taking all of what little patience I possess these days.  So send those patience vibes over the miles for me, would you?  Thank you so much.

And now, may I please direct your attention to this video of Guns N' Roses performing their song "Patience" in Tokyo?  Go ahead and watch; you won't be sorry.

1) Is that really Axl Rose whistling in the beginning, or is it a recording?  If it's him, he's the best whistler ever.

You all want to hear about the air conditioner, right?  I know.  It's too exciting to ignore.  Allow me to share.

A. turned it on the night before I got home, just to test it out.  And he found that it was pretty loud on the energy saver setting, because the condenser (or whatever--I'm fuzzy on the details) kept kicking on and off.  So he ascertained it was probably more practical to run it on the lowest "cool" setting instead.

He also decided to put it in the upstairs hall window, in the hopes it would cool all of our bedrooms enough for comfort.  It didn't seem fair that we should be cool and Cubby and the MiL should be sweating in their rooms across the hall.  As it turns out, our bedroom cools the least with this arrangement (whee!), despite being right next to the unit, and Cubby's room cools the most, despite being the farthest away from it.  Must be something to do with the draft from the stairs right in front of his door or something.

But even so, it was cool enough in our bedroom last night that I didn't have to have the fan blowing directly on me to sleep.  And considering it was still ninety degrees outside at 9 p.m. last night, that is saying something indeed.  I would have liked to have had the fan on, but I was afraid the baby would be too cool that way.  And a too-cool baby doesn't sleep very well.  Or rather, sleeps less than he would otherwise, which isn't saying much.  So no fan.  And the fact that I didn't actually need it was a welcome relief.

In other exciting homecoming news . . . The First Tomato has been consumed.  Oh yes.  AND, it's a tie for the very earliest First Tomato ever.  On this very date two years ago, I ate The First Tomato of 2010.  This year's first was, as always, a Stupice.  And I, as always, did not share.  I ate it secretly behind the cover of the enormous tomato plants while Cubby was busy pitchforking manure near the onions.  That's right--I don't even share The First Tomato with my firstborn son.  Or with my second-born son, but of course, he doesn't know what he's missing yet. 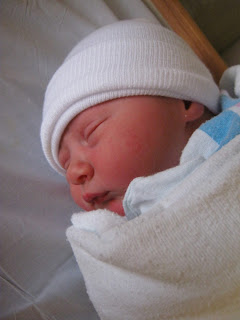 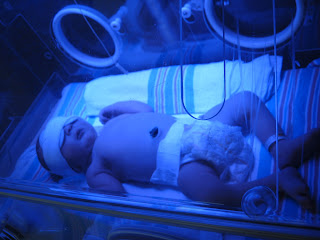 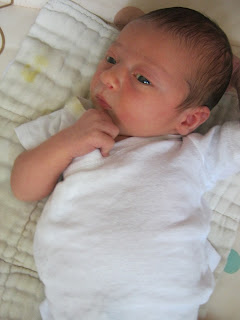 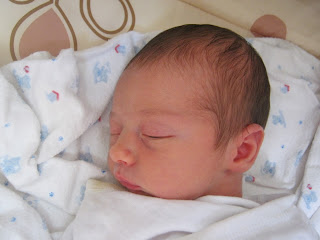 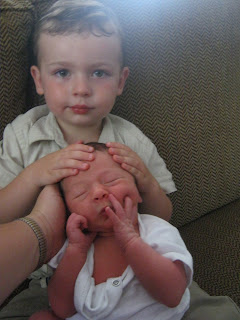 A. is on his way to the hospital right now with Cubby to get Charlie and me the hell out of here.  Soon we will be Blackrock-bound.

And then the real fun begins.  Hang on for the ride, duckies.
Posted by Kristin @ Going Country at 7:07 AM 5 comments:

If your next thought after reading that title was "Another day, another destiny, this neverending road to Calvary," then pull up a chair, my fellow Les Mis nerd, and let us sing of the red and the black.

And for everyone else in the world who doesn't know every word of every song in a Broadway musical about the French Revolution, that title just refers to the fact that I am still in the hospital.

I was SO looking forward to getting the hell out of here this morning, but no.  The pediatrician wants to keep Charlie under the lights for the rest of the day and then check to make sure all is well in the morning before releasing him.  So here I am, hanging out for another wild day of nursing, changing diapers, and staring at the revolting sign on the wall that says, "A baby is stardust blown from a hand above."

No, really.  That's what it says. There are so many jokes to be made there, I can't even start.

The big news today, though, is that A. called around 10:30 this morning to let me know that he had purchased a window air conditioner for our bedroom.

He figures if we run it only at night and on the energy saver setting, we should have just enough electrical current to get our bedroom to a reasonable temperature.  Say, eighty degrees instead of ninety.  Apparently, even A. was unsettled by the thought of bringing home a brand-new baby to an un-cooled house on a day that's supposed to be anywhere between 95 and 100 degrees.

Though in reality, since said baby is currently luxuriating quite comfortably in an isolette set at 89 degrees, I suspect A. might have been worried about that baby's mother and her reaction to those temperatures.  That is, me.  As well he should be.

It doesn't matter why he bought it, though; the point is that we have it.  Now let's all just cross our fingers that we don't black out the entire village or something when we turn it on . . .
Posted by Kristin @ Going Country at 11:32 AM 7 comments:

Did I say we were leaving the hospital today?  Scratch that.  Thanks to yet ANOTHER son who has the audacity to be born with a blood type incompatible to mine, I am once again hanging out in a hospital room, sleeping (or mostly not) by the obnoxious blue light of the infant incubator and feeding on demand around the clock.

Is it too much to ask to have a child born who actually shares my blood type and doesn't try to rebel against me from birth in this way?  Apparently so.

Yeah.  Charlie had some mild jaundice.  Thanks to our family history, the pediatrician decided to just keep him here and put him right under the lights to get rid of it right away.  The hope is that just the one night should do it and we can go home in the morning.

Much as I will be sad to leave this lovely air conditioning, I really need to get home.  Cubby, though he has been a trooper about spending so much Mommy-less time with Grandma and Daddy, is nonetheless still wondering what the hell is going on.  Last thing he knew, Mommy was going to the doctor on Friday morning and would be home to put him down for his nap.  Now here we are, three days later, and Mommy is still not home.  And Daddy does not know the words to Brahms' "Lullaby" (and can't carry a tune even if he did).  How is a boy supposed to go to sleep without Brahms' "Lullaby?  With difficulty, apparently.

Anyway.  Fingers crossed we get sprung tomorrow.  Being subjected to an extended period of this hospital food is again a traumatic experience for me.
Posted by Kristin @ Going Country at 2:04 PM 8 comments:

Labels: all about me, baby stuff, Charlie, Cubby

Know What We Haven't Talked Enough About?

The weather.  I really feel there hasn't been enough bitching here about summer heat, don't you?  And NOW, we can add a new and interesting dimension to the bitching with the arrival of the new baby.  YAY!

I don't know what it is, but apparently I only give birth to extreme sons.  Cubby was born in the winter.  But not just in the winter;  he was born during one of the worst stretches of winter weather we've had since living here.  It literally snowed every day his first week of life, accompanied by wind and very low temperatures.  Super for a newborn, let me tell you, especially in our house.

Charlie, in what is obviously his first assertion of differentiation from his older brother, decided to come during a particularly brutal heat wave.  Not that this matters when I'm sitting in the climate-controlled hospital, but that little idyll ends in about three hours.  And then it's home to our 85 degree bedroom, to cuddle close to a hungry little inferno all night long.  I made the mistake of looking at the forecast.  It's supposed to be 96 degrees on Tuesday.

I'm not going to look at the forecast again. It doesn't help my mental state.

But at least I'm not pregnant anymore!  There's always a bright side.
Posted by Kristin @ Going Country at 5:57 AM 5 comments: