(Photo placeholder until I'm home again to post one) 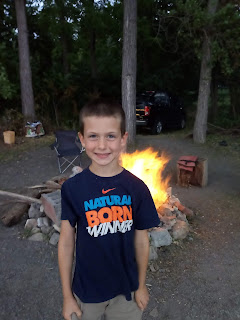 Happy birthday to
the one and only Charlie


All photos courtesy of the MiL. There will be many photos posted here when I get home--get excited--but for now, this is all I got.

Long version: The potatoes and cauliflower were from a couple of nights before when no one ate a real dinner because of too much watermelon and a baseball game. The food was already cooked, so I recycled them for this dinner with the addition of the hamburgers.

Long version: I had planned on bacon and eggs, but just as I was finishing the bacon, the power went out. Thus, the bacon was accompanied by non-perishable foods that required no further cooking.

I didn't eat, because after I got everyone fed and had Poppy in bed, I left the house by myself and went to a party. Shocking, I know.

There was food at the party, but I was so busy talking to people that I didn't eat there, either. It turns out many people are curious about our current life in the back of beyond. So I had some tortilla chips after I got home. Healthy.

Long version: A.'s sister grilled the corn on the cob on the beach, along with a rack of ribs. I threw on a boneless sirloin steak and some hot dogs. This happens a lot on the beach: various meats are cooked on the fire grate and accompanied by whatever is easy to pack in a bag and transport to the beach. But this time the MiL made and transported fresh cornbread with butter and honey, which definitely elevates a beach picnic.

Also this day, A. launched the boat he made with Cubby the few days before: 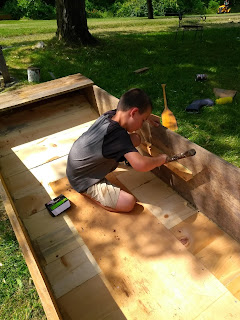 Why? Because Cubby wanted to build a boat. And because A. likes to build boats.

Long version: The MiL just got one of her brother's pigs butchered, so we had real pork chops. I was so happy. They were so good. Especially since they were cooked over an open fire. Delicious.

Long version: Cubby harvested the scapes from the MiL's garden for me, but they were really too mature for eating. They should be cut when they're still curly. These had straightened out already, which meant they were hard and woody. Some were okay, and I cooked them all anyway and brought them down to the beach. They were all eaten, although many were chewed for the flavor, then spit out and thrown into the weeds. Kind of like sunflower seeds. Perfect beach food.

And I did not buy it. I was tired and rushed and frazzled and I didn't want to deal with a giant 30-pound (at least) watermelon in an already-chaotic vehicle. I regretted this as soon as we drove away. I still regret it, and if we go back the same way, you bet your dupa that I'm stopping and buying the dang watermelon.

Cubby and Charlie had a riding lesson this day: 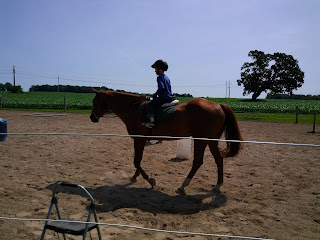 Even Jack got to ride around with someone leading the horse: 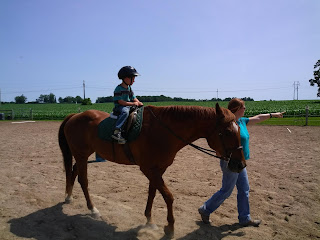 Totally made his day.

Long version: I had asked A. to buy a picnic pork shoulder for me to make pulled pork for our return trip to New Mexico (trying hard not to think about that too much yet). I don't know why, but it is very, very hard to find large pork roasts for pulled pork in New Mexico. It's not hard here.

I put the pork shoulder in the MiL's Crockpot in the morning and put the Crockpot out in the shop so it would be out of the way. This turned out to be an excellent idea because it got to over 90 degrees in the afternoon and it was no day to be heating up a kitchen or standing out in the hot sun over a fire on the beach. The pork was definitely done by 2 p.m., at which point I shredded the pork and added it back to the Crockpot with my favorite (New-York-state-specific) barbecue sauce and left it on warm.

I had gone to get my hair cut at 3:45 p.m., because the nearest place for me to get it cut at home is an hour away, so the last time I had it cut was when we were in Tucson for Thanksgiving. I went to the nearby grocery store before that to get hamburger buns and potato chips, so when I got home, all I had to do was put the crock part of the Crockpot in a bag and haul it down to the beach with the rest of the stuff.

And I think I have enough left over to freeze and bring on our upcoming road trip. Bonus.

Long version: There were like twenty people on the beach this afternoon--eight of them young children--and someone cooked a bunch of hot dogs and sausages around 2 p.m. My children of course ate some of these, so I thought maybe I could get away with just tortillas and cheese or something after I brought them up to the house for the night. This was a relief, because it was brutally muggy and quite hot and I really did not want to cook the hamburgers I had planned on making.

At 4 p.m. when I came up to the house to get my evening cocktail--gin is pretty much mandatory for me to get through an evening on the beach with any sort of enjoyment--Jack told me he wanted to come with me because he was hungry. I figured if he was, other people would be, so when we got up to the house, I very quickly browned some of the ground beef I had out for hamburgers, added a can of rinsed black beans, some salsa, and some shredded pepper jack cheese and brought the whole hot skillet down to the beach (wrapped in a towel) with a bag of tortilla chips to scoop it with.

This was the first day that my children did not consume a single fruit or vegetable all day. Unless you count the salsa in the meat. I think this means we're reaching vacation saturation.

We leave Monday to start our drive back to New Mexico. We might take it a little slower and spend an extra night on the road to see some more things on the way, so we might not get home until Friday. In that case, no Friday Food for you. I'm sure you'll survive.