Yeah, I Love This One Too 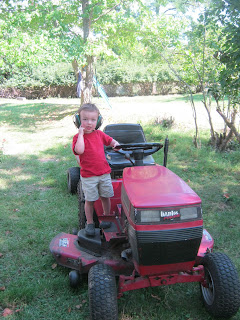 This is Cubby going to Alaska to fish for salmon, that he will then cut up and fry for dinner. I know because he told me so.
Posted by Kristin @ Going Country at 10:59 AM 3 comments:

I was all set for an awful afternoon yesterday, courtesy of modern medicine and the vaccinations given to my baby yesterday morning.  I still have bad memories of the screaming of an outraged and somewhat feverish Cubby after his two-month vaccinations.  So I braced myself and told A. I might need some help with Cubby yesterday afternoon if Charlie required serious comforting.

And then Charlie conked out at 10:30 a.m., not to awaken again (except for a few milk re-fuelings and diaper changes) until about 5:30 p.m.  That's right.  Seven hours.  And when he finally woke up, this is what I saw: 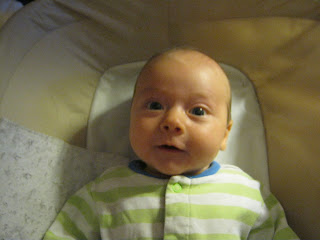 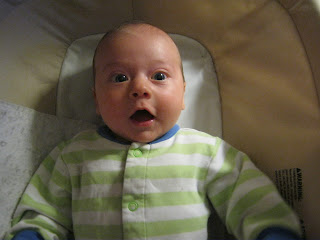 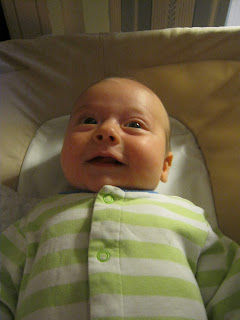 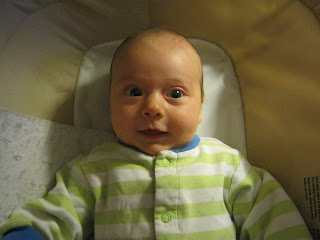 Charlie had his two-month check-up today, which means shots.  And lots of 'em.  The only thing worse than holding your baby while someone jabs multiple needles into his defenseless thighs is doing it with a running commentary courtesy of the two-year-old, at top volume to be heard over the baby's screaming.  "Those are needles!  That's the medicine!  The baby is crying!"

Unlike Cubby after his vaccinations, Charlie did not wait until we got home to start shrieking.  Instead he elected to scream at full volume the entire way home in the car.  That's half an hour of continuous screaming, with a few seconds of subsiding to whimpers in order to catch his breath, and then resuming the screaming.

He fell asleep right after we got home, though, and is still sleeping now.  Cubby is sleeping too.  Mommy would like to be sleeping--or possibly indulging in a liquid lunch--but instead I think I will go check for chicken eggs in the shed.

Oh, were you wondering about Charlie's stats?  He's 12 pounds, 7 ounces and 25 inches.  Which means he's of average weight and the longest two-month-old you'll ever see.  That's why he's currently wearing clothing in the six-months size.  Craziness.

Kristin's Kitchen Tip of the Week

Okay, so maybe "of the week" is a little misleading, since I don't actually post a kitchen tip every week.  Or even every month.  Or, uh, even every year.  In fact, it's possible the only kitchen tip I have ever posted was this one about how to cut corn kernels off the cob without creating a blizzard of corn kernels in your kitchen.

On to the tip!

Next time you make mashed potatoes or polenta, throw a whole, peeled garlic clove in with the boiling water.  You can mash it right into the potatoes and leave it in the polenta when everything is cooked.  It doesn't make them taste like garlic really, just . . . good.  Flavorful.  I've been doing this with mashed potatoes for awhile, but just tried it with polenta last night.  It's really, really good.

And that should take care of my kitchen wisdom for the next three years.

Any good cooking tricks to share, duckies?  Fire away.
Posted by Kristin @ Going Country at 6:11 AM 8 comments:

I have mentioned before that the grocery store version of any kind of food sucks if you've ever had that food when it's been grown, raised, or caught straight from nature. We had another startling example of this last night when we ate some salmon.

Now.  I am not a fish fan.  I eat the fish A. catches, and it's okay, but I don't go wild for fish like some people do.  My previous experience with salmon has been, in a word, gross.  The fishy smell and flavor are absolutely appalling to me.  So when Mr. Jason returned from his annual two-week Alaskan salmon fishing expedition and presented us with ten pounds of salmon fillets he had caught and processed himself, I was apprehensive.

For one thing, ten pounds of Sockeye and Silver salmon is worth about two hundred dollars at market prices.  So I really didn't want to screw up cooking it.  For another, it was incredibly nice of him to give some to us and I really wanted to like it.

So I put my faith in my belief that most food only sucks when it's from agri-business and cooked a few pounds of Sockeye salmon last night.  The color is shockingly red when raw and is quite amazingly pink when cooked.  I broiled it plain last night, just so we could really taste the flavor.

The verdict:  Yeah, it's just grocery store salmon that sucks.  This fish had slightly more of a fish flavor than the white-fleshed trout and pike A. catches in our lake, but it was certainly nothing disgusting.  Cubby ate an enormous portion because, unlike me, he's all about the fish.  Good for his brain and all, I guess.  Everyone else was appropriately impressed with it as well.

So the moral of this story is that if you want to eat really good salmon, you need to have a friend who goes salmon fishing in Alaska every summer and then presents you with wild salmon straight from an Alaskan river.  Start hunting for that friend now.  You can't have Mr. Jason; we've called dibs.
Posted by Kristin @ Going Country at 6:35 AM 5 comments: