Three years ago almost exactly, I was agitating for a minivan.

There are words that several years ago I never thought I would string together. Such is the mindset induced by the imminent arrival of a third child, however.

This was shortly after Big Red left us and A. wanted to get another pick-up truck. I wanted a minivan. He thought I could manage all three kids in the Subaru. I told him the Subaru is technically mine, and if he wanted to get a pick-up, that was fine with me, but I would trade in my Subaru for a minivan.

About two days after that conversation, A. called me from work to tell me he had bought a minivan.

It was only eight years old, but he bought it for just over $2,000 (from a private seller) because it was rusty.

Kind of a lot rusty, as it turned out. But it also turned out to be an exceptionally good vehicle for us. We've had to do very few repairs on it in the last three years, and it never once actually broke down to the point that it was undrivable.

But still. Rusty. And that is a problem that is not improved by all the salt used on roads in upstate New York in the winter.

Finally this spring, we decided it was really time to look for another vehicle. A. has been looking around online, but the selection is pretty limited in our vicinity. Especially because the coming fourth child is going to mean that even a minivan won't be very big with all the seats in use. The cargo area in the back isn't big enough to hold the dog.

(Actually, the selection is mostly limited because we won't go to a dealer and pay many thousands of dollars for a new vehicle. That's not our style. Our style, apparently, is to buy a rusty van for $2,000 and drive it for three years as it slowly disintegrates. Works for us.)

So A. has been trying to decide if we should get a Suburban (which doesn't really seem that much bigger than a minivan, frankly), or a full-size, no-messing-around, 12-passenger van. With the van, we can remove the back row of seats and have a big cargo area.

I think we should get the big van, if only because I can't see our need for space in a vehicle decreasing in the coming years as the children grow ever larger. I mean, I don't particularly want to drive a small bus, but these are the results of choosing to have a family of six people and a dog.

Anyway, this debate will shortly be closed, because we need to buy another vehicle right now. Last night as I was driving Charlie and Jack to a T-ball game, I felt something go wrong with a wheel when I turned and then could hear (and smell) some serious friction thereafter. Luckily, I managed to make it home. This morning A. diagnosed a fatal suspension failure due to rust. It could be fixed, but when the undercarriage is as rusty as this one was, what can you attach a new part to that won't fail pretty soon itself?

So we called the local mechanic to come haul it away for us (both Randy and Andy showed up, which amused me to no end), leaving us with $120 in cash and only the Subaru as the family car* for the moment.

Guess A. got his wish of three kids in the Subaru after all. For the moment, anyway. And now the hunt is on for the next family bus. Should be exciting. Stay tuned to see what we end up with . . .

* But only after some serious cleaning out. A. does not maintain a car in a fit state for family use, as you may recall. In fact, when I remarked during my cleaning that there has been some irrevocable damage to the hatchback carpet, he admitted, "Well, there's been a few carcasses back there over the years." Indeed.

I Feel a Ramble Coming On


Let's start with today and work our way back through some random photos of the past week or so, shall we?

It snowed off and on all day yesterday, and this morning I woke up to this. 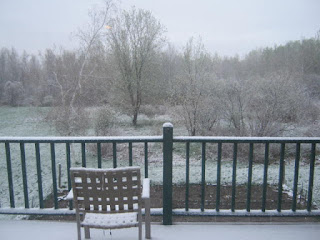 I may have said out loud, "You must be kidding me." Except I didn't say "kidding."

But now I have some black-eyed peas simmering away on the stove, so I'm making the most of what I hope is the last snowy day we have for a long time. I know, it's not New Year's Day and therefore it will not do much perhaps for my happiness in the future, but simmering stuff helps to warm the house up. Plus, they taste so good they'll ensure happiness for the duration of dinner anyway. And I had half a bag of dried black-eyed peas to use up. So there you go.

Speaking of Food I Make (which I usually am) . . . behold, the only sushi just south of the Canadian border. 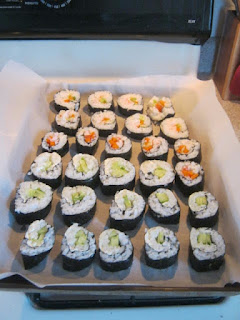 Well, maybe my neighbors eat this all the time, but I really doubt it.

They were very easy to make. I ordered most of the ingredients from Amazon, as my local stores don't carry anything like nori (the dried seaweed sheets everything is wrapped in). Honestly, the hardest part was getting the nori sheets out of their bag without catching them on the edges and tearing them.

So what I did was, I made the rice as instructed on my bag of rice and seasoned it as suggested in this post. While I was at it, I also made some quick-pickled carrot and cucumber sticks loosely based on a recipe from here, but with a little salt added, because a pickle without salt? No.

I did not use raw fish. There is no sushi-grade raw fish anywhere within two hundred miles, I'm pretty sure. Well, unless I had A. catch me a fish, and then I froze it to guard against worms or something, and sliced it reeeeally thinly, and . . .

I made a test roll with pickled vegetables and green onions in it and ate it all myself with pickled ginger and soy sauce while everyone else was either at church or sleeping. I found that even my relatively dull and cheap chef's knife sliced just fine, if I cleaned it off sometimes. 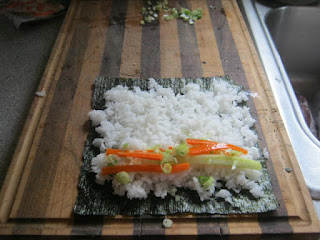 My very professional equipment. I declined to buy a bamboo sushi-rolling mat.

Each rolled sheet resulted in about eight pieces. We had no trouble eating all 30 or so pieces I ended up with (not counting the test batch already in my belly).

Everyone except Charlie loved them. But then, Charlie told me last night that he doesn't like (homemade!) pizza, so you can't trust him.

Cubby ate most of the crab ones himself and brought the few leftovers to school for lunch the next day. I mostly ate the cream cheese and cucumber ones, which are my favorite. Jack and A. ate everything.

It was fun. They were good. Good thing, since I have about 45 nori sheets left.

And last but not least, baseball/T-ball season has begun! 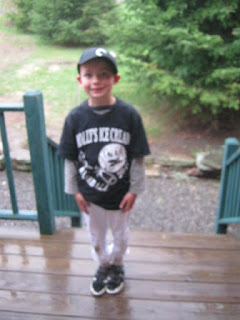 And I have a really blurry picture to prove it. 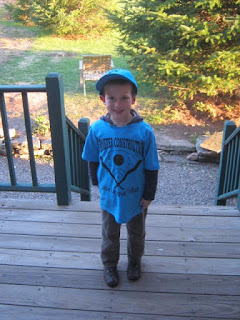 This is the first year either of them has played. Cubby LOVES it, and shows promise of being a good player. Charlie . . . well, Charlie is "saving his energy for soccer."

He doesn't love it*. Not that I blame him because, let's face it, four-year-olds can't actually play T-ball, and it's about the most boring thing ever standing on the field watching eight kids in a row swing and miss or whack the T or hit it all of two feet or whatever.

Two games a week for both of them for the next month means a lot of time spent on ball fields for all of us. I guess it really is spring. Despite the weather.

* You may be asking yourself, "Does Charlie love ANYTHING?" Good question. The answer is: Not much. Though he was very enthusiastic about the desperation meal of scrambled eggs and tater tots I made when I was sick last week, so I guess that tells you a lot about Charlie's preferences. He definitely landed in the wrong family.

Labels: all about me, Charlie, Cubby, family, fun with food, randomness, the A team, the great white north, weather

Oh, What a Relief It Is


This morning was the first morning in six days that I've awakened not feeling ill. I celebrated by having my single cup of beloved coffee with chicory. And now I've started preparations for making sushi rolls for the first time.

* Definitely no pun intended, because that would be terrible.
Posted by Kristin @ Going Country at 7:28 AM 3 comments: