Long version: I cleaned out the small freezer over the refrigerator and found . . . MORE ELK!

I thought I was done with the elk, but it wasn't done with me.

There were two small bags in there. One of pretty gnarly pieces I had trimmed off while making something else and that A. had insisted I save, and one of a rather large and clean chunk that I have no memory of whatsoever.

Anyway, with those, and a container of cooked posole leftover from A.'s last stew (found in the freezer excavation), plus onion, garlic, and tomatoes, I made him more stew. It also had green chilis in it, which I thought would make it really spicy, but didn't. Usually, I think the amount of chili I'm using will be mild, and then it isn't, so obviously, chilis remain a mystery to me.

I added leftover rice to it, too, which made it quite filling.

I also made a curry stew with some curried split peas I had made the day before and to which I added far too much curry powder. So to tone it down, I added a container of beef juices and tomato juices leftover from cooking a brisket (also from the small freezer, yes), potatoes, carrots, green beans, and sour cream.

Charlie, who is not a fan of curry, had the elk along with A. The rest of us had curry, and everyone had garlic bread.

Long version: Nothing too exciting here, although making more brisket meant another opportunity to make rice pudding. This time I made it without raisins for Charlie, who doesn't like them, and added the raisins to the bowls of those who wanted them.

Those bowls were consumed* for breakfast the next day because we've been out of cereal for a few weeks now and there must be a special Sunday breakfast before church. And the special breakfast must be fast, because church is at 8 a.m.

Long version: I make a lot of hamburgers, although I really don't enjoy doing it. And the reason I don't enjoy it is because of this: 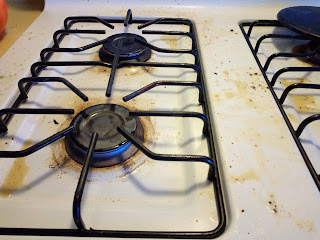 Guh-ross.
"But Kristin," you say, "Why don't you just use a spatter guard or lid?" Because I have to fry so many dang hamburgers that I use the cast iron griddle pan that goes across two whole burners. And that means a lot of spattering grease.

The oat bars were Cubby's choice for our Sunday dessert. He likes to go through my old Better Homes and Gardens Cookbook and find different recipes to make. This one called for quick-cooking oats, which I don't usually have, but Miss Amelia had given me a big container awhile ago. So I was happy to use some of those up.

The method was to make a crust by cutting butter into the oats and flour and sugar, then putting on a layer of fruit filling and a bit more of the oat mixture on top.

I had some ground almonds and sugar in the freezer that have been hanging around since I made cheesecake for Cubby's birthday in February, so I decided to use that instead of flour so A. could eat this, too. I also added a bit of the last of the coconut flour I wanted to use up to the crust.

There were a couple of options for the fruit filling, and Cubby chose the apricot one. It was supposed to be apricot and coconut, but we didn't have any coconut. Instead I put in the rest of the coconut flour, which thickened it up nicely.

It came out well, although it was quite sweet. A. ate it with some maple-syrup-sweetened yogurt (in lieu of cream, which we didn't have) and loved it. Everyone except Charlie enjoyed theirs, too. I don't care for coconut flour, so I wasn't wild about that, but with regular flour it would be quite good.

It's certainly not a recipe I would have chosen myself, so hooray for expanding horizons and all that.

I'm down to my last jar of New York State barbecue sauce, so I didn't use it for the ground beef. Instead I just added ketchup, mustard, maple syrup, and vinegar until it approximated the taste of the sauce. No one noticed, so I guess I'll do it that way from now on. 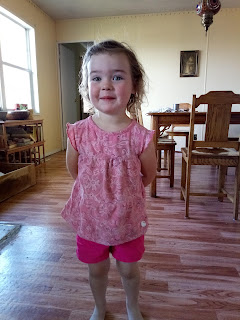 Yes, shorts in October. And an almost-freeze in early September. Welcome to the high-altitude west.

Long version: During our very first summer in New Mexico, when we were still in our rental house, A. grew saffron crocuses. From those flowers, he painstakingly harvested a tablespoon of saffron. I used some of it to make paella a year or so ago, and I was waiting until I had a "clean" chicken (that is, not from a store) to make it again.

Then, last month, my friend asked us if we wanted one of her turkens that turned out to be a rooster. Because everywhere we go, we are a magnet for unwanted roosters.

Turkens, incidentally, are bizarre-looking chickens. They get their name because they have no feathers on their necks, like a turkey.

A. killed it and skinned it, and it's been sitting in the freezer since then.

I decided the time had come to use it, and the saffron. I didn't make the paella this time, though, instead making Arroz con Pollo, which is a very similar dish. It's usually made with bone-in chicken pieces, but it's really hard to cut up home-raised chickens, because their bones and joints are much stronger than a commercial chicken.

I decided to just poach the turken until I could pull the meat off, which also gave me lots of nice stock to use. Then I cooked onion, garlic, one small bell pepper I had in the garden, the saffron, and a bunch of diced tomatoes in with the chicken chunks until the tomato was cooked down, at which point I added the rice and stock. And then frozen green peas at the end.

A. was in raptures over this meal. Cubby was thrilled, too. I was not. And that is because saffron has a distinct flavor of iodine that makes it taste like fish. I don't like fish.

A. and Cubby do, though, and I'm fine with being a plebeian in this case.

Long version: A work day is always a good opportunity to use up some leftovers.

A., Poppy, and Jack finished up the elk chili rice stew thing. Cubby and I had the leftover curry stew (with rice added). Charlie had some of the ground beef sandwich meat, but over rice. And no one had a single extra vegetable other than what was in their stew or whatever.

Long version: Our fall cabbages are much, much smaller than the ones we planted early in the spring. I suspect that's because of the hot weather and the insects that plague the cabbages in late summer. However, even a small cabbage makes quite a bit of coleslaw, so that's what I did.

* Perhaps I should have specified that the bowls of rice pudding were consumed, but I trust you are all intelligent enough to infer that we did not eat the actual bowls.

I had an amusing (to me) thought this morning as Poppy and I were putting yogurt into the cooler to ferment.

There were currently four different things fermenting in my kitchen at that very moment:

And a kind of beer A. has started making called kvass. (It's traditionally made with rye bread, but he uses my sourdough bread heavily toasted, and adds yeast and extra sugar to up the alcohol content.)

Sandor Katz would be proud.

I am the first to admit that I am not a scrupulous housekeeper. I don't scrub my baseboards with any regularity, and my kitchen floor definitely goes longer than it should in between dates with a mop. Dirt doesn't bother me that much, but clutter?

This is unfortunate, given that I live in a house with five other people. I don't care how much of a minimalist you are, even minimal possessions times six adds up to a lot of stuff. And the one place where that stuff seems to just explode is the front entryway of our house.

And that's why, when you walk into our house, this might be the first thing you see. 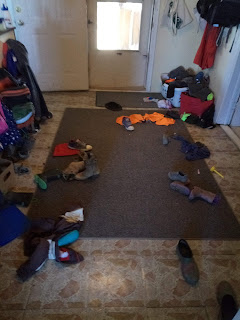 Ugh.
That's actually a little worse than it usually is, but there are ALWAYS someone's shoes in the middle of the floor, or the bin of gloves and hats has been overturned so they can all dress up as Meatish Monsters (I don't know, either), or whatever. Chaos and confusion reigns.
It's actually a pretty big area, and there are some places in the corners where I could probably put up shelves or something to contain things a little better, I just . . . haven't. It's not like we have a Container Store nearby.
And so I just continue nagging children about shoes and constantly toss things back in bins.
So what's the most irritating spot in your house? And do you have any suggestions for what I could do with mine? (Other than move out and live in a tiny house all by myself, which is sadly not an option.)
* At least. Some of them also have cowboy boots, or more than one pair of shoes, or moccasins, and then there are the winter boots . . . SO MUCH FOOTWEAR.
Posted by Kristin @ Going Country at 5:54 AM 4 comments: