Well. Yesterday sure was depressing. Regardless of who you supported in the infamous presidential election of 2016, I think we can all agree that the general mood of the nation yesterday was less than jubilant.

So how about something less depressing? Like these goobers. 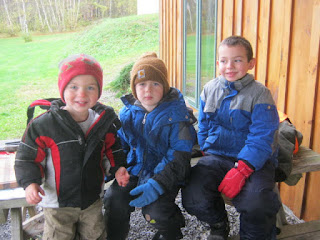 Onward and upward, my lovelies. For the children, if for no other reason.

A Really Major Plus


Hey, know what I'm not doing, even though it's fall? Picking up black walnuts. Or raking.

Labels: all about me, randomness, the great white north


You were all just desperate to know what I did in Montreal, weren't you? No? Well, I'll tell you anyway.

I mean that in a literal sense, actually, because I have the worst sense of direction ever, and I didn't even have a map of the city. I had a map to get to the city, which was only helpful until I crossed the St. Lawrence River, at which point the detours started and I had to follow signs that looped me hither and yon, around and around, and possibly to Narnia. It was insane.

Eventually, however, the detour ended and I managed to work my way back to the street I actually wanted to be on. After parking, I got out of the car and found myself by the Ritz Carlton Montreal. Which meant I was in the fancy hotel district and, shortly, the fancy shopping district.

I have little interest in Cartier, however, so I just started walking along one of the main thoroughfares, marveling at the quantities of stores and the frenzy of consumption on display.

Obviously, I am not the consumer the business community of Montreal is hoping will visit. I didn't see a single store that sold snow pants or Secrets of Eskimo Skin Sewing, both of which were in my latest Amazon Prime order.

I did see, however, the Barbie Expo, mostly because the building that houses it also has a public bathroom. Let me tell you, nothing prepares you for the sight of all the Twilight characters rendered as Barbie and Ken. There was also a particularly strange Barbie dressed as a lion that I'm pretty sure would give a kid nightmares.

I walked until I found myself by Christ Church Cathedral, which is certainly worth seeing. Apparently, Mark Twain commented that you couldn't throw a brick in Montreal without breaking a church window. It might not be strictly true in the present day, but there are certainly a plethora of churches. I only went into two this time (I also went inside the Mary, Queen of the World Cathedral), but I passed at least half a dozen.

At one point when I got really lost, I also stumbled upon an imposing stone building whose engraving told me it belonged to the Black Watch, the 5th Highland Regiment. It didn't seem to have any activity around it, and didn't have any informational sign or anything, but I did see a man swipe a pass card to get in the front door, so I figured it was still in use as their headquarters or something and moved on. But now, looking it up, I see that it's actually a museum currently closed for renovation.

I also ate a chocolate-filled croissant, flank steak with shallots and French fries and a glass of wine, and some gelato--not all at the same time--and stopped in two places to finish the book I'd brought along*. Then I managed to find my car again and set back off for a 30-minute tour of random outlying Montreal neighborhoods, a.k.a. the Route 138 detour.

I got home just as the family was finishing dinner. Later when I asked A. how his day was, he said, "Oh, you know. It was kind of boring. We ate some things from the refrigerator, the house got messier and messier . . ."

Yup. My daily life in twenty words or less.

It was a good day, though. Sometimes getting lost is just what you need.

* The Book of Life by Deborah Harkness, which is the last in the All Souls trilogy and a REALLY heavy book to be carting around a city all day.
Posted by Kristin @ Going Country at 4:04 AM 5 comments:

Labels: all about me, the A team, travelin'
Newer Posts Older Posts Home
Subscribe to: Posts (Atom)