Two Thugs and a Baby

My children have been driving me a little bit mental of late. Good thing they also make me laugh. 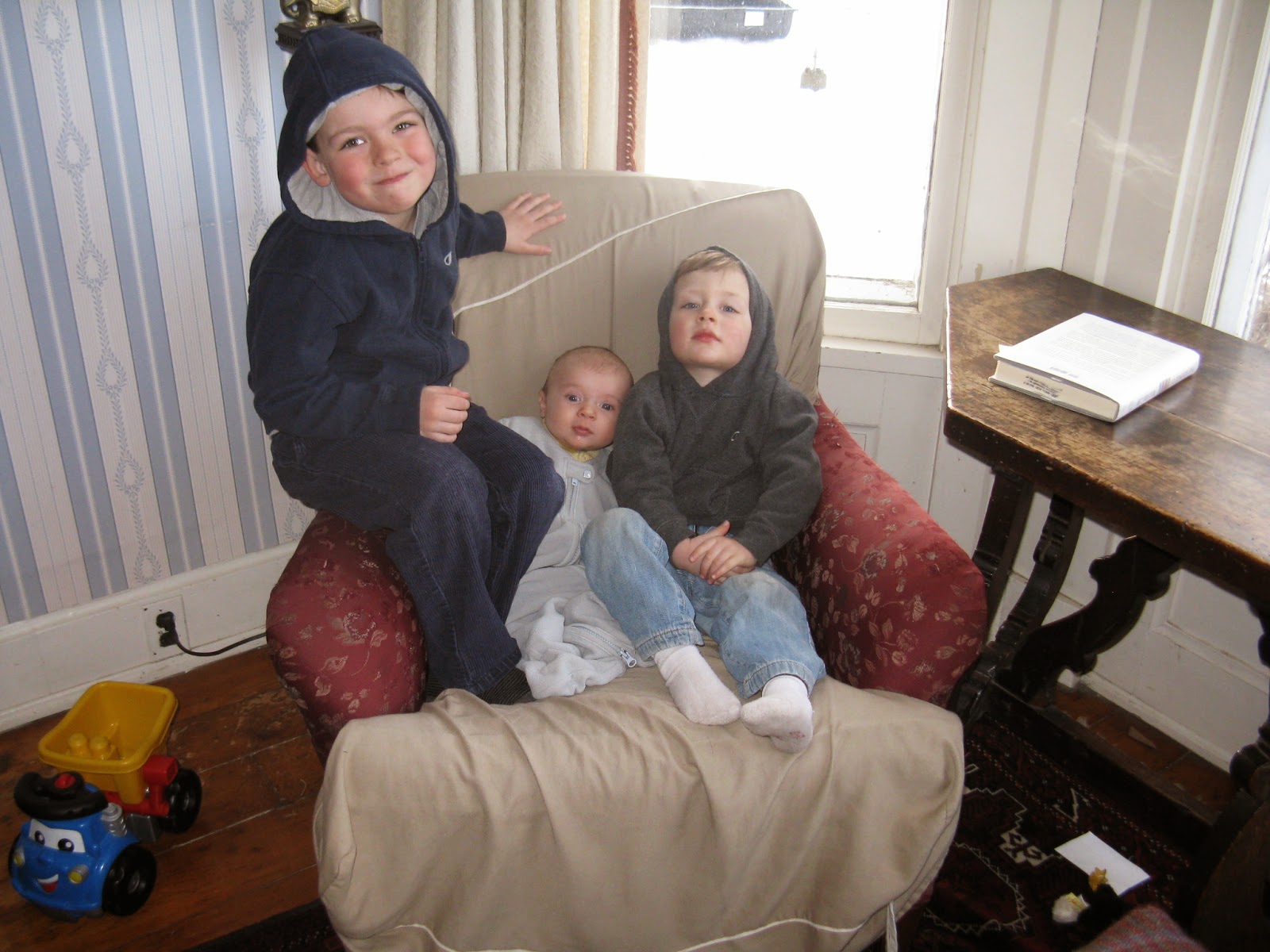 Labels: all about me, brothers, Charlie, confessions, Cubby, Jack

Yesterday I discovered that I can rescue the maple syrup/sugar*; prepare the corned beef brine; make coleslaw, cornbread, and barbecued beef for dinner**; do two rounds of dishes; and clean the dining room all in one day while also keeping the children alive and fed. But I cannot do all of that and exercise too, apparently.

There just aren't enough nap minutes in the day.

* In case you need this information in the future . . . I added some of the not-yet-boiled sap, plus a little more hot water, to the sugary syrup until the boiling syrup got to 220 degrees. And now I think I will always just use the damn thermometer to start with. Lesson learned.

Labels: all about me, country wisdom, domesticity, fun with food

Jack is celebrating his three-month birthday today. And how is he celebrating? By donning the Cubby Suit (which later became the Charlie Suit) to protect him from the Definitely-Not-Spring weather. 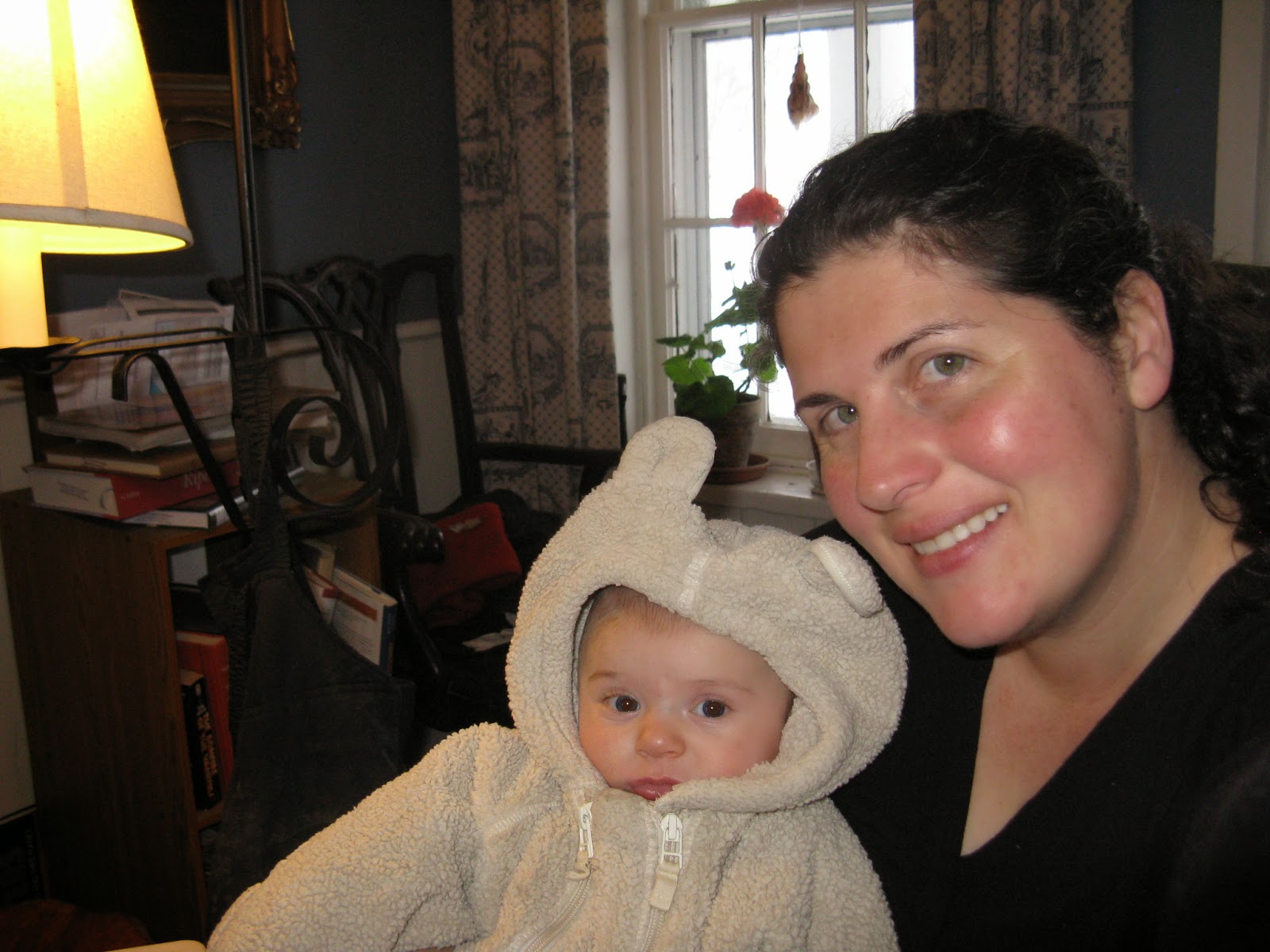 He's thrilled, as you can tell.

There was a serious snow squall going on when I hauled all three kids out to get to preschool. 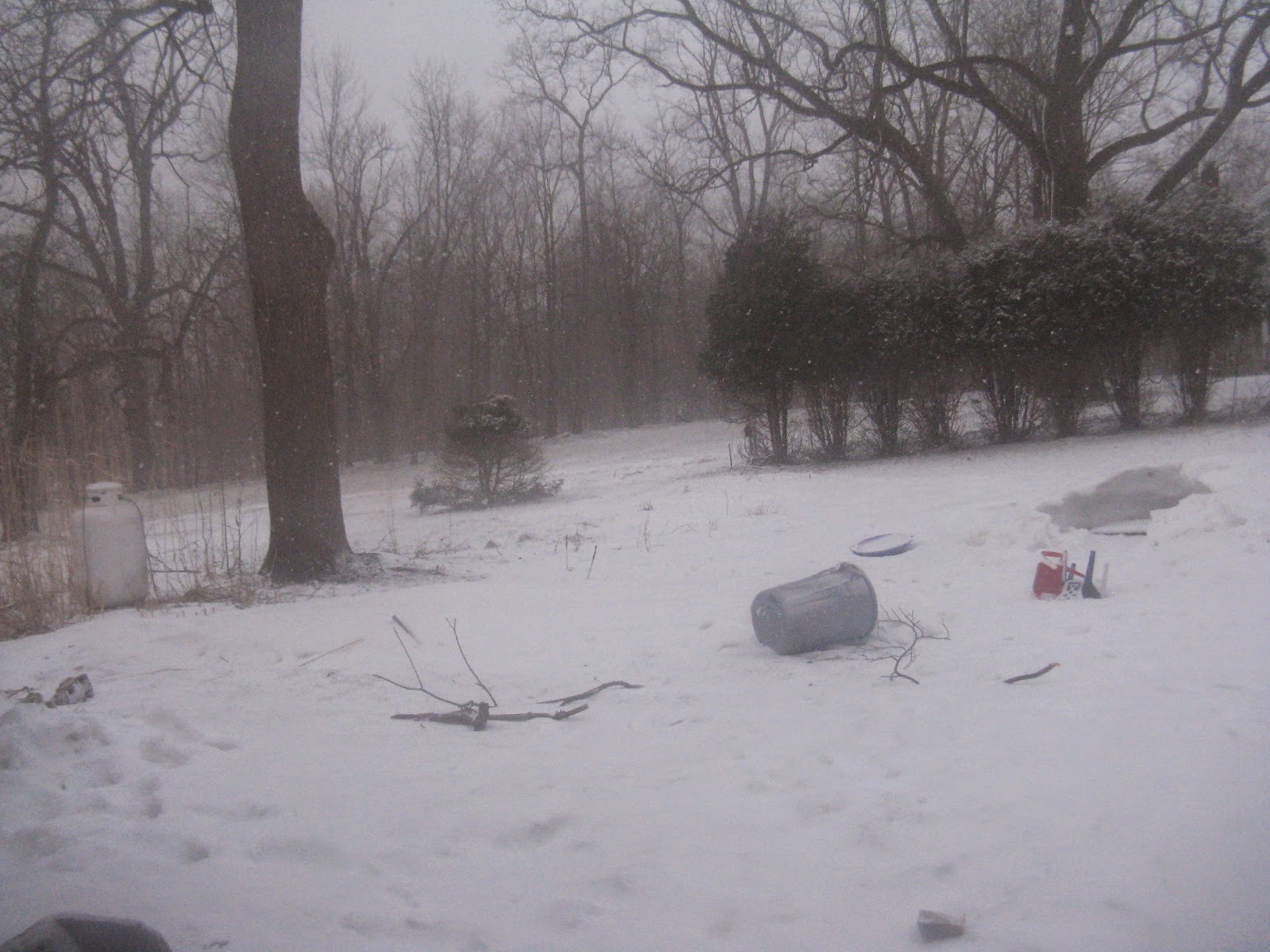 Because I am perpetually unprepared when it comes to a blanket to drape over the car seat, Jack got a little snow on his face. He accepted that indignity with his customary good humor, however, not even crying when the snow flakes landed on his little cheeks. Blankets always fall down over his face anyway, so maybe the snow is less annoying than that.

Or maybe I'm just justifying my own laziness. Probably that.

Labels: all about me, Cubby, Jack, weather

Beating Back the Old Man

Yesterday got to over fifty degrees and the older boys spent the whole afternoon outside without their coats, hunting and spear fishing in the small stream in the hollow. Cubby informed me that all he managed to spear were rocks, but considering he doesn't have a real spear--and the fact that there are no fish in that stream that I'm aware of--I can't say I'm surprised.

Then, of course, Charlie stepped in a deeper part of the stream and filled his boots with freezing water and returned to the house wailing about being cold. Well, yes, Charlie. I can see why you would be. It is still March, after all.

It's not spring yet, not by the calendar and not really by the weather, but small signs are appearing. Cubby burst into the house yesterday morning to announce, "Mommy! The most exciting thing! WE FOUND THE FIRST SNOWDROP!" Exciting indeed, my lovely.

We boiled sap this weekend and ended up with half a gallon of syrup. Which looked runny, so I reduced it some more and then ended up with a kind of sludgy half-sugar, half-syrup. Whoops. Now I get to experiment to see if adding back a little bit of thin sap and re-heating will make it back into syrup. Stay tuned.

And perhaps most importantly, A. got the water pump running to fill the cistern last night when he got home from work. No more paying the water guy. Hooray.

Yup, spring's on the way. We'll just ignore the snow in our forecast for today. And the lows in the teens for the next week. Because Old Man Winter's time is limited now. Ha.

P.S. I would wish you a happy St. Patrick's Day, but I'm ignoring it because I totally failed at getting my brisket in brine to make corned beef, so our St. Patrick's Day celebration is going to be, uh, five days after whenever I actually manage to do that. Yes, I am lame. And no, I do not care.
Posted by Kristin @ Going Country at 3:54 AM 2 comments:

Labels: all about me, Charlie, country livin', Cubby, fun with food, randomness, the A team

When Life Hands You Dead Birds

Yesterday afternoon, the MiL mentioned to A. that she had seen a dead Cooper's Hawk under the forsythia bushes. Cooper's Hawks hunt small birds, and we have large flocks of English sparrows that move into the forsythia bushes in the winter, so I guess that's why it was there. It turned out to be an immature hawk, meaning not a skillful-enough hunter to make it through this awful winter.

Cubby had actually told me a few days ago that he had seen a bigger bird hunting the English sparrows by the forsythias. I half-consciously registered this bit of information, since I was probably busy making dinner or changing Jack or something equally engrossing at the time, but I remembered this when the MiL told A. about the dead hawk.

So I told A. he should show it to Cubby and Charlie before he threw it in the gully.

Next thing I know, Charlie's wandering around the house with a dead Cooper's Hawk clutched to his chest.

I told him to take it back outside. A dead bird isn't quite as bad as a live lamprey eel, but I think it still definitely falls in the "outside only" category.

Five minutes later, I went outside to find Cubby flying the dead hawk around in his hands, pretending it was hunting, with Charlie following along behind.

Yes, my sons were playing with a dead bird as if it were a toy plane. And I didn't even stop them. I was a little repelled, but I just told Cubby that he could play with it now, but then it would have to be thrown in the gully because it was going to start rotting soon.

Five minutes later, Charlie was screaming his head off in the garden because Cubby had tossed the hawk into the gully as I had instructed. But Charlie wasn't done playing with it.

And it was at this moment, as I comforted Charlie about the loss of the dead bird that had been their play thing, that I really had to wonder how in the hell I got here.
Posted by Kristin @ Going Country at 7:12 AM 4 comments: